Astronomers use models to derive properties of individual stars that we cannot directly observe, such as mass, age, and radius. This is also the case for a group of stars (a galaxy or a star cluster). How do we test how accurate these models are? Well, we compare model predictions against observations. One problem with current stellar population models is that they remain untested for old populations of stars (because they are rare). These old stars are important because they produce most of the light from massive elliptical galaxies. So a wrong answer from model means a wrong answer on various properties of massive elliptical galaxies such as their age and metallicity. (Houstan, we have a problem.)

Fear not — this paper introduces fluctuation spectroscopy as a new way to test stellar population models for elliptical galaxies. It focuses on a group of stars known as red giants, stars nearing the end of their lives. The spectra of red giants have features (TiO and water molecular bands) that can be used to obtain the chemical abundances, age, and initial mass function (IMF) of a galaxy. Red giants are very luminous. For instance, once our beloved Sun grows into old age as a red giant, it will be thousands of times more luminous than today. As such, red giants dominate the light of early-type galaxy (another name for elliptical galaxy). By looking at an image of an early-type galaxy, we can infer that bright pixels contain more red giants than faint pixels. Figure 1 illustrates this effect. Intensity variations from pixel-to-pixel are due to fluctuations in the number of red giants. By comparing the spectra of pixels with different brightness, one can isolate the spectral features of red giants. Astronomers can then analyse these spectral features to derive galaxy properties to be checked against model predictions. 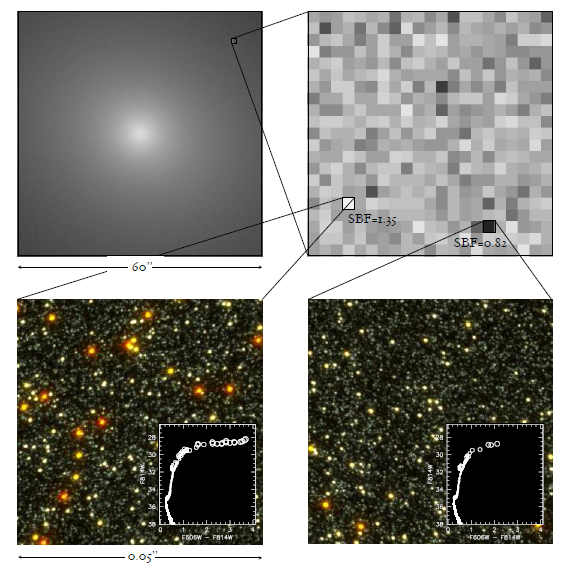 FIG. 1 – Top left figure shows a model elliptical galaxy based on observation of NGC 4472. The right figure zooms in on a tiny part of the galaxy, and shows the pixel-to-pixel brightness variations within that tiny region. Figures on the bottom panel further zoom in on a bright (white) and a faint (black) pixel. The bright pixel (bottom left) contains many more bright red giant stars, represented as red dots, compared to the faint pixel (bottom right). The inset figures are color versus magnitude diagrams of the stars in these pixels, where there are more luminous giant stars (open circles) in the bright pixel.

The last thing that the authors analysed are the effects of changing model parameters on the indices of index images, in particular by varying age, metallicity, and the IMF. They found that the indices are sensitive to age and metallicity, thereby enabling them to exclude models that produce incompatible ages and metallicities with observations. One interesting result is that the indices are also sensitive to the presence of late M giant stars, which allows one to constrain their contribution to the total light from a galaxy. This is useful because standard stellar population synthesis models for early-type galaxies do not include the presence of these cool giants.

In conclusion, the authors introduced fluctuation spectroscopy as a probe of stellar type distributions in old populations. They applied this method to NGC 4472 and found that results of observation agree very well with model predictions. Various perturbations are introduced into the model with the most important result being that one can quantify the contribution of late M giants to the integrated light of early-type galaxies. Before ending, the authors propose directions for future work, which include obtaining actual spectra rather than narrow-band images and studying larger ranges of surface brightness fluctuations. 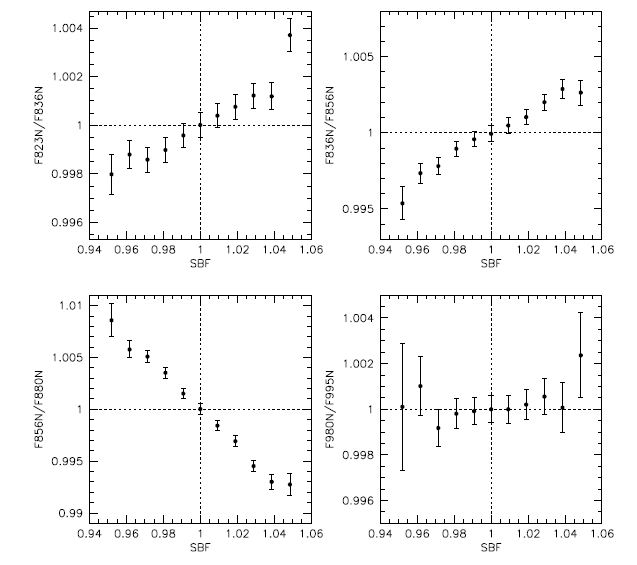 FIG. 2 – Vertical axis is the flux ratio in a narrow-band filter and the adjacent band. It is a measure of the different number of different stars present. The horizontal axis is surface brightness fluctuation, SBF. SBF = 1 is the mean, while SBF < 1 represents little fluctuation and SBF > 1 represents high fluctuation. There is a trend between index and SBF because red giants produce a larger-than-average brightness and a different spectrum that changes the index of different index images. 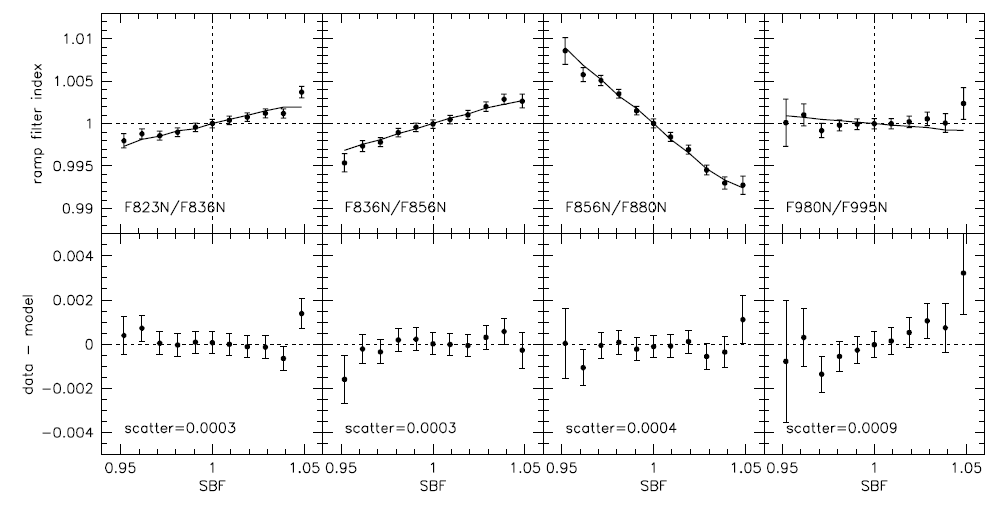 FIG. 3 – The top panel compares observed indices (dots) of NGC 4472 with model indices (lines). The vertical and horizontal axes are the same as Figure 2. The bottom panel shows the differences between observed and predicted indices. These figures suggest that model predictions agree amazingly well with observations.

The Mass Controversy of Retired A-Stars