Astronomers are constantly on the hunt for new and fascinating systems of celestial bodies. From compact objects in inspiraling dances to planets orbiting multiple stars like Tatooine, it seems that if a system can be dreamt up (and it obeys the laws of physics, of course) the universe will provide one.  Oftentimes, these exotic systems deliver new methods for accessing the physics of the astronomical objects involved. Recently, one such system was discovered: a binary of stellar remnants consisting of a millisecond pulsar and a pulsating white dwarf.

The Instable Lives of White Dwarves

White dwarfs (WDs) are the remnant cores of small stars held up from gravity by electron degeneracy pressure.  Though theoretically WDs can reach masses of about 1.5 solar masses, the smallest ones that have been discovered are an order of magnitude less massive and are aptly referred to as Extremely Low Mass White Dwarfs (ELM WDs).  Many WDs have been observed with clear signs of luminosity fluctuations caused by quakes inside of the star, and studying these fluctuations provides an avenue into the interior structure of these objects through asteroseismology. 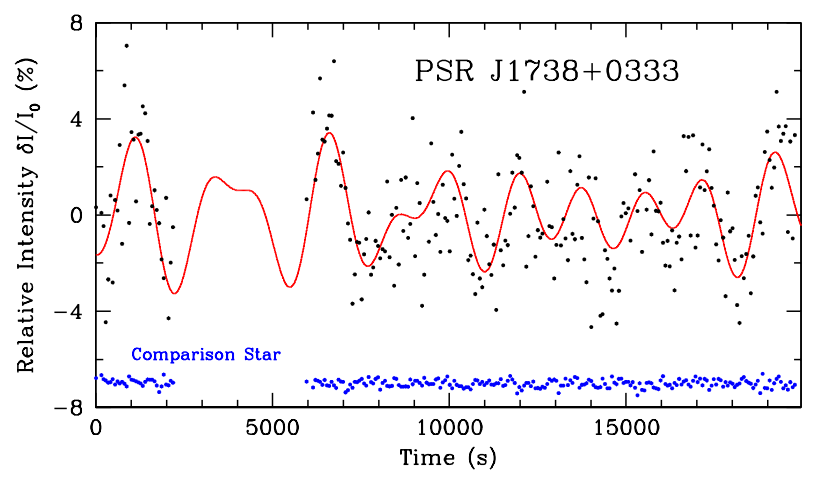 Figure 1. The light curve for the white dwarf companion of the millisecond pulsar PSR J1738+0333. The red line is the best-fit curve of the data, and measurements of a comparison star are offset and shown in blue. There was a period from ~2500-6000 seconds when the system was not being observed. [Fig. 2 in Kilic et. al 2014]

The first ELM WD that exhibited luminosity pulsations was only discovered in 2012, and since then much work has been done in attempt correlate the pulsations of these objects with their larger counterparts.  This study targeted two millisecond pulsars that were known to have ELM WD companions, hoping to catch pulsations in the ELM WDs.  Millisecond pulsars are rapidly rotating neutron stars (even denser stellar remnants than WDs) that have a strong magnetic field whose pole is misaligned from their spin axis.  As they spin, their magnetic pole points itself along with a strong beam of electromagnetic radiation towards Earth, like a precisely timed celestial lighthouse.  The predictability and accuracy of their pulses can provide excellent insight into the systems they are a part of. 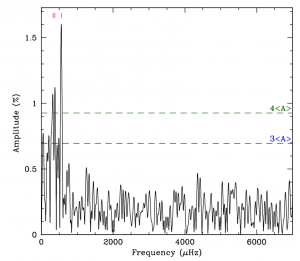 Figure 2. The Fourier transform for the light curve of PSR J1738+0333’s optical counterpart. The green and blue dotted lines mark the 4 and 3 confidence levels, respectively. The three significant pulsations are marked by red ticks at the top of the figure.  The peaks tell us the primary frequencies at which the luminosity pulsations are occurring.  [Fig. 2 in Kilic et. al 2014]

Interestingly, the progenitor of the ELM WDs likely caused the speed-up of these “recycled” pulsars to millisecond periods.  The extremely strong gravity of the neutron stars allowed them to steal matter from their neighboring star and accrete it, leaving behind the dense core.  By conservation of angular momentum, pulling in this extra matter causes the rotation speed of the neutron star to increase, similar to how ice skaters can increase their rotation speed by pulling their arms closer to their body.

Kilic et al. used the 8-meter Gemini South and North telescopes to get the light curves of the two millisecond pulsar-ELM WD systems. The light curves obtained showed no pulsations for one of their targets, but signs of brightness variability in the other (figure 1).  If the seemingly-random scatter of black dots and questionably best-fit line do not convince you of this, don’t fret! By looking at the data in the frequency-domain by use of a Fourier transformation, a clear peak in frequency can be seen with a period of ~1800 seconds with two other significant peaks at longer periods (figure 2).

Though optical variability of WDs can arise from a number of differing mechanisms (for example, irradiation from the neighboring pulsar can heat the WD atmosphere and cause brightness fluctuations), its mass and temperature indicate g-mode pulsations are the likely cause of variability.  G-modes are pulsations caused by gravity waves, not to be confused with gravitational waves from general relativity. 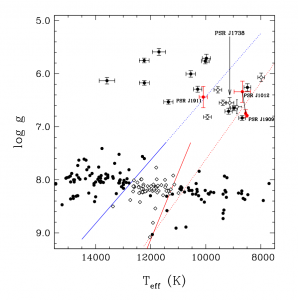 Figure 3. The instability strip for ZZ Ceti stars, shown in a surface gravity-temperature plot. Pulsating WDs are marked by open diamonds, and non-pulsating by filled circles. The companion to PSR J1738+0333 is labeled, along with the three other known ELM WD companions of pulsars. The solid blue and red mark the ZZ Ceti instability strip, and the dotted lines the hypothetical extrapolated extension of the instability strip for ELM WDs. [Fig. 3 in Kilic et. al 2014]

The ELM WD companion to PSR J1738-0333 is one of only a handful of pulsating ELM WDs known, and the only one with precise distance and radius measurements.  This makes it an archetype for modeling pulsations in helium-core WDs, and its pulsations make it another astrophysical clock in this richly timed system.  It also helps to extend what is known as the ZZ Ceti instability strip of WDs.  ZZ Ceti stars are a type of WD with hydrogen-dominated atmospheres that exhibit pulsations at certain masses and temperatures.  PSR J1738-0333’s companion sits in the middle of an extrapolated instability strip (figure 3), indicating that these recently discovered systems may follow similar trends to that of their hotter, more massive siblings.

Besides extending our knowledge of pulsating WDs, this unique system may let astronomers delve deeper into the interiors of compact stellar objects (figuratively, I hope). Optical counterparts to radio millisecond pulsars such as PSR J1738-0333 offer exceptional constraints on masses and thus equations of state of neutron stars. Physical parameters of the system, such as the cooling age of the white dwarf and spin-down age of the pulsar, may also be accessed and constrained by timing this system.  Future observations of this fruitful binary will hopefully lead to new knowledge of these exotic celestial objects.