Status: Accepted for publication in the Astrophysical Journal [open access on arXiv]

Millisecond pulsars (MSPs) — our favorite fast-spinning, ultra-dense cosmic laboratories — are well known as exotic compact objects that can be exploited as probes of general relativity and nuclear physics. Today’s astrobite explores a darker side of MSPs: their arachnid-like cannibalism.

MSPs are thought to be neutron stars that have attained their rapid rotation through angular momentum transfer from a binary companion. Once this period of mass accretion ends, MSPs are stable rotators (capable of more precise time keeping than atomic clocks). Before their eventual settling, however, a period of vicious cannibalism can reign. In systems with short orbital periods and relatively low-mass companions, the highly energetic MSP can ablate (in this analogy, “eat”) its binary companion. This destructive behavior, analogous to some arachnids’ sexual cannibalism, prompted the naming of two spider pulsar classifications: black widows, whose companions are lighter than 0.1 solar masses, and redbacks, with slightly heavier companion stars. Three of these redback pulsars have displayed unprecedented, relatively fast transitional behavior, demonstrating periods of both active accretion and relative quiescence. The ability to watch these changes in real time is an invaluable tool for understanding the lifecycle of MSPs.

Today’s featured article introduces another species of spider MSP: the huntsman. The new classification was fueled by the discovery of 1FGL J1417.7–4407, a Fermi gamma-ray MSP with a companion that was discovered at optical wavelengths. Like its redback cousins, the huntsman is a gamma-ray-emitting MSP in orbit with a (non-degenerate) stellar companion. This new spider, however, is in a wide binary orbit with a larger partner, and therefore does not display similarly predatory, ablating behavior.

While this may sound like a more boring class of binary MSP, J1417 (as it is called by the authors) is unique in what it might reveal about binary MSP evolution. Unlike redbacks and black widows, the huntsman J1417 may be the first-ever progenitor of what will become a normal MSP binary with a white dwarf companion and a long orbital period. As surprising as it may seem, a glimpse into the life of the most typical MSPs is one of the evolutionary links we’ve been most desperately lacking.

In the first studies of J1417, it was found that the system displayed double-peaked Hα emission lines. This usually indicates the presence of an accretion disk; however, the finding was surprising given that it occurred simultaneously with observations of the MSP at radio wavelengths. Because the emission was present even when J1417 could be seen as a radio MSP, it became clear that the system had not fully transitioned from one state to another. In order to untangle what was physically happening, the authors obtained new, multi-wavelength data from a number of telescopes, summarized here:

In the latter scenario, which is considered most probable by the authors, particles and radiation from the energetic pulsar interact with material from the companion star, creating hot regions capable of X-ray and Hα emission. The pulsar wind could force hot gas past the companion, pushing some of it away and causing spectra to be shifted from the companion’s motion by as much as 100 km/s, as the authors observe (meaning the emission is not atmospheric). The motion of the gas loosely echoing the companion’s motion (see Figure 1) provides a strong argument for this model of Hα emission. 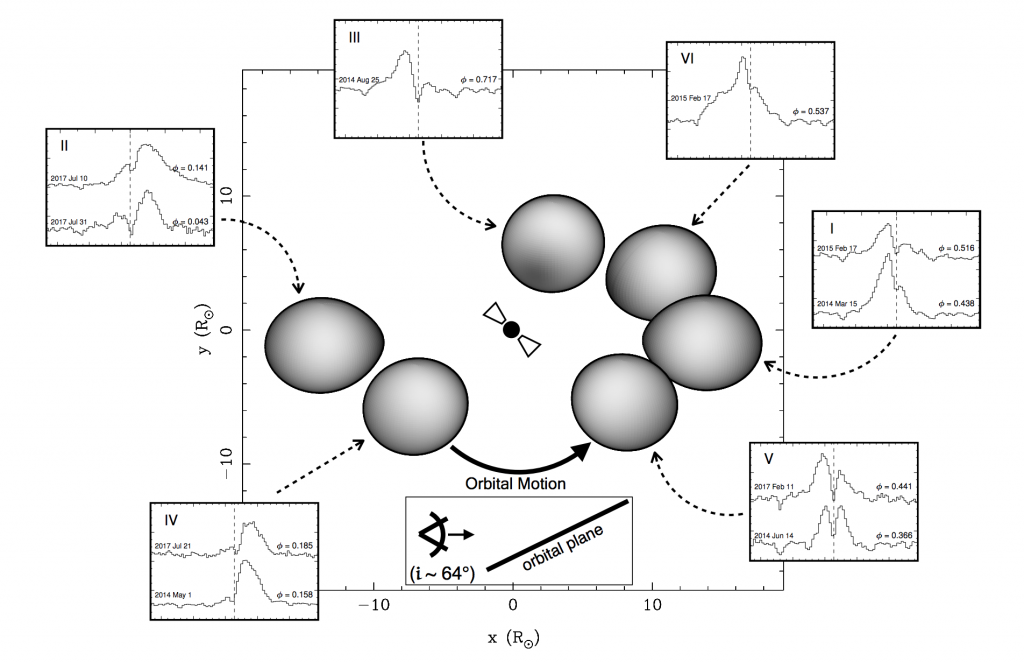 Figure 1: Observed changes in Hα spectral emission can be vaguely described by the proposed geometry and physical properties of the J1417 system. Generally speaking, the doppler shifting of the emission lines follows the companion’s motion in a way that strongly suggests the presence of gas being swept out of the system by the pulsar wind and an intrabinary shock. The spectra from six points along the binary orbit are presented, along with a geometrical representation of the binary during that time. Figure 7 in the paper.

A second system fitting the huntsman classification was recently described by the same team responsible for the J1417 report. Ideally, it will eventually be possible to obtain X-ray observations of the entire binary orbit to determine whether these systems indeed show significant periodic X-ray emission consistent with the proposed intrabinary shocks. While follow-up searches of unidentified Fermi gamma-ray sources in the radio have yielded many black widow and redback MSPs, it will be necessary to find more huntsmen in order to truly understand the evolution of more normal (and less cannibalistic) binary MSPs.