Classes we take in undergraduate astronomy tell us that stars in a globular cluster form at the same time from the collapse of a molecular cloud. The stars are located at the same distance and have similar chemical composition and age. The main difference between them is their luminosities due to mass differences (more massive stars are more luminous and vice versa). We call this type of star cluster “co-eval”, “single-generation”, or  a “simple” stellar population.

FIG 1. – An example star cluster with an extended main-sequence turn-off (eMSTO) on a color-magnitude diagram (CMD). The main-sequence (MS) is the black stripe and the MS turn-off is where the black stripe curves upward at (B-R) ~ 1 and R ~18 into the subgiant branch (region encompassing B-R ~ 1 to 1.3 and R ~ 17.5 to 16.5). Notice that the eMSTO results in a spread in the subgiant branch.The lines are isochrones at one age but with different metallicites and helium fractions, indicating the presence of multiple stellar populations. Image taken from here.

How can we tell if a star cluster is single- or multi-generation?  The most direct way is to look at its main-sequence turn-off on a color-magnitude diagram (CMD; or the observer’s Hertzsprung-Russell diagram). When stars are born, they are located on a stripe on the CMD where the stripe is defined by core hydogen fusion; this is the main-sequence (MS) and stars living on this stripe are called main-sequence stars. The MS turn-off is where MS stars exhaust their core hydrogen fuels (or die, in human-speak) and start to leave the MS to enter the “after life”, the subgiant branch and beyond. More luminous (hence, more massive) stars use up their core hydrogen fuel and leave the MS earlier than lower mass stars. When we look at the MS turn-off of globular cluster A and find that it is mostly populated by massive stars, we know that cluster A is younger than cluster B whose MS turn-off consists of lower mass stars. In other words, the age of a cluster equals the age of the stars located at the MS turn-off. A simple stellar population has a narrow MS turn-off, while a multiple-generation population has a much thicker MS turn-off. The thick MS turn-off is technically known as an extended MS turn-off (eMSTO). Figure 1 shows an example of an eMSTO. When one fits a curve on the CMD connecting all stars of the same age (known as a theoretical isochrone, where isochrone literally means “same time”) to a simple stellar population, one gets a single-aged curve. On the other hand, if the stellar population is made up of populations with different ages, isochrone-fitting gives multiple ages. Isochrones are generally fitted to MS turn-offs because that’s where we find most stars to lie.

Studies have found that eMSTO correlate with a cluster internal age spread of more than 300 Myr, which is puzzlingly large. This is because star clusters are thought to stop forming stars on timescales of ~ 10 Myr, due to young hot stars blowing away the clusters’ star-forming gas. The plot thickens….

The authors of this paper showed that globular clusters, particularly intermediate-age (~1-3 billion years) massive (≳ tens of thousands of solar mass) ones, despite their eMSTOs, might still be single-generation after all. The authors dug into archival Hubble Space Telescope (HST) data of NGC 1651, a two-billion-year-old and ~1.7×105 M☉ star cluster, and placed the cluster members on a color-magnitude diagram. What they found is rather surprising, illustrated in the figure below. Though they found an eMSTO, NGC 1651 also has a narrow subgiant branch, where one should really be expecting a broadened subgiant branch like that in figure 1 if the cluster’s stellar populations had significant age dispersion (deviation from a single isochrone line). 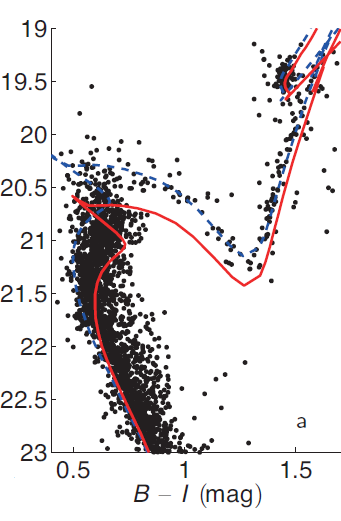 FIG 2. – Color-magnitude diagram of stars in NGC 1651, where the blue dashed and red lines represent isochrones of 1.738 Gyr and 2.188 Gyr respectively. The cluster is characterized by an extended main-sequence turn-off and a narrow subgiant branch (the downward horizontal slope).

The authors fitted theoretical isochrones to the two branches of the eMSTO and found the younger branch to be 1.7 Gyr-old (blue dashed line in figure 2) while the older one to be 2.2 Gyr-old (red line in figure 2) with an age dispersion of ~450 Myr. To first order, stars on the narrow subgiant branch are seen to be mostly confined to the younger isochrone at 1.7 Gyr. To quantify this, the authors plotted the number distributions of eMSTOs stars and subgiant stars versus age, as shown in figure 3, which clearly indicates that most subgiants are associated with the younger isochrone. In addition, if a stellar age of 1.8 Gyr is assumed, the authors found that they can reproduce 92% of the cluster’s subgiants. These invalidate genuine age dispersion within the cluster, despite its eMSTO. 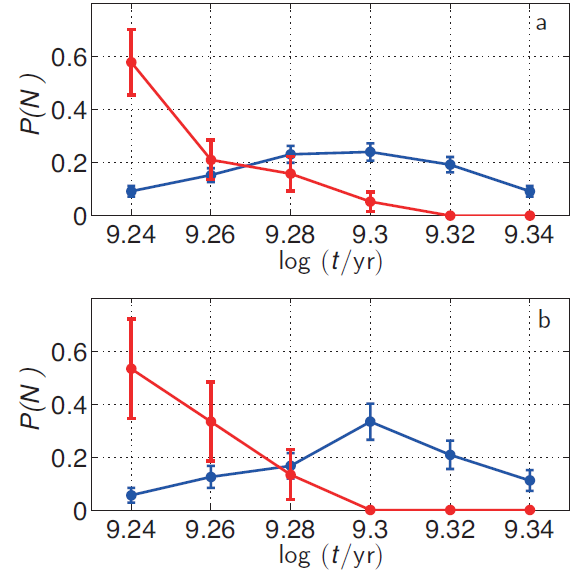 FIG 3. – Number density distribution, P(N), as a function of age of the cluster’s MS turn-off and subgiant-branch stars, with 1σ errors. The blue line is the eMSTO stars and red the subgiant stars. The top panel is the age distribution for all stars in the cluster while the bottom panel is for stars in the cluster core (≤ 2 pc) region only. Both panels show the highest number density of subgiants (red line) at log (t/yr) = 9.24 (equivalent to 1.7 Gyr), while eMSTO stars (blue line) are spread out more or less evenly at all ages.

How about additional evidence supporting NGC 1651 being a simple star cluster? The authors did not found a spread in the cluster’s chemical abundances that are consistent with the age spread from the eMSTO. In fact, several other papers, such as this one, have also noted the lack of chemical abundance spreads in eMSTO clusters. The authors of this paper also found similar morphology (ie, eMSTO but with very narrow subgiant branches) in their preliminary study of four other intermediate-age clusters, implying that NGC 1651 is not just a special case.

But if star clusters are single-generational, what causes their observed eMSTOs? One popular idea is population of stars that are rapidly rotating, where the spread in MS turn-offs is caused by the different lifetimes of rotating and non(-rapidly) rotating stars. However, the contribution to the subgiant-branch morphology from rapidly rotating stars is poorly understood, and others have found that the MS turn-offs still ended up being narrow rather than broad despite rotation. In other words, the most natural model that reproduces eMSTO is still an age dispersion.

Through this paper, the authors showed that an eMSTO in an intermediate age massive cluster may not necessarily imply an age spread from multi-generational stellar populations. They could just be simple after all. But this is not the end of the story, as we will definitely hear more about this curious phenomenon in upcoming papers.