As astronomers have discovered and cataloged hundreds of exoplanets over the last few years, the results have been surprising. Rather than familiar multi-planet systems like ours, with small inner planets and a few distant gas- and ice-giants, the exoplanet population seems to skew toward large planets orbiting very close to their stars—hot Jupiters and Super Earths closer to their suns than even Mercury is to ours. Some of this abundance is due to detection bias, but even if there are lots of undetected systems out there that look more like ours, hot, big planets are plentiful.

These alien systems are surprising not only because they’re so different, but also because they’re so hard to explain. Our basic understanding of planet formation matches our own solar system: in the farther reaches of the protoplanetary disc, dust and ice provide ample material for the formation of very big planets; closer in toward the star, the disc is warmer, so there’s no solid ice, leaving only rocky dust to form the small rocky planets we know.

Large planets orbiting close to their stars thwart this logic. Did they form farther out and later migrate in? Or are there circumstances in which a big planet with a big atmosphere can form close in to its star, in situ, where astronomers can see it today?

This is a big, complex question. Today’s paper looks at one aspect of it: atmospheres. Many Super-Earths orbiting very close to their stars—at less than 0.3 AU—seem to have, compared to Earth and other rocky inner-Solar System planets, very massive atmospheres. While Earth’s atmosphere is 0.00001% of its mass, these Super-Earths’ atmospheres can be 10% or more of the planet’s mass. These improbable atmospheres may help settle whether these planets could have formed where they’re now found.

These atmospheres are improbable because planet formation is limited by the material in a protoplanetary disc. If you turn up the density in a model protoplanetary disc, the inner regions become too unstable for planet formation right where many of these Super-Earths are found, within 0.1 AU from the star. So “more raw material” can’t be the answer.

The current thinking for forming Super-Earths in situ calls for multiple phases of planet formation. Accretion of material from the protoplanetary disc gets us from dust to pebbles to boulders to km-scale planetesimals, but then the giant impact phase might get us across the finish line. After a planetary core gets as big as it can from accretion, using up the local material in the disc, the remaining planetesimals crash into one another, colliding and accumulating on a very big scale (similar to how Earth’s moon is thought to have formed). Mass-wise, this can account for Super-Earths in disc regions without enough raw material to have formed these massive planets by accretion.

Super-Earth’s massive atmospheres, though, would have to be accumulated at least mostly during accretion, when the protoplanetary disc is still swirling full of gas. During the giant impact phase, there’s no new atmospheric material. More importantly, whatever atmosphere has been accreted is at risk.

The author’s of today’s paper ask, if these heavily atmosphered Super-Earths formed close-in to their stars, and managed to collect their big atmospheres during the initial accretion phase, could they keep those atmospheres through the violence of giant impacts?

Impacts between planetesimals can be between equal-sized bodies or a large body and a smaller impactor, but we’re still looking at a violent collision. The impact sends a shock wave through the two colliding bodies, resulting in movement on the surface akin to a global earthquake. If the velocity at the ground is high enough, compared to the local escape velocity, some or all of the atmosphere could be lost. 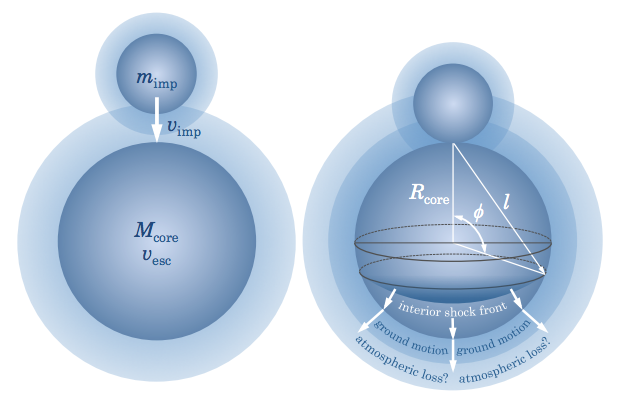 An impact imparts velocity to the whole surface of a body. The impact creates a shock front through the planetesimal’s core, which creates ground motion. At a high enough velocity, relative to escape velocity, this can set some or all of the atmosphere free.

And that’s just one collision. The author’s of today’s paper modeled two hypothetical impact histories: one in which a growing planetesimal was always hit by a body half an Earth mass, and one sequence in which a growing planetesimal always hit a body with its same mass. Neither of these is a likely literal scenario, but together they cover the main range of possibilities. 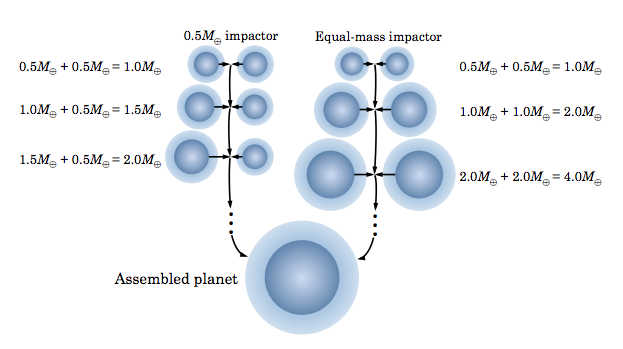 Two simplified paths to planet formation through giant impacts. On the left, the impactor is always at 0.5 Earth masses as the other planetesimal grows. On the right, the colliding bodies are of equal masses. Atmospheres not drawn to scale!

And together these paths toward planethood show that as the planetesimal’s mass grows, the atmosphere proportionally shrinks. Too much atmosphere is lost in collisions to allow Super-Earths to evolve with their atmospheres at their current positions. There’s a chance for a bit more atmosphere accretion after the giant impact phase, as the gas density in the disc is lower but not nonexistent. But the authors find that even that last round of accretion won’t bring these planets atmospheres into the range of atmospheric masses being observed.

The full story of planet formation is still very far from understood. Further observations bring new challenges and clarity to our understanding of these systems. Super-Earth migration isn’t easier to understand or explain than in situ formation. But today’s paper adds to the evidence migration may be how the story goes.