Title: The Morphology of the Sub-Giant Branch and the Red Clump Reveal No Sign of Age Spreads in Intermediate Age Clusters

Can star clusters be host to multiple events of star formation? Data from Hubble Space Telescope seems to suggest that this is the case.  While we often assume that all the stars in a stellar cluster have the same age, astronomers have recently found that a majority of intermediate age clusters in the Large and Small Magellanic Clouds display evidence of a spread in the age of their constituent stars. To see where this comes from, let’s take a step back to look at some properties of stars. 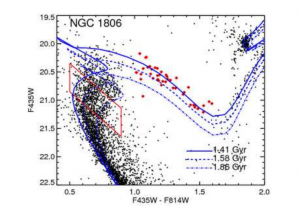 Figure 1 from the paper: a color-magnitude diagram of NGC 1806, showing the sub-giant stars (in red) clustering around the isochrone consistent with 1.41 Gyr. The narrowness of the sub-giant branch suggests that the stars do not have an age spread.

On the other hand, if a stellar cluster contains stars formed from several different star formation events, there would be a spread in the age of stars at the main sequence turnoff, known as an extended main sequence turnoff, or eMSTO. The presence of eMSTOs in many intermediate age clusters has caused astronomers to suggest that these clusters have been host to many star formation events. This problem was previously discussed in this astrobite, which focused on the star cluster NGC 1651.

However, when the authors of the previous astrobite paper investigated NGC 1651, they found that other features indicative of multiple generations of star formation–like a wide sub-giant branch–were not present. This led them to conclude that the extended main sequence turnoff might not be an indication of a spread in age after all. But is this true for other intermediate-age clusters?

The authors of today’s paper have looked at the intermediate-age stellar clusters NGC 1806 and NGC 1846, both located in the Large Magellanic Cloud, to see if they can find an age dispersion in other parts of the color-magnitude diagram. In particular, they focus on the width of the sub-giant branch and the red clump. These clusters are estimated to have age spreads of about 200-600 Myr largely based on their MSTO regions.

They began by making color-magnitude diagrams of the stars in both clusters. The one for NGC 1806 is shown in Figure 1. The blue lines running through the diagram are isochrones, curves that represent the location of stars with the same age. The sub-giant branch stars, in red, are clustered around one isochrone, which seem to indicate that there isn’t a spread in their ages. 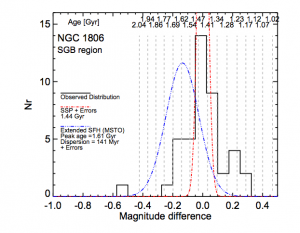 Figure 2: Figure 3 from the paper. The black histogram indicates the magnitude difference between the observed sub-giant stars and the synthetic sub-giant stars in their 1.44 Gyr isochrone model. The red distribution shows the expected distribution for their simple stellar population model convolved with the observational errors. As we can see, this doesn’t explain the tail ends of the black histogram. On the other hand, the blue distribution, which is the synthetic stellar population model with an age spread that best fits the MSTO region, misses the core of the black histogram.

The authors then created two synthetic color-magnitude diagrams, one showing the distribution if the eMSTO was caused by an age dispersion, and the other for a simple stellar population with an age of 1.44 Gyr (their best fit to the sub-giant branch). To find the difference between their observations and simulations, they subtracted the expected difference in magnitude for stars in the observed sub-giant branch 1.44 Gyr isochrone. This is shown as the black histogram in Figure 2. After estimating the observational errors, they convolve these with a distribution of stars coming from a simple stellar population (in red). Finally, these are compared with the distribution expected from stars that formed over an extended star formation history (in blue). The 1.44 Gyr isochrone is able to reproduce the peak of the histogram, but fails to catch the tail ends, something the authors acknowledge is therefore unlikely to be caused by errors in our photometry (our measurement of the flux). On the other hand, the model that used a stellar population with an age spread fails to account for the peak of the histogram, suggesting an inconsistency between the sub-giant branch and a large age spread. When they analyze the red clump, they also find the stars are clustered around one isochrone.

The authors repeat their analysis for NGC 1846 and obtain similar results for the other cluster, causing them to conclude that eMSTOs are not caused by an age spread.

Their results are consistent with the assumption that stellar clusters do not exhibit a range of stellar age and are also consistent with a number of findings in the literature that support a lack of age spreads in stellar clusters. Instead the authors point towards stellar rotation or interacting binaries as two possible causes of the eMSTOs. Stellar rotation can change the structure of the star and its inclination angle to an observer, causing it to have a different effective temperature and therefore, color. However, we still don’t fully understand the effects of rotation on the sub-giant branch of the color-magnitude diagram, so it is still possible that this explanation, while consistent with the eMSTO region, could be at conflict with other parts of the color-magnitude diagram. Another possible explanation they offer is the presence of unresolved binaries; if we have unresolved binary stars, then we would be recording the flux of two stars rather than just one. These binaries are not expected to cause significant broadening in either the sub-giant branch or the red clump, but also may not fully explain the eMSTO. The authors also acknowledge and encourage alternative explanations for the eMSTOs as well.

Despite the growing evidence for an alternative explanation to age spreads being the cause of the eMSTOs we observe, it’s probably too soon for us to conclude definitively either way in this debate. At the very least, these results indicate that we still need to to study eMSTOs and their possible causes in greater detail.