Title: The Closest Flyby of a Star to the Solar System

A history of nemeses 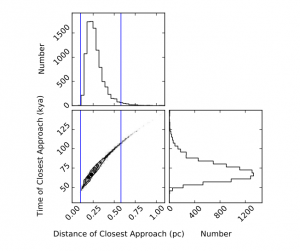 Figure 1 from the paper showing the distributions of the times of closest approach and the distances of closest approach from the orbits calculated by integrating the motion of W0720 and the Sun in a Galactic gravitational potential. The blue line on the right shows the maximum semi-major axis for retrograde orbiting Oort Cloud comets (0.58 pc) while the line on the left indicates the edge of the dynamically-active inner edge of the Oort Cloud (0.10 pc).

The idea that catastrophic events on Earth could have been caused by other stars has been around since at least the 1980s, when two paleontologists at the University of Chicago, David Raup and Jack Sepkoski, noticed an apparent periodicity of 26 million years in Earth’s last ten major extinction events. Soon after, two papers (both published in the same issue of Nature) independently proposed that these mass extinctions could have been caused by an as-yet-unseeen binary companion to the Sun. This hypothetical star has since gained fame as “Nemesis” or the “Death Star.”

Unfortunately, our theorized stellar nemesis has never been detected, and a binary companion seems ever more unlikely to be the cause of a possible periodicity in Earth’s mass extinctions. Nevertheless, this hasn’t stopped astronomers from looking for other possible close encounters of the stellar kind. While we don’t necessarily expect periodic mass extinctions on Earth to be the result of a mysterious binary companion, it seems possible–even likely–that nearby stars could occasionally pass close enough by to perturb the Oort Cloud and send a shower of comets our way, some of which could contribute to extinctions on Earth.

The authors of today’s paper claim to have found the star with the closest known flyby to the solar system, WISE J072003.20-084651.2 (W0720), or “Scholz’s star”. Its trajectory is thought to have taken it to a staggeringly small (at least by astronomical scales) distance from the Sun of about 0.25 parsecs, or 52,000 AU (an AU is the name we give the distance between the Earth and the Sun). This would put W0720 just inside the outer Oort Cloud at its closest. For comparison, the closest known star to us, Proxima Centauri, is located a comfortable 1.3 parsecs away. Previous astrobites have also discussed possible effects of stellar flybys on the eccentricity of exoplanet orbits and the size of a star’s protoplanetary disk.

The authors became intrigued with W0720 when they noticed its unusual combination of low tangential velocity and proximity. Since objects that are closer to us tend to look like they’re moving faster, the fact that this star was both close and slowly-moving across the sky was a good indication that much of its velocity was radial–something that recent papers have confirmed. In that case, they were interested to see if it had or would eventually come close to the Sun and, if so, what effects it may have had on the number of comets that we see.

To study the star’s–which was recently discovered to actually be a binary–trajectory, they integrated the orbit of W0720 and the Sun with a Galactic gravitational potential and used the velocity data of the star to model orbits of the star around the Sun. They simulated the orbit of W0720 and the Sun ten thousand times, which allowed them to sample the space spanned by the uncertainties in their measurements (obtained from observations and the literature). From the resulting distribution of closest-pass distances, they found that W0720 would have come within 0.252 pc of the Sun about 70,000 years ago. To check their results, they also calculated these numbers using a simple linear trajectory (which ignores the gravitational potential of the Galaxy) and found that their numbers agreed to within 2.5%–unsurprising, given how recently W0720 passed by. Figure 1 from the paper shows the distribution of both the distance and time of closest approach using the more accurate integrated approach.

The authors also noticed that the nearest pass of W0720 actually corresponds with the location of the aphelia of some comets from the Oort Cloud. At first glance, this might see to indicate a connection between W0720’s visit and the comets, but Mamajek et al disregard this as a possibility since the orbital period of such comets would be on the order of 2 million years–meaning that they can’t have reached us yet. They also note that only the closest passes of W0720 in their simulations (a distance of 0.087 pc) actually brought it within the inner Oort Cloud. Furthermore, when they calculate the encounter-induced flux of comets from W0720, they find that it isn’t enough to be noticeable compared to the amount that would be generated by tidal effects of our Galaxy. This causes them to conclude that while W0720’s trajectory took it close by the Sun quite recently, it had a negligible effect on the amount of comets that we would see 2 million years from now.

One last point remains, however, and that is the question of whether W0720 is really the star with the closest approach. A paper by C.A.L. Bailer-Jones published just last December named a different star, HIP 85605, as the closest approach to the Sun. Bailer-Jones estimated that HIP 85605 has a 90% chance of coming between 0.04 and 0.20 pc of the Sun, which puts it closer than W0720, and the authors address this point in the final section of their paper.

The measurements of HIP 85605 were based on data from the satellite Hipparcos, which obtained parallax measurements of many nearby stars. However, as acknowledged in the earlier paper, it was possible that the astrometry for HIP 85605 was incorrect, which would make the star appear to be much closer than it actually is.  Mamajek et al investigate this by looking at HIP 85605’s color. A star’s color and spectrum can indicate what kind of star it is, and therefore how bright it should be. When they studied HIP 85605, they found that it had the color and spectrum of a K star, but that the distance obtained from Hipparcos’ parallax measurement would give it the luminosity of an M star (which is much dimmer). They resolve this discrepancy by suggesting that the Hipparcos parallax measurement is incorrect. This in turn puts HIP 85605 farther away than previously believed and gives it a different velocity than was calculated in Bailer-Jones’ paper. As a result, W0720 would beat out HIP 85605 to be the star with the closest approach.

For now at least, it seems like W0720 will remain the closest known flyby from the Sun. Even so, the authors point out parallax data from the newer Gaia instrument may very well allow us to detect other candidates (close by and with small tangential motion) for the our nearest stellar encounter. And so we await possibly more exciting discoveries in the future…