While numerous cosmological models have been proposed to describe the early history and evolution of the Universe, the Big Bang model is by far in the best agreement with current observations. Different cosmological models predict different behaviors for the temperature evolution of the cosmic microwave background over time, and the Big Bang model predicts that the CMB should cool adiabatically via expansion (i.e. without any the addition or removal of any heat). We can describe the “overall” temperature of the Universe by measuring the blackbody spectrum of the cosmic microwave background, as it is believed that the early Universe was in thermal equlibrium (i.e. same temperature) as these CMB photons. By measuring the CMB temperature evolution over a range of redshifts (or equivalently, over cosmic history), we can test the consistency of the prevailing Big Bang model and search for any deviations from adiabatic expansion that might suggest new additions to our model.

In this paper, the authors combine CMB data from the Planck mission and previously collected X-ray observations of galaxy clusters to obtain constraints on this adiabatic temperature change. Instead of measuring the CMB directly, the authors make use of the thermal Sunyaev-Zeldovich (tSZ) effect. This effect causes high energy electrons from the intracluster gas contained within a galaxy cluster to boost the energy of CMB photons through electron-photon scattering. The authors use Planck data to subtract the background CMB signal from the X-ray emission of the galaxy clusters to measure the boost in CMB photon energy induced by these clusters. These galaxy clusters have known redshifts, and this redshift data combined with CMB temperature measurements yield the history of CMB temperature changes over time. 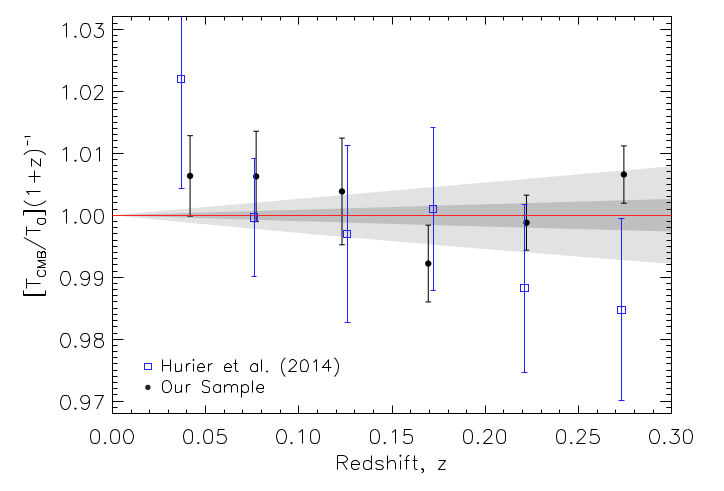 Fig. 1: CMB temperature (normalized with respect to redshift and present-day CMB temperature) plotted against redshift. The blue square points and shaded regions correspond to the measurements performed in this paper, which are in good agreement with the horizontal red line representing adiabatic cooling. The black dots are previous measurements done by a previous study.

While this agreement is perhaps not too surprising given the spectacularly good predictions made by the Big Bang model, this kind of consistency check is important for maintaining our confidence in the Big Bang model and ruling out other potential cosmologies. For further validation, the authors plan to continue this analysis by expanding their sample of galaxy clusters to higher redshifts for additional consistency checks.