Of the more than 1500 exoplanets discovered over the past two decades, perhaps the most intriguing and unexpected have been the ultra-short period planets, worlds so close to their parent star that they complete an entire orbit in less than a day. Most are small, less than twice the radius of the Earth, and are so hot that their rocky crusts are being melted away. The material melting off the surface forms a cloud of debris, which could be used to investigate the composition of these mysterious worlds. Unfortunately,  most of them are too small for our current instruments to observe in detail.

One planet that is within reach is 55 Cancri e. Roughly twice the radius of the Earth, it orbits in just 18 hours, so close to its star that the surface temperature is roughly 2400K. Its host is the brightest star currently known to have transiting exoplanets, making 55 Cancri e an ideal target for further study. Previous observations have been able to measure its mass and radius more precisely than any other rocky exoplanet. 55 Cancri e was found to be much less dense than the Earth, suggesting that it might be enveloped in a layer of super-heated water, or even be partly made of diamond. The authors of this paper have added a new phenomenon to this intriguing world: Signs of possible volcanism.

Using the Spitzer space telescope, the authors observed the system for a total of 85 hours between 2011 and 2013. Spitzer is an infrared telescope, allowing it to see the wavelengths around 4.5μm where the reflected light from 55 Cancri e is strongest. Over the course of their campaign they were able to observe six transits of the planet across its star, as well as eight “occultations”, where 55 Cancri e passed behind the star.

The authors first studied the transits of the exoplanet across its host star, where the amount of light blocked shows how large the planet is relative to the star. Taking their six transits together , the authors found that the radius of 55 Cancri e is around 1.92 times that of the Earth. Previous studies had returned a larger radius, at 2.17 Earth radii. The new, smaller radius means that 55 Cancri e is denser than previously thought, and no longer needs the exotic chemical compositions suggested by the earlier results.

Along with the new radius, the transit depths also appeared to be varying slightly, although not by enough to be considered significant on their own. The occultations were a different story altogether. 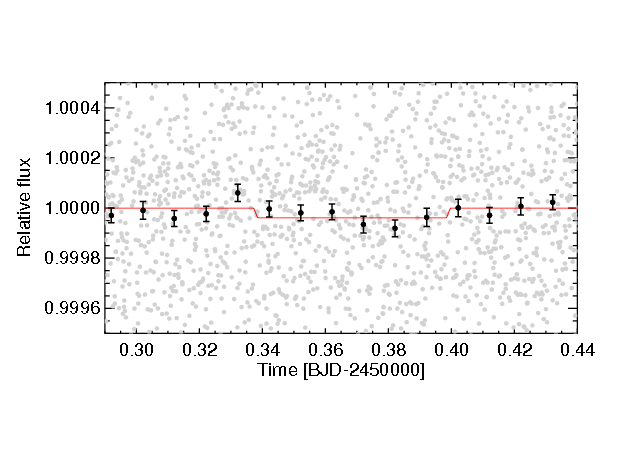 Combined light curve of the occultations of 55 Cancri e in 2012. The amount of light blocked suggests that 55 Cancri e had a temperature of around 1427K in 2012… 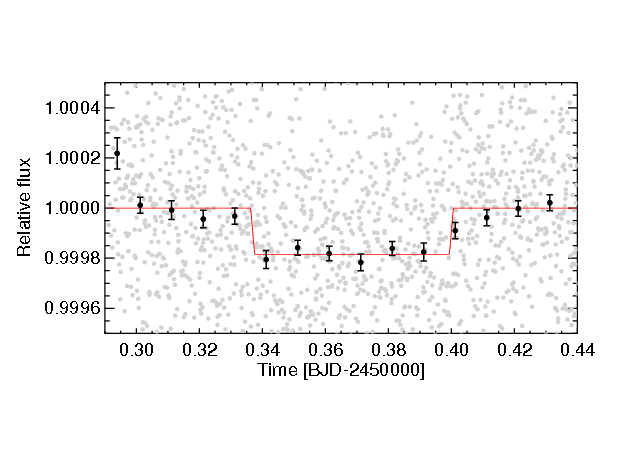 What could have caused such a massive change? It wasn’t the star: 55 Cancri has been watched almost continuously by ground-based telescopes for eleven years, and shows no variations larger than a Sun-like sunspot cycle. Something had to have happened to the planet itself to cause such a large brightness change.

The high surface temperature of 55 Cancri e suggested an explanation to the authors. With temperatures of over 1000K, most if not all of the crust would be molten rock. This could result in massive, widespread volcanism, similar to that seen on Jupiter’s moon Io.

On 55 Cancri e, the authors suggest that a massive plume of material from a volcano could raise the photosphere up through the atmosphere. This would mean that, in the 2012 occultations, we are seeing the light from the plume in the upper, cooler parts of 55 Cancri e’s atmosphere. As the plume dissipated the light could shine through from the deeper, hotter parts of the atmosphere, resulting in the much deeper occultation in 2013.

A volcanic plume could also explain the slight changes in transit depth, as the plume would change the thickness of 55 Cancri e’s atmosphere, blocking more light from the star as the planet passed in front of it. The authors calculate that this would require a plume somewhat larger than any observed in the Solar System, but this would not be surprising given the extreme nature of the system.

The authors finish by noting that the presence of volcanism on 55 Cancri e raises a tantalizing opportunity. If the planet is repeatedly covered with material blasted out from its interior, then spectroscopy by the Hubble or James Webb Space Telescopes could be used to probe one of the most elusive properties of extrasolar planets: Their chemical composition.  As both one of the most extreme and most easily studied exoplanets,  future observations of 55 Cancri e will probably bring many more surprises.