A Problem in the Dark Realm

Dark matter is that mysterious substance that makes up 27 % of the Universe, compared to visible matter (ie, baryons) that only takes up 5 %. We now know that dark matter lives in the densest structures: galaxies and clusters of galaxies (see this astrobite for example). In other words, galaxies are embedded within dark matter halos. This fact comes to light when we measure the rotational curve of galaxies. Instead of petering off at large radii, which is the case if the only matter is visible matter, the rotational velocities of galaxies keep increasing — a sign that something invisible is at work. This invisible matter is precisely dark matter. The rotational velocity of a galaxy is not only affected by its starry and gaseous content, but also by the dark matter that surrounds it.

In the effort to unravel the identity of dark matter, astronomers stumble across one tricky problem, known as the cusp-core problem. The canonical model, known as ΛCDM (Lambda Cold Dark Matter), predicts a steep and cuspy density profile for the dark matter halo as one progresses inward to the halo center. Cuspy profile means that most dark matter are concentrated in the inner regions. This is a well-known result from various numerical simulations based on ΛCDM cosmology. The cuspy dark matter halo density profile is coined the NFW profile (Navarro et al 1996b). However, observations of the rotational curves of dwarf galaxies suggest otherwise — that dark matter halos instead have flat “cores” in their centers. In this case, dark matter concentration “flattens out” inward. Dwarf galaxies are favorite hunting grounds for dark matter astronomers as 99% of their masses come from dark matter alone. Figure 1 shows cuspy dark matter density profiles versus dark matter with “cores”. The cusp-core problem is an ongoing tension and presents a challenge to the standard ΛCDM paradigm. 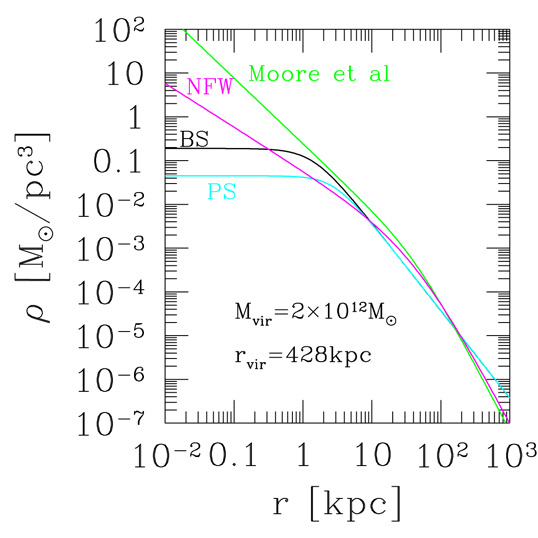 Alternative dark matter models such as warm dark matter (WDM) and self-interating dark matter (SIDM) are introduced to resolve the cusp-core problem. However, ΛCDM cosmology may still give rise to cored halos, by utilizing astrophysical processes that “push against” dark matter halos such that they are no longer steep and cuspy in the centers. One such process is outflow from star forming activities such as supernovae. Whether the cusp-core problem points to a new cosmological model (ie, new dark matter flavors) or is instead a result of astrophysical processes within the ΛCDM framework is an interesting question, one we will daringly undertake today.

The authors of today’s paper investigated how supernovae feedback modifies the density profile of DM halos by adopting a mass-dependent DM halo density profile, the DC14 model. In this model, supernovae outflows drive the expansion of DM halos, flattening out their cusps to form cores. The efficiency of DM core formation depends on the balance between the supernovae energy and the gravitational potential energy of the galaxy. While low mass galaxies (Mstar < 106 Msun) will be able to retain their NFW dark matter cusps, intermediate- to high-mass galaxies (3 x 106<~ Mstar <~ 1010 Msun) can form cores.

The authors provide several clues we can look out for when determining if DM cores actually originate from supernovae feedback, and whether the cores obey the DC14 model. The places to look for these clues are hidden in galaxy populations, specifically in the velocity profiles and Vrot-Mstar relations of galaxies. Figure 2 (left panel) shows the results of their DC14 model as compared with the standard NFW model, looking at the number of galaxies as a function of circular velocity in the line of sight (LOS) Vlos, also known as the velocity function. The cuspy NFW density profile overpredicts the number of galaxies with Vlos less than ~60 km/s; on the other hand, the DC14 model is consistent with observations. The slight upturn of the velocity function at low Vlos is a phenomenon seen in models where cores are formed by baryonic outflows, and the DC14 model clearly displays this trend. One strike against the NFW profile.

The next important result that the authors present is how their model compares with the standard cuspy DM halo profile when you look at the relation between Vlos and Mstar, also known as the Tully-Fisher relation. The Tully-Fisher relation is an empirical result which, in normal day-to-day astronomy, is used to estimate distances to spiral galaxies. In the realm of dark matter, the relation implies a correlation between visible matter and dark matter halos. Figure 2 (right panel) shows how well the DC14 and NFW profiles fare in reproducing the observed Tully-Fisher relation. In the lower Mstar mass ranges, the NFW profile predicts these galaxies to have larger Vlos than observed, while the DC14 density profile adheres closely to the observed Vlos over the whole stellar mass range.

Fig 2 – The left panel shows the velocity function, which is the number distribution of galaxies as a function of line of sight rotational velocity, Vlos. Ignoring the dark purple line which indicates maximum circular velocity for Cold Dark Matter (CDM), the DC14 model in red is contested against the NFW profile in light purple. The right figure relates Vlos with galaxy stellar mass M*, ie the Tully-Fisher relation. The data points are observational results. In both plots, the DC14 model closely tracks observations while the NFW profile deviates far from observations. Figure 2 from paper.

Other Heros to Save the Day?

Hopefully by this point we’ve established the shortcomings and strengths of the NFW and DC14 profiles respectively. But what about alternative dark matter models like warm dark matter (WDM) and self-interacting dark matter (SIDM)? As we briefly touched in the beginning, they are partly conceived to resolve the cusp-core problem. In fact, WDM and SIDM are also mass-dependent like the DC14 model, but not in exactly the same way. So, how do they fare in predicting the velocity function and the Tully-Fisher relation for galaxies? Figure 3, our last figure of the day, shows exactly this. Despite doing better than the NFW profile, both WDM and SIDM are not able to fit the velocity function and Tully-Fisher relation as well as we expect. 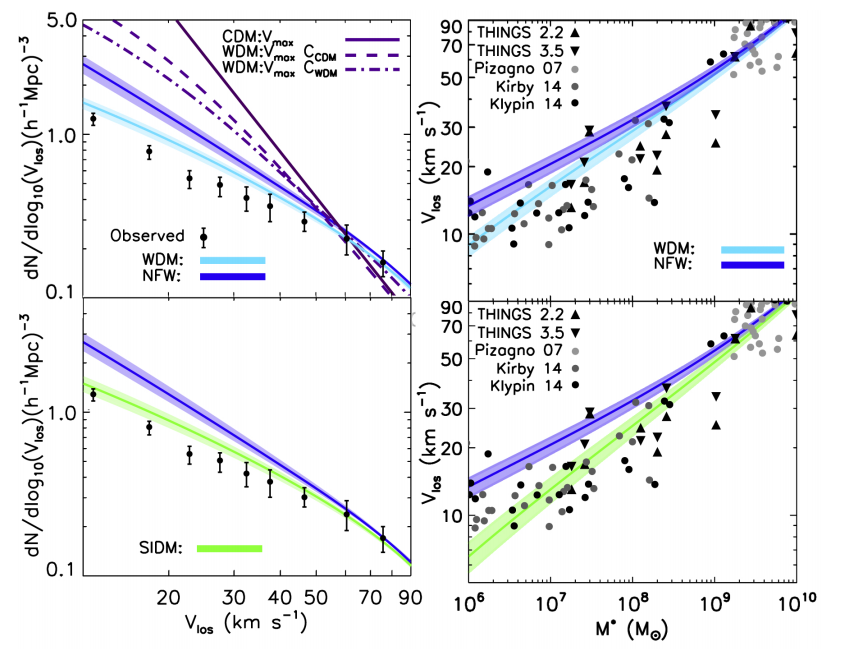 By adopting an astrophysical mass-dependent DM halo density profile and looking at galaxies velocity function and the Tully-Fisher relation, the authors highlighted how we can distinguish if DM cores form via astrophysical process or is a consequence of alternative dark matter models. Comparisons of their model with the NFW profile and alternative dark matters seem to suggest their model has the upper hand. While the standard NFW profile is in more peril, the parametrization of WDM and SIDM might also need some tuning. In any case, the model in this paper is an interesting card to consider in the pool of choices laid out on the dark matter table.

Where did the Milky Way Dwarfs come from?