Life, the Universe and … Amino Acids!

In Nature’s Starships Vol. I we learned that amino acids, the fundamental building blocks of DNA, might have formed in the interiors of planetesimals, asteroid-sized rocks in the early solar system that will later grow to form planets. Why would that matter to us? Because, according to the ‘late veneer’ hypothesis, all of Earth’s surface water (and possibly organics) was added by impactors long after the formation of the bulk Earth – in other words our planet was polluted by miniature versions of itself, harbouring the essential ingredients for life’s boiling pot!
The authors of Nature’s Starships I found an increased abundance of amino acids only in a very specific subclass of the most primitive meteorites and interpreted this as evidence for specific layers within planetesimals, where temperature and pressure are optimal for the needed chemical reactions to happen.

A Deep Thought about … chemistry! (again)

To test this hypothesis Cobb et al. ran computer models of amino acid synthesis with temperature and pressure conditions they expect in planetesimals. Figure 1 shows the surprising results of these considerations.

Therefore, it seems that the layer where the amino acids formed is not crucially important for its yield. As explained in Nature’s Starships I the reaction rate of amino acids seems to be related to water in a way – in meteorites which are associated with very dry (or heated) environments a lot less amino acids have been found than for meteorites associated with watery environments. Thus, it seems that we need more water to achieve an increase in reaction potential and to change the picture above.

So Long, and Thanks for All the … Water! 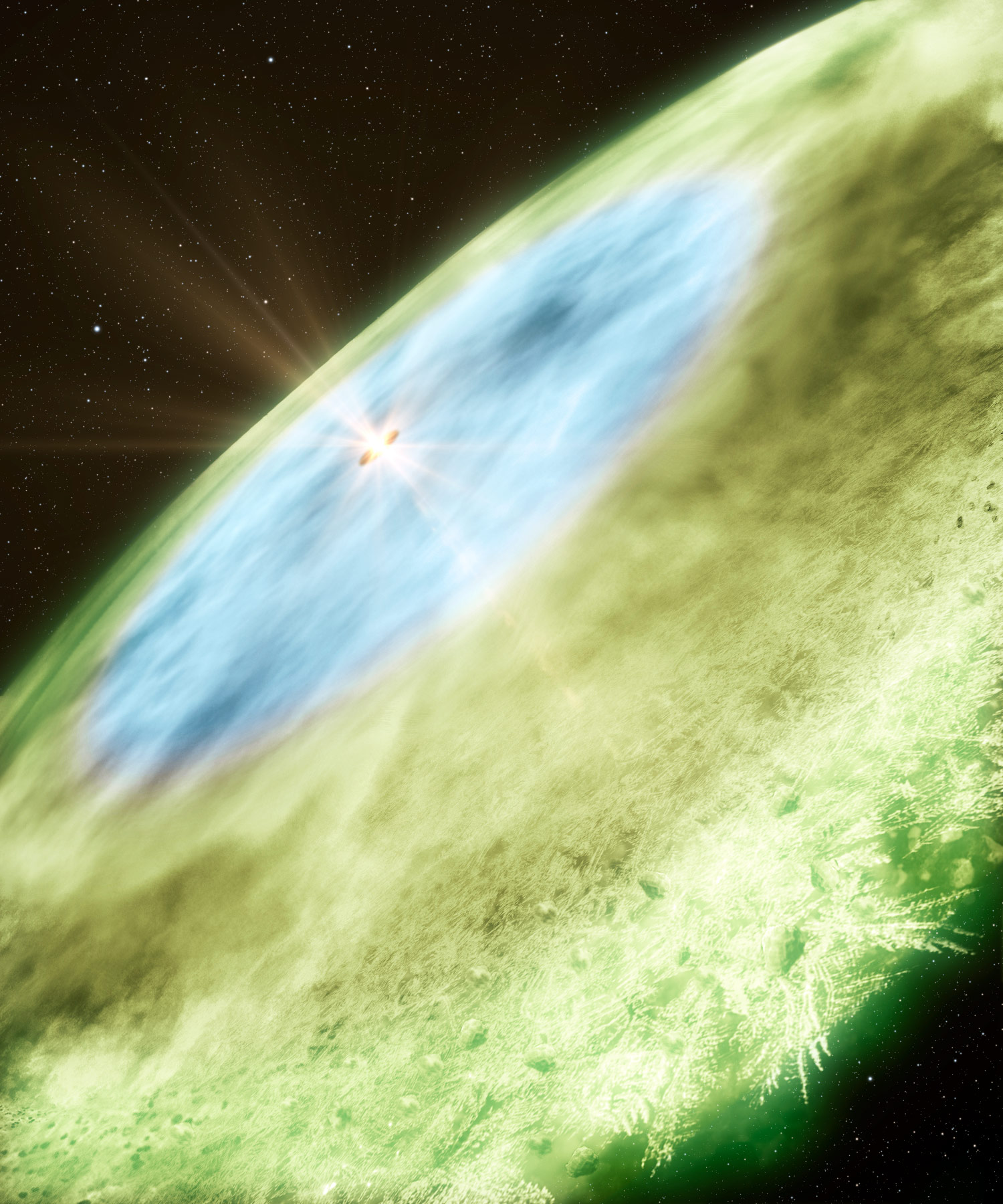 Artist concept of an ice line transition within a protoplanetary disk. In this case for the TW Hydrae system. Credit: Bill Saxton and Alexandra Angelich, NRAO/AUI/NSF

From planet formation models it is fairly well known that during the early era of the solar system the water snow line, the distance to the sun at which water is present as ice because of less sunlight, was located at roughly to 2-2.5 astronomical units (~ nowaday’s asteroid belt). This means planetesimals which were present around this location during the planet formation epoch featured huge gradients in water abundance – planetesimals within the snow line had less liquid water than their outer companions. This transition in the chemical state is artistically shown in Figure 2.

This is very peculiar, since most meteorites that fell on Earth are thought to originate from the asteroid belt, where the snow line used to be. Therefore, instead of scaling the total amino acid yield with different temperatures, the author’s try to vary the total water content within the planetesimals, which is shown in Figure 2.

Fig. 2: The total abundance of amino acids in parts per billion according to the model of Cobb et al. (black line). The colored areas correspond to the spread in data in available meteorites and the dots represent single measurements of specific amino acid abundances within the most important samples for this study. The left plot shows the data points unaccounted for weathering effects (when meteorites lie on the surface for a long time, they incorporate water in their bulk material, which was not present in space). Therefore, the right hand side tries to account for that backdraw.  Source: Cobb et al. (2015)

So, when including the effects of weathering on the surface, it seems that expectations of amino acid abundances are consistent with our observations and fit well with the idea that water content seems to be the dominant factor for amino acid production. As often in nowaday’s literature, this finding underlines the deep connections of different fields and the need for interdisciplinary studies, in this case to achieve a better understanding of a possible formation pathway of organic molecules. What do we get from this study with regards to astrobiology? The formation of amino acids within planetesimals is not an isolated process. You can’t look at a planetesimal decoupled from its surrounding, instead the physical and chemical properties are directly inherited from the astrochemistry of the protoplanetary disk.