Giant planets from far out there

Planets are ubiquitous. Therefore, building them must be straightforward, right? The standard, and for the most part, accepted idea sounds roughly like this:

Each of the above bullet points is a story of its own, of which the authors of today’s paper tackle the time scale problems of point 4 . If all the material of the protoplanetary disk is stored relatively equally in planetesimals it is really hard to form gaseous planets, because usually all gas vanished before the planets grow big enough to accrete it onto their cores! Moreover, observations show that young stars are usually hosts of protoplanetary disks on the time scale of a few million years (half-life ~ 2.5 million years). When modelers now assume the minimum disk mass from the early solar system (the MMSN – Minimum Mass Solar Nebula) and try to form planet from the collisions between planetesimals, the disk has to have a much longer lifetime to reach masses high enough for the onset of runaway gas accretion, which is necessary for giant planets to accrete enough gas before it has vanished. This would mean no giant planets could form, which is obviously not the case.

Pebble accretion to the rescue

Bitsch et al. replace the planetesimal phase in the story above with pebble accretion. In the version used by the authors, instead of turning all solids in the disk into planetesimals, lots and lots of smaller rocks (‘pebbles’) form by collisions or sublimation/condensation processes until they are roughly mm-sized. At some places the solids collapse and form rocky cores with sizes from 100-1000 km. These cores then accrete many of the pebbles and eventually form planets. The central point is that under specific circumstances the growth via pebble accretion can be much faster than via collisions among planetesimals and therefore potentially solves the time scale issue from above.

Further, as you look deeper into the physics of the evolution of the protoplanetary disk and the population of planets observed, the physics turns out to be very complicated, which has to be reflected in the simulations. Therefore, the authors introduce models of the migration of the planets in the disk (determining whether they end up close to the star or far away), and the change in temperature and density and therefore solid contents of the disk in time. The migration of planets is a subject of its own, crucially important for the explanation of ‘Hot Jupiters’ (massive giant planet in close-in orbits around their host star). Figure 1 shows the final outcome of a model where solid contents in the disk are 1%. 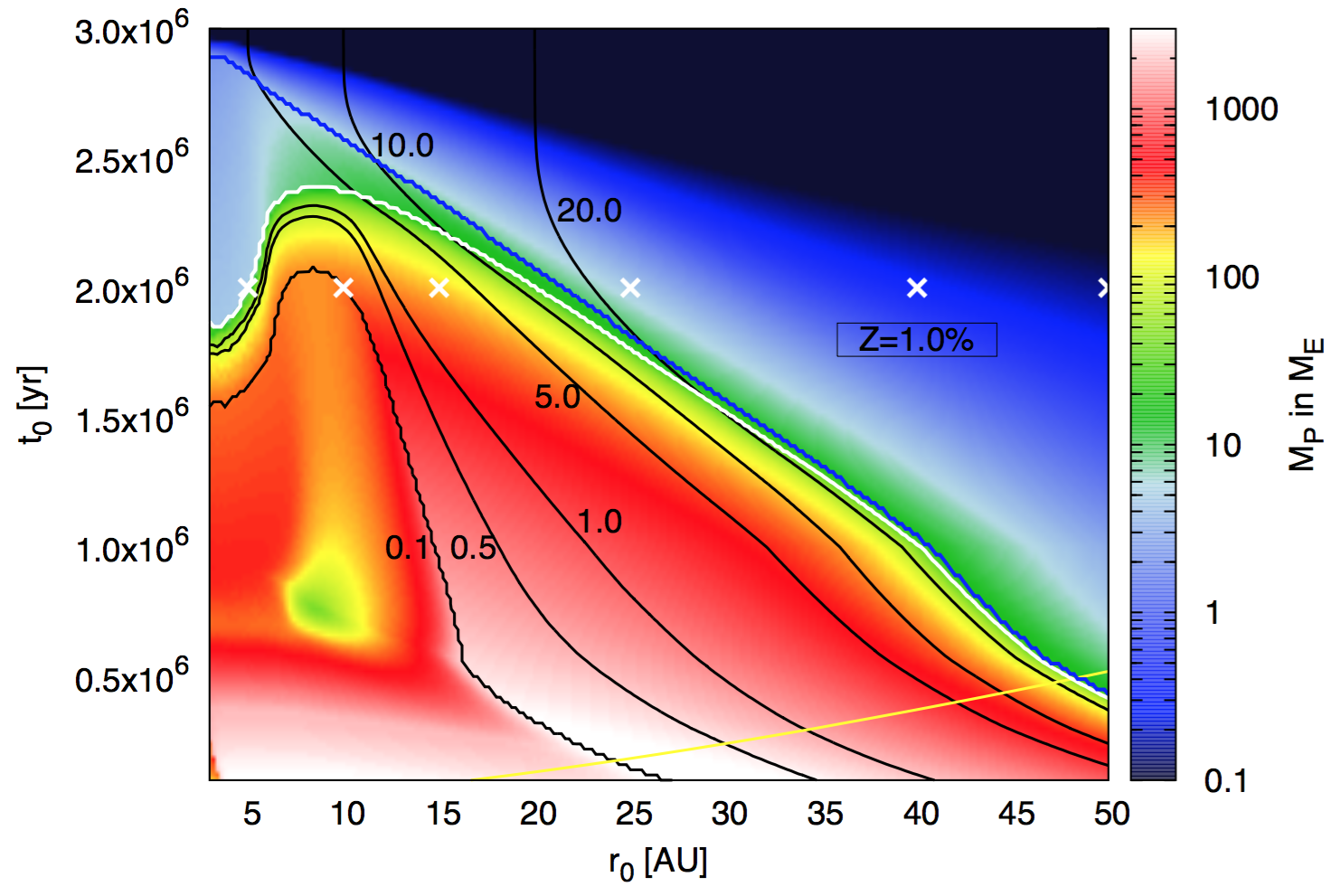 Fig. 1: Final masses of planets depending on the initial conditions, formation distance to the host star r0, and formation time t0 in the disk. All planets below the white line have undergone massive gas accretion and end up as gas giants. The black lines indicate constant planetary masses. Bitsch et al. (2015)

The implications for… the Solar System

Every good theory for planet formation has to be able to explain how our own living room, the solar system, came into being. Doing so proves to be rather easy for the pebble accretion model and turns out to be consistent with the Nice model (video here), which explains the bombardment history of the inner solar system with unstable dynamics of Jupiter, Saturn, Uranus and Neptune. However, it fails to reproduce the initial conditions of another famous theory, the Grand Tack scenario, which explains the masses and orbital distances of Earth and Mars and the features of the asteroid belt by letting Jupiter and Saturn travel trough the inner solar system before 10 million years after the formation of the system. A specific prediction the authors can deduce from their models is noble gas enrichment in Saturn’s atmosphere. This is known for Jupiter and — using the pebble accretion scenario— holds for Saturn as well. This is only possible because the accretion of pebbles in this scenario is still sufficient to feed planetary cores very far away from the host star. Out there, the solid density is usually too low to grow planetary seeds, at least through common formation channels. This appealing ability of the pebble accretion model brings us to the next section, when transferring the model outcomes to other planetary systems.

The implications for… planet population synthesis

Figure 2 shows the regimes to which kinds of planets the cores grow for different starting conditions of the simulations of Bitsch et al. 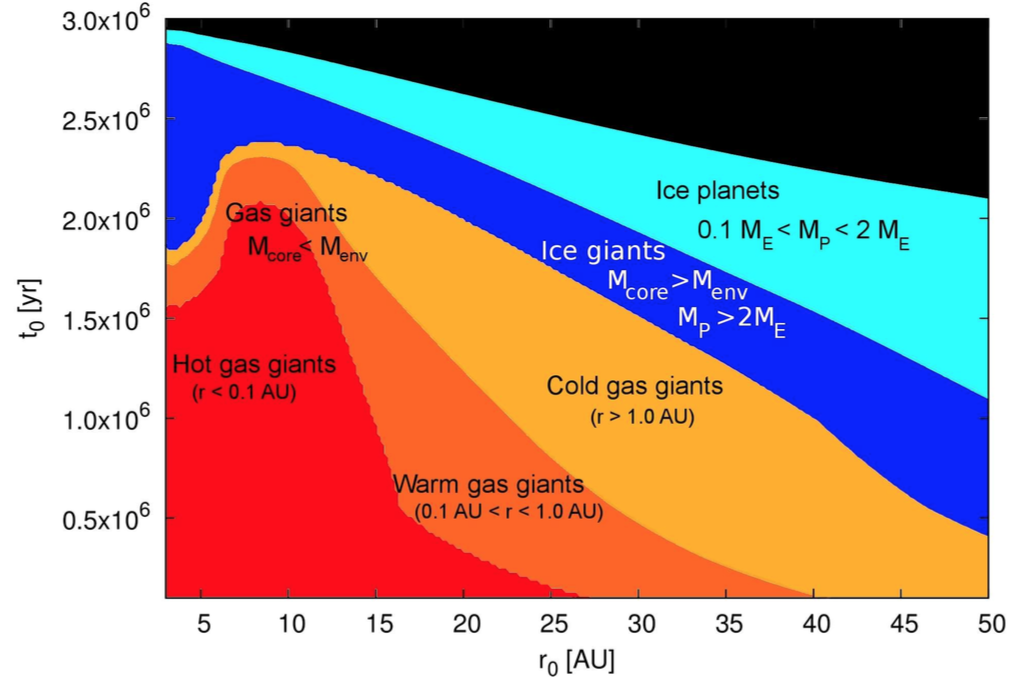 Fig. 2: Planet categories formed in the simulations as a function of formation time t0 and formation distance to the host star r0. The ‘ice planets’ regime is a whole new class of planets which has not been detected so far. Bitsch et al. (2015)

First of all, the authors predict a whole new class of planets which have not been found so far! The turquois regime indicates planets with a more massive core than envelope, but only a few Earth masses, such that they are smaller than ice giants like Uranus and Neptune. In the simulations the ice planets form far out in the disk, where all volatiles are frozen, such that their interior is mainly composed of ices. These planets show up very frequently in the simulations at late stages, at which time most of the gas is gone and they can not accrete much anymore. This kind of planets is not predicted by other planet formation models. Unfortunately, it will be hard to detect them with the current generation of planet observatories, as the ice planets are far out and pretty small…

Additionally, the simulations of the authors feature some hints on the formation channel of ‘Hot Jupiters’. Because it is so easy for the pebble accretion model to form gas giants at large orbital distances it is likely that a lot of them form in the outer disk and one of them is eventually perturbed by the others, scattered into the inner disk and coming to halt just close to the host star.

All in all, my main take-away from this work is that the formation of planets at large orbital distances can be increased by much. This would solve a riddle in current planet formation theories and could further explain extremely massive planets with large semi-major axes, without invoking large-scale gravitational instabilities in the disk.