Without a doubt, one of the most profound questions ever asked is if there are other sentient, intelligent lifeforms in the Universe. Countless books, movies, TV shows, and radio broadcasts have fueled our imagination as to what intelligent alien life might look like, what technology they would harness, and what they would do when confronted by humanity. Pioneers such as Francis Drake and Carl Sagan transformed this quandary from the realm of the imagination to the realm of science with the foundation of the Search for Extraterrestrial Intelligence (SETI) Institute. The search for extraterrestrial intelligence goes far beyond listening for radio transmissions and sending out probes carrying golden disks encrypted with humanity’s autobiography. Some of the other ways astronomers have been attempting to quantify the amount of intelligent life in the Universe can be found in all these astrobites, and today’s post will be summarizing two recent additions to astro-ph that study how we might look for alien technology using the tools in our astrophysical arsenal. The aim of both these studies is to search for extraterrestrial civilizations that may have developed technologies and structures that are still out of our reach, and these technologies may have observable effects that we can see from Earth. This post provides a very brief overview of these studies, so check out the actual articles for a more in-depth and interesting read!

Sailing through the Solar System 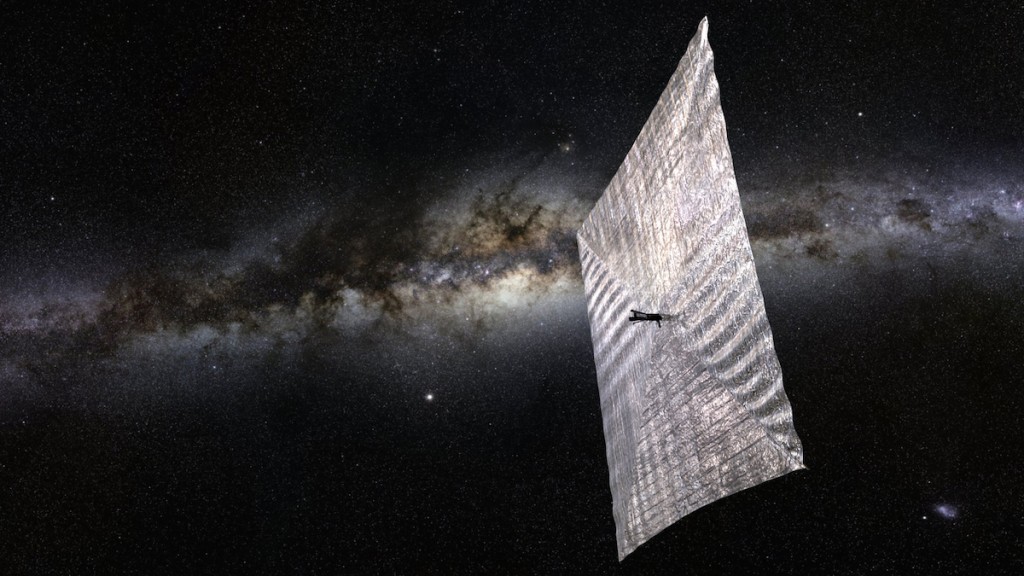 The future of space exploration via rocket propulsion faces a dilemma. To travel interplanetary distances in a reasonable amount of time we need to travel really fast, and to go really fast rockets need lots of fuel. However, lots of fuel means lots of weight, and lots of weight means it takes more fuel to accelerate. One popular idea for the future of space travel is the use of light sails (see figure 1), which would use radiation pressure to accelerate a spacecraft without the burden of exorbitant amounts of chemical fuel. Though the sail could reflect sunlight as a means of propulsion, beaming intense radiation from a planet to the light sail could provide more propulsion especially at greater distances from the star (if the sail had perfect reflectivity and was located 1 AU away from a sun-like star, the solar radiation would only provide a force of about 10 micronewtons per square meter of the sail, which is about the force required to hold up a strand of hair against the acceleration of Earth’s gravity). Hopefully in the not-so-distant future, we will be able to use this technology for quick and efficient interplanetary travel. Intelligent life in our galaxy, however, may already be utilizing this means of transportation. But how would we be able to tell if someone out there is is using something like this? 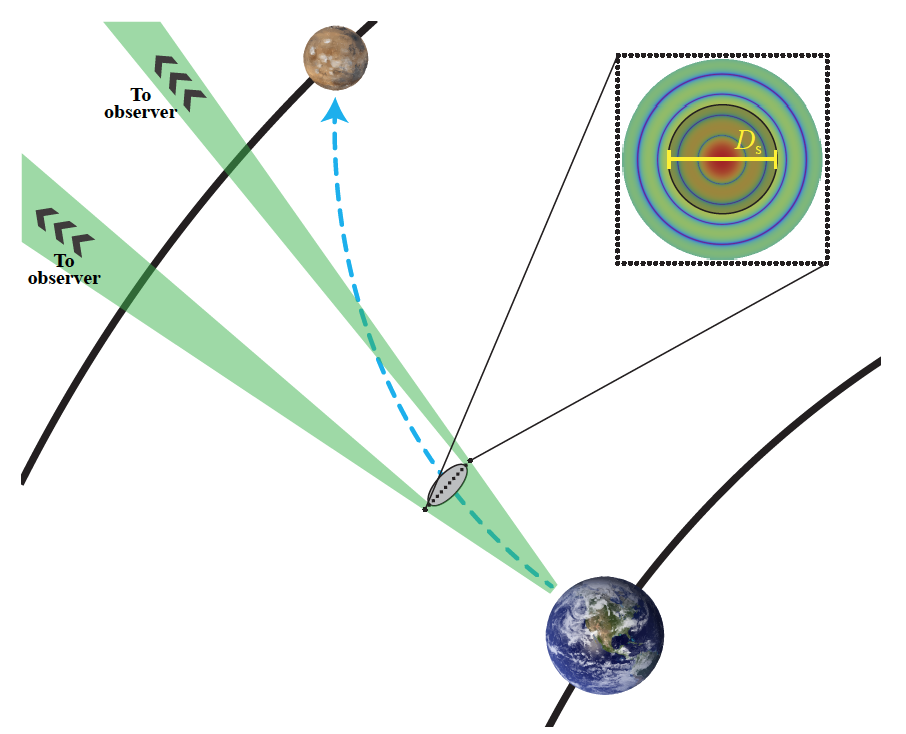 Figure 2. Diagram showing the likely leakage for a light sail system developed for Earth-Mars transit. The dashed cyan arrow shows the path of the light sail, and the beam profile is shaded in green. The inset shows the log of the intensity within the beam profile in the Fraunhofer regime. Figure 1 in paper 1.

The authors of paper 1 analyze this means of transportation and the accompanying electromagnetic signature we may be able to observe by studying a mock launch of a spacecraft from Earth to Mars. Without delving into too much detail about the optics of the beam, during part of the acceleration period of the spacecraft some of the beamed radiation will be subject to “leakage” missing the sail and propagating out into space (figure 2). Since the two planets the ship is travelling between would lie on nearly the same orbital plane (like Earth and Mars), the radiation beam and subsequent leakage would be directed along the orbital plane as well. However, like a laser beam the leakage would be concentrated on a very small angular area, and to have any chance of detecting the leakage from this mode of transportation we would need to be looking at exoplanetary systems that are edge-on as viewed from the Earth…exactly the kind of systems that are uncovered by transit exoplanet surveys like Kepler! Also, assuming an alien civilization is as concerned we are about minimizing cost and maximizing efficiency, the beaming arrays would likely utilize microwave radiation. This would make the beam more easily distinguishable from the light of the host star and allow it to be detectable from distances on the order of 100 parsecs by SETI radio searches using telescopes such as the Parkes and Green Bank Telescope. 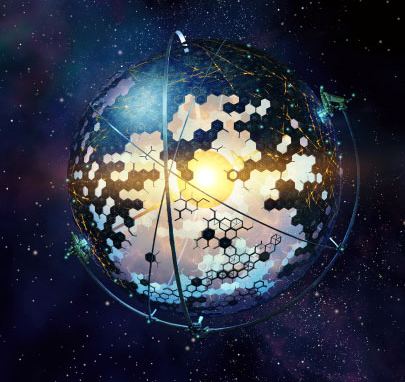 Though most SETI efforts are confined to our own galaxy, there are potential methods by which we can uncover an alien supercivilization in a galaxy far, far away. As an intelligent civilization grows in population and technological capabilities, it is assumed that their energy needs will exponentially increase. A popular concept in science fiction to satisfy this demand for energy is a Dyson sphere (see figure 3). These megastructure essentially act as giant solar panels that completely encapsulate a star, capturing most or all of the star’s energy and using it for the energy needs of an advanced civilization. To get an idea of how much energy this could provide, if we were able to capture all of the energy leaving the Sun with an 100% efficient Dyson sphere, it would give us enough energy to power 2 trillion Earths given our current energy consumption. If this much energy isn’t enough, alien super-civilizations could theoretically repeat this process for other stars in their galaxy. Paper 2 considers this type of super-civilization (known as a Kardashev Type III Civilization) and how we may be able to detect their presence in distant galaxies.

The key to detecting this incredibly advanced type of astroengineering is by using the Tully-Fisher relationship – an empirical relationship relating the luminosity of a spiral galaxies to the width of its emission lines (a gauge of how fast the galaxy is rotating). If an alien super-civilization were to harness the power of a substantial fraction of the stars in their galaxy, the galaxy would appear dimmer to a distant observer since a large portion of its starlight is being absorbed by the Dyson spheres. These galaxies would then appear to be distinct outliers in the Tully-Fisher relationship, since the construction of Dyson spheres would have little effect on galaxy’s gravitational potential and rotational velocity, but decrease its observable luminosity. The authors of this study looked at a large sample of spiral galaxies, and picked out the handful that were underluminous by 1.5 magnitudes (75% less luminous) compared to the Tully-Fisher relationship for further analysis (figure 4). 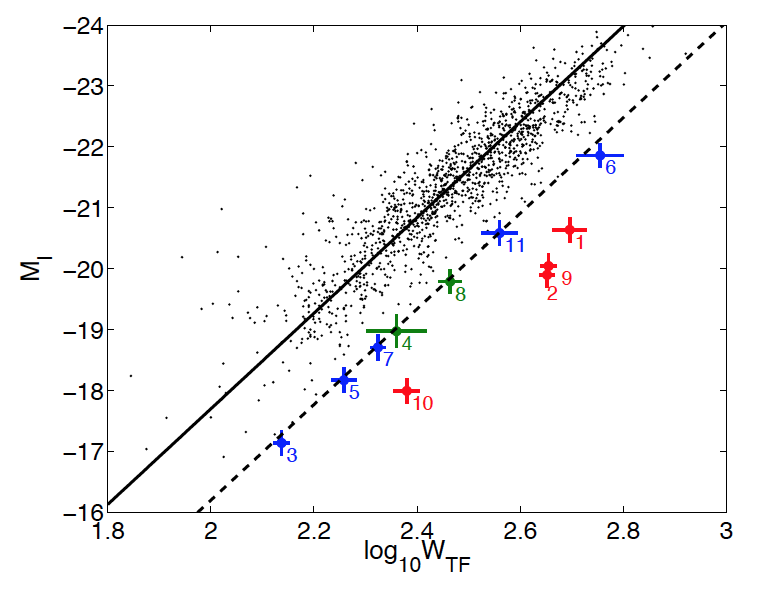 To further gauge whether these candidates have sufficient evidence supporting large-scale astroengineering, the authors looked at their infrared emission. Dyson spheres would likely be efficient at absorbing optical and ultraviolet radiation, but would still need to radiate away excess heat in the infrared. In theory, if one of the candidate galaxies had low optical/ultraviolet luminosity but an excess in the infrared it could provide more credence to the galaxy-wide Dyson sphere hypothesis. However, in reality, this becomes a highly non-trivial problem that depends on the types of stars associated with Dyson spheres, the temperature at which the spheres operate, and the dust content of the galaxy (see paper 2 for more details). Needless to say, better evidence of large-scale astroengineering in a distant galaxy would require a spiral galaxy with very well-measured parameters be a strong outlier in the Tully-Fisher relationship. Though none of the candidates in this study showed clear signs of alien engineering, the authors were able to set a tentative upper limit of ~0.3% of disk galaxies harboring Kardashev Type III Civilizations. Though an extraterrestrial species this advanced is difficult to fathom, the Universe would be a very lonely place if humans were the only form of intelligent life, and this kind of imaginative exploration may one day tell us that we have company in the cosmos.