What is the closest star to us? Nope, it’s not Proxima Centauri, which is 4.2 light years away. There’s one just right next door — the Sun. Astronomers use properties of the Sun such as its mass, brightness, and metal abundance as yardsticks for characterizing properties of other stars and astrophysical objects .  Naturally this is because the Sun is the most thoroughly-probed and well-studied star. But just like your best friend who still holds certain surprises in his/her life, various aspects of the Sun remain to be studied. Today we will look at one puzzling aspect of the Sun: gamma-rays from the “solar disk”.

The Sun and its Disk

The Sun has been imaged in different wavelengths, all the way from low-energy radio waves to high-energy x-rays which dominate the kilo-electron volt or keV energy regime.  Extending beyond x-rays are gamma rays, thousands (MeV) to a million (GeV) times more energetic than x-rays. The gamma-ray Sun is rather quiet and shy, with the exception of occasional solar flares accelerating solar particles to produce gamma-rays. However, there is a diffuse but more energetic gamma-ray emission appearing as a halo around the Sun. This gamma-ray halo has two components that span different angular sizes and arise from different mechanisms. The first component is caused by cosmic rays (high-energy particles coming from outside the Solar System) scattering off solar photons and is more extended, while the second component is thought to originate from cosmic rays interacting with the solar atmosphere. The second component is much closer to the Sun and smaller in angular size, dubbed the “solar-disk”.

Studies of the solar-disk have only been made possible ~4 years ago with the Fermi Large Area Telescope (LAT), and a 2011 study found that the observed solar-disk gamma-ray emission is about 10x higher than predicted. The authors of this paper tackled this puzzle by using 4x more data from Fermi compared to the 2011 study — 6 years of data compared to 1.5. They also searched for more features in this gamma-ray flux to better understand its origin and production mechanism.

To extract the solar-disk signal, the authors subtracted off various background emissions such as diffuse background and detector background, as well as emission from the more extended gamma-ray halo. The authors binned up the solar disk as concentric rings and modeled the distribution of the gamma-ray flux within each ring in bins of energy. The end result is the solar-disk spectrum, shown in figure 1. The gamma-ray spectrum extends all the way to 100 GeV — this is first time the Sun has been detected above 10 GeV and no theory exists so far for how the solar-disk should behave in this energy range. The observed gamma-ray flux is also ~5x higher than predicted, thereby corroborating the finding of the 2011 study. 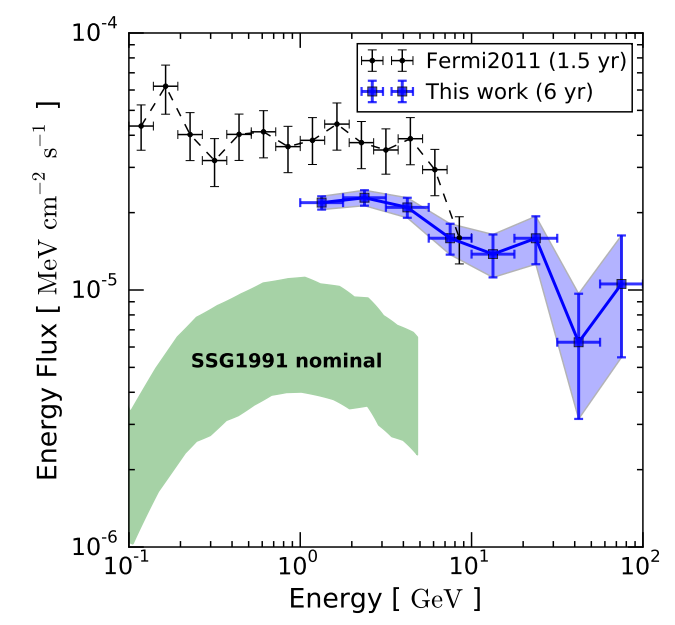 Fig 1 – Energy spectrum of the solar-disk. The green band denotes the theoretical prediction which this paper (blue band) and the 2011 paper (black dots and dashes) compare to. Both observations disagree significantly with the prediction, signifying missing ingredients in the theoretical construction. But what exactly? This is the million-dollar question no one currently has the answer to.

The observed gamma-ray emission also exhibits significant time variation. In particular, it is found to anti-correlate, with sunspot activity, as shown in figure 2. This is an important (anti-)correlation (one quantity increases when the other decreases) as it implies, instead of solar flares, the cosmic-ray origin of these gamma rays. Although cosmic rays have been conjectured to be the sources of the solar-disk emission, this is the first direct evidence that supports that hypothesis. 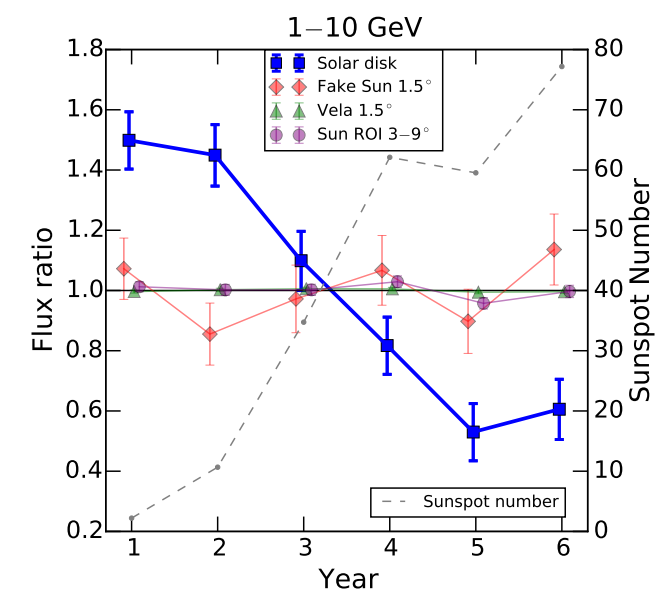 Fig 2 – Ratio of the gamma-ray flux to its 6-year average. A flux ratio of 1 means no time variation. Ignoring the red, green, and purple markers (referring to various background sources) which are time-independent, the solar-disk emission (blue line) shows a significant fluctuation over time. The flux variation also goes in the opposite direction as the sunspot number (faint black dashes), a proxy for solar activity.

Gamma-ray emission from the Sun remains poorly understood. Using Fermi data that span a longer timescale, the authors confirmed that the observed gamma-ray from the solar disk is 5-10x higher compared to prediction. The reason behind this discrepancy remains elusive. The solar-disk component is also detected for the first time at > 10 GeV range, where no theoretical prediction exists. From the anti-correlation of the solar-disk emission with solar activity, we gain evidence of the cosmic-ray origin of the solar-disk (and the complicated role magnetic fields play in the gamma-ray production process). As with most scientific pursuits, we end up with more questions than when we first started. As more sleuthing ensues, let us continue to tune in to the gamma-ray Sun. I promise, you won’t be harmed in the process.