Dry Out Super-Earths via Giant Impacts

The early phase of planetary systems – a very brutal era

Forming planets is a violent business. After the first bigger bodies of several hundred kilometers have accumulated in the protoplanetary disk (see here for short summary of the main growth’ steps), they further grow via giant collisions. Today’s paper used these giant impacts between two bodies of comparable size to explain the enigmatic observations of planets which do not seem to fit in the widely accepted theory of planetary assembly, namely the systems Kepler-36 and Kepler-11. 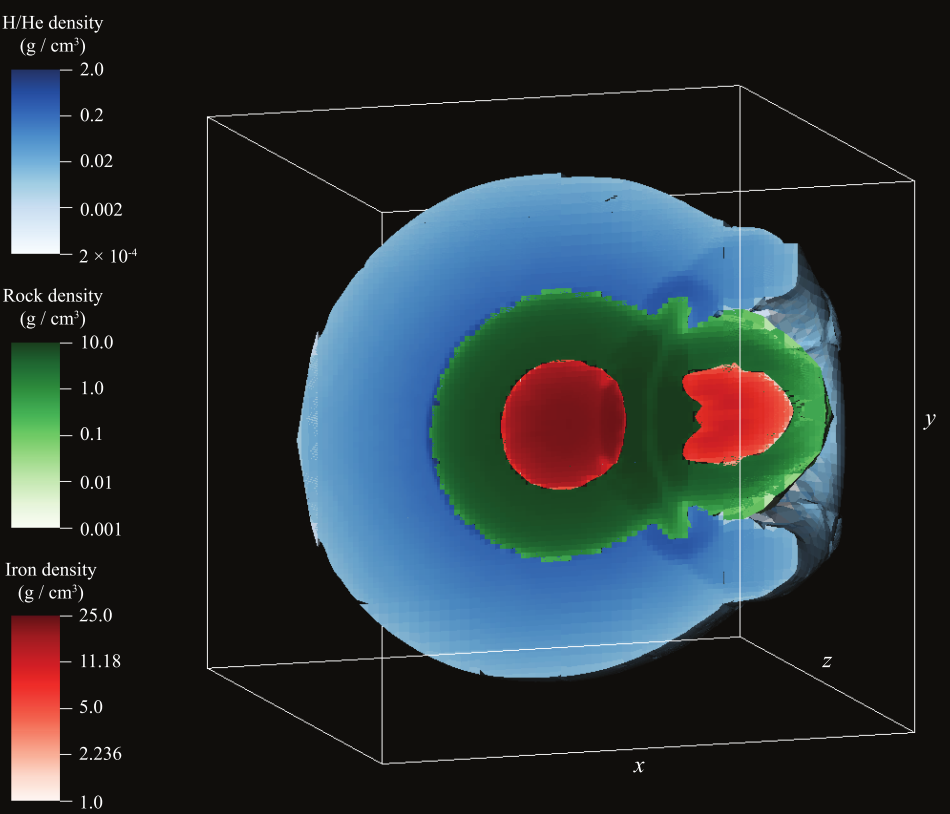 Figure 1: Stage in the simulation when the impactor hits the main body. Shown is  a 2d cut through the 3d structure of the model. The color coding gives the compositional structures of the bodies: red is the iron core, green the silicate mantle and blue the H/He atmosphere. When the impactor crashes into the planet the bodies merge and parts of the system will be expelled. Credit: Liu et al. (2015)

These two systems host planets on orbits very close to each other and the central star. Surprisingly, these planets are very different from each other, albeit their close neighbourhood. Both systems host a mini-neptune (a planet of < 10 Earth masses with a massive atmosphere and very small mean density) close to a super-Earth (a terrestrial planet with < 10 Earth masses). The problem here lies within their close-in configuration but their fundamental difference in structure. The formation paths of these two planet categories are thought to be dramatically different. Thus, we are left with the question how they can be so different, but so close to each other! Figure 1 shows the idea the authors propose to resolve this issue. Using computer simulations they smash a massive planetary embryo in an already existing planet with a massive hydrogen/helium atmosphere. Depending on the difference in velocities of the planet and its impactor the outcome of the collision will be different.

The two variations the authors explore are shown in Figure 2 below.

Figure 2: Impact in the accretionary (left) and disruptive regime (right). For a description see the text. Credit: Liu et al. (2015)

One option (left) for the collision is to have a small velocity difference. This means the injected energy is relatively small and the impactor crashes into the planet and merges its structure with it. The second option (right) is to increase the velocity dispersion. Then, the involved energy is greater and the collision is much more violent. Before we further dig into the outcome of the simulations, let’s have a closer look at the time sequence in the images. The color coding shows the density, going from purple (low) to bright yellow (white). The snapshots go from (a) before the impact, (b) immediately after the impact, (c) at 1.56 h after, (d) 18 h after, (e) is an enlarged version of  (d). The dashed circle around the merged body in panel (e) indicates the hill radius, which means the sphere in which the gravity of the merged planet dominates.

The difference in the figures above might be only minor. However, if we have a more in-depth look at the composition of the material in the simulation the deviations are drastic.

Figure 3: Compositional, radial mass fraction in the accretionary (left) and disruptive (right) simulation at 18 h after the impact. Iron, silicate rock and H/He gas are represented via gray, light coral and blue, respectively. The dot-dashed lines from top to bottom show the initial configurations of the simulations. The dashed lines, starting bottom left, indicate the cumulative mass (yellow), enclosed silicate rock (red), enclosed iron (black) and enclosed H/He (blue) in Earth radii. Comparing the mass fractions of H/He left and right it becomes clear that the high-speed impact to the right drives out most of the atmosphere. Credit: Liu et al. (2015)

The most obvious feature of the figures above is the striking difference in H/He atmospheres. The collision outcome of the accretionary simulation is much more calm and the atmosphere is retained by the target body. Therefore, the merged planet is able to hold on to most of its original envelope. In contrast, the more violent collision to the right leads to most of the atmosphere molecules being ejected into space.

However, the authors’ do a quick post-processing check if the accretionary simulation system could hold on to its atmosphere after the impact. There is one essential problem: young stars tend to send out very aggressive extreme ultra-violet (XUV) radiation, which has the potential to destroy the atmosphere. In fact, this poses a problem to the surviving parts of the atmosphere, as it is inflated in comparison with the initial state. Hence, much more XUV photons tackle the atmosphere and tear it apart. Because of this both simulations lose their atmosphere after the impact, and even the relatively modest impact with low velocity dispersion can’t save the atmosphere.

In summary, the authors were able to demonstrate that such a violent collision of two planet-sized bodies is in principle enough to “dry out” volatile-rich planets, which offers an explanation mechanism for seemingly weird systems, such as Kepler-11 and Kepler-36. However, the principle formation pathways of planetary systems are still under much debate and maybe other reasoning can lead to similar architectures. Nevertheless, the study of Liu et al. demonstrates the fascinating advances in recent computational methods and emphasizes the potential of geophysically motivated modeling approaches in astrophysics.