I’ve been writing for Astrobites for about a year now and all my contributions so far have been summaries of important results in astronomical & astrophysical articles. But things are different today! I’m breaking out of my monthly routine! Today’s Astrobite deals with the featured topic in Nature‘s mid September issue: Interdisciplinarity, which can roughly be described as collaboration among different disciplines. Since Nature‘s coverage of the topic applies to all fields in science, let me try to pick out the most important points and discuss them in the context of astronomy & astrophysics.

It is probably not surprising that a journal that covers a broad range of different research fields generally argues in favour of linking different disciplines.  Nevertheless, there are good reasons to do so. Heidi Ledford gives a nice overview of the history in interdisciplinary research and how it has evolved. Centuries ago there was no distinction between different fields. Even in the 18th century, it was quite normal for an academic to consider all important questions throughout different fields. A prominent example is the philosopher Immanuel Kant, whose nebular hypothesis for the formation of the solar system is in principle the dominant explanation for protoplanetary disks in modern research. (Imagine what would happen if a philosopher claims a new theory for an astrophysical problem?) Over the last few centuries, science has advanced at high speed and become specialised, branching into many different disciplines and sub-disciplines. Without such specialization, mankind would certainly not have developed its level of technology. (It’s up to you to decide, whether such technological achievements are positive or negative.) Many problems require concentration without being distracted by doing other things. However, purely specialising on one specific field does not allow us to tackle some of the really big questions in life. Answering those questions requires explanations and collaboration of different disciplines. For instance if astronomers were not aware of a device called the CCD, all theses and articles using the Sloan Digital Sky Survey would not exist and our understanding of the universe would be much more shallow. 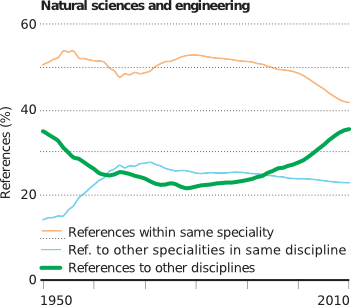 Figure 1: Evolution of references in natural science to other disciplines over the last 65 years. (The plot is part of a figure in Richard Van Noorden’s article in the featured issue of nature. He names as his source: V. Larivière & Y. Gingras in Beyond Bibliometrics (eds B. Cronin & C. R. Sugimoto) 187–200 (MIT Press, 2014))

Thus, in parallel to increasing specialisation people realized the need to think beyond their own field. Although the first citation of the word “interdisciplinary” in the Oxford English Dictionary goes back to 1937, interdisciplinary research – according to the article – wasn’t seriously discussed before the 1970s. Another article in the same issue by Richard Van Noorden shows a neat plot illustrating the increase of cross disciplinary references in science since 1950 (see Figure 1).

Nevertheless, it is certainly yet another step from citing different disciplines to actually collaborating with researchers from other fields. Several researchers have been (and some still are) very negative towards interdisciplinary projects, as reflected in statements such as this one by an anonymous physicist: “Interdisciplinary research is for people who aren’t good enough to make it in their own field.” However, today’s thinking – at least from Nature‘s point of view – seems to move more towards: “[…] if you go for a big problem you need to be interdisciplinary.” (Quote by Theodore Brown, a former head of one of the first large interdisciplinary centres in the US.) 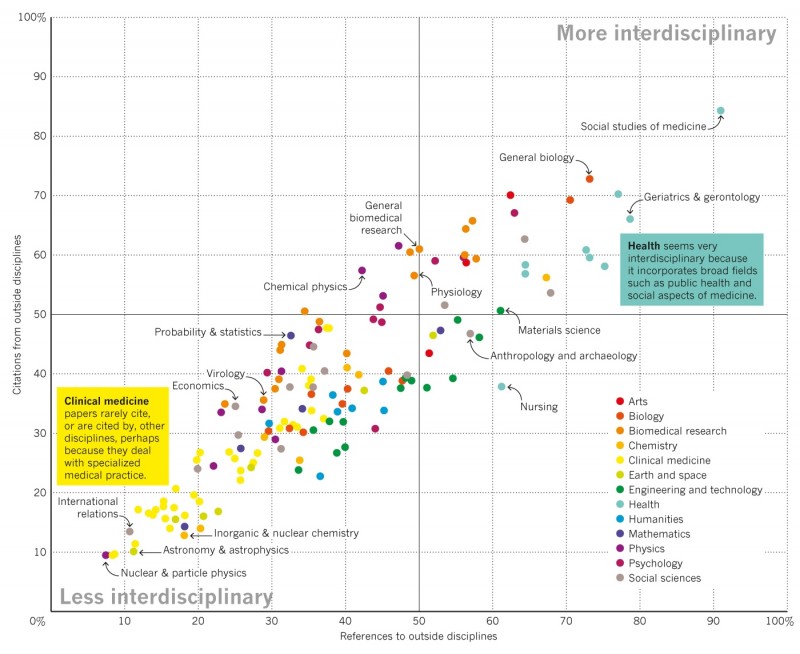 Figure 2: Overview of citing and referring to other disciplines in different fields of research. (The Figure is adopted from Richard Van Noorden’s articles in the featured issue. His source is: V. Larivière & C. R. Sugimoto, personal communication)

But what about interdisciplinarity in our field? Figure 2 gives a nice picture of how astronomy and astrophysics is doing in terms of interdisciplinarity with respect to other fields by comparing number of references to and from our field. … Have you had a look? Yes, it is the dot in the left corner, which means that it is among the least interdisciplinary ones. It’s up to you to decide whether astronomy & astrophysics are doing “well” or “bad” regarding the plot, and an interdisciplinary approach to find Dark Matter will probably not make things easier. However, let’s look a little bit to the future. How might/should this plot like several years from now? I’m probably not stepping on anyone’s foot if I claim that exoplanetary research is the hottest topic in astronomy & astrophysics at the moment. But what is it that makes it so popular? It is popular because it might reveal signs of extraterrestrial life. Recently, researchers have started to study exoplanetary atmospheres, which requires knowledge of chemistry, biology and geology. Thus, it is unavoidable that interaction among these disciplines will increase. But then we can step even one step further and ask, are people so excited about possible small bacteria on a far distant planet? Yes, you as a passionate reader are, but typically, people are more fascinated by whether there are life forms out there that are similar to us. Allowing (more) studies of these questions opens the door not only between astronomy & astrophysics and other natural sciences, but also between astronomy & astrophysics and social sciences such as sociology, when it comes to the question of civilisation interactions. Thus, from my point of view, it is not a question that astronomy & astrophysics will move diagonally upwards in the diagram over the coming years. The question is: just how much?

[The featured image of this article is also the cover of the discussed Nature issue. Credit for the illustration: Dean Trippe]