When explaining stellar formation to unfamiliar ears, gravity usually comes off as the star of the show. A shock impacting a cloud of gas and dust will produce a slight overdensity of material, allowing the tug of gravity to collapse this region into a smaller and smaller size, heating it up along the way and forming a disk through conservation of angular momentum. Through gravity’s unwavering grasp, the center of this collapsing cloud becomes hot and dense enough to trigger fusion, and voila – we created a star. Simple, right? Unfortunately, we forgot about a key and poorly understood player: magnetic fields.

Effects from magnetic fields have ability to both enable collapse (e.g. through ambipolar diffusion) or hinder collapse (e.g. through magnetic pressure support) of large star-forming clouds, and at smaller scales these fields mediate wind launching, outflows, and jets. Magnetic fields are also believed influence if a protoplanetary disk can form and how it will accrete, which means they are integral in the formation of planets around young stars. Magnetohydrodynamic (MHD) simulations can give us some sense of this process, but adding magnetism into the complexity of hydrodynamic simulations is not an easy task and can result in ambiguous or contradictory results. To truly understand the role of magnetic fields in star and planet formation, we need to observe these fields around young stars. But how do we “see” magnetic fields? Obviously, traveling hundreds of lightyears to one of these baby stars with a compass would be highly impractical. Thankfully, we can infer a great deal about magnetic field structure by looking at how magnetic fields affect their environment – namely through observing the polarization of light. 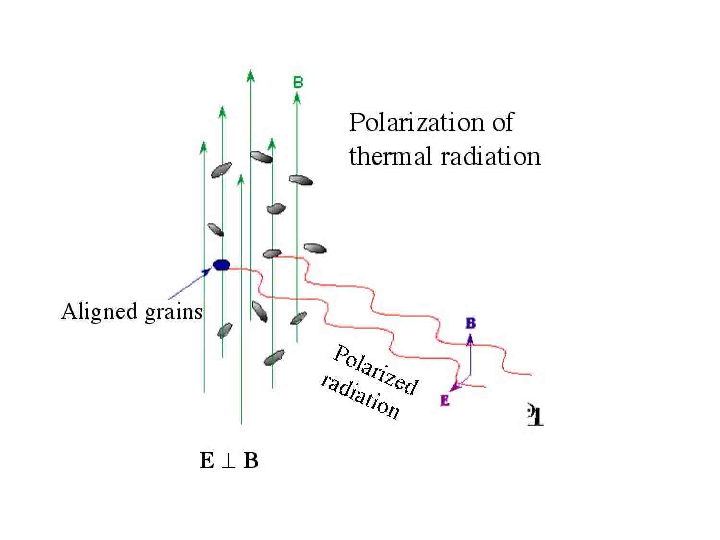 Accretion disks around a protostar are embedded with dust. These dust grains are not necessarily spherical, as they can be elongated like an American football. Magnetic fields in the disk causes the “short” axis of these dust grains to align with its magnetic field lines, the opposite of what would happen to a compass needle that aligns with Earth’s magnetic field. Similar to polarized sunglasses that reduce glare by blocking certain orientations of electromagnetic waves, these aligned dust grains will emit radiation that has an electric field parallel to its “long” axis, causing it to be polarized perpendicular to the magnetic field, and thus giving us a direct link to the field’s underlying structure (see figure 1). Furthermore, dust grains have a hard time radiating at wavelengths larger than their physical size, meaning you can probe the polarization of millimeter- and centimeter-sized grains with millimeter wavelengths.

Today’s paper took one of the closest looks at polarization of light around a protostar to gauge its magnetic field structure. Their target was IRAS 4A, a Class 0 protostar (the youngest class of protostellar objects) residing about 230 parsecs away in the Perseus Molecular Cloud. Their weapon of choice: the Very Large Array (VLA). With an effective baseline diameter of 22 miles across, the combined power of the 27 radio dishes in the VLA provided unprecedented detail of IRAS 4A in millimeter wavelengths with an angular resolution of about one fifth of an arcsecond. This is equivalent to seeing two lightbulbs separated by a meter as separate sources, if you were in Chicago and the light bulbs were in New York. Since angular resolution increases linearly with wavelength and decreases linearly with telescope diameter, huge effective diameters are necessary to achieve this angular resolution for the long wavelengths investigated by the VLA .

Figure 2. Magnetic field map of IRAS 4A derived from polarized light at 8.1 mm (left) and 10.3 mm (right) wavelengths. Contours start at 3-sigma uncertainty in the continuum emission and each contour is separated by a factor of sqrt(2) in uncertainty. The red lines show the measured magnetic field direction, and longer lines correspond to a larger polarization fraction (amount of light polarized in this specific direction). The synthesized beam is shown in the bottom right corner. Figure 2 from Cox et al.

Cox et al. measured the four Stokes parameters to understand the magnetic fields in the disk around IRAS 4A. These parameters indicate the total polarization, combined to determine the degree and orientation of linearly polarized, circularly polarized, and unpolarized light. Their results are mapped in figure 2, which shows the polarization of light around IRAS 4A at two different millimeter wavelengths. By analyzing contaminate sources of unpolarized (e.g. free-free) and polarized (e.g. synchrotron) emission, the authors were able to confirm that the polarization was due primarily to dust aligned with the magnetic field. They found that at small disk-sized scales the magnetic field wraps around the star, a morphology indicating that the magnetic field is from the circumstellar material rotating close to the central protostar.

Previous measurements of the polarization around this star at lower resolutions saw something quite different: an “hour glass” morphology in the magnetic field structure (see figure 3). This indicates a potential transition in the morphology of the magnetic field structure on larger spatial scales (~250 AU) to smaller spatial scales (~50 AU), though differences in the angular resolution and the particle size targeted by the two studies can also add to the discrepancy. As a test, Cox et al. synthesized poorer resolution with their data, and sure enough reproduced the hourglass morphology (figure 3).

Figure 3. Same as figure 2 with poorer resolution (compare the beam size in the lower right hand corner with the previous plot). This resembles the hourglass morphology seen at larger spatial scales. Figure 4 from Cox et al.

What causes this circular morphology in the magnetic field? The idea is that as material falls from the envelope to the nascent disk it drags “frozen-in” magnetic field lines with it, resulting in a morphological change of the magnetic field from the envelope to the disk. The study also indicates that dust grain growth happens at early times in protostar evolution, since the larger dust grains targeted by this study are more readily polarized than small ones. Though there is still plenty to learn about magnetic fields in these environments, this study puts us closer to fully realizing their effects on star and planet formation.