Ancient Stars from the Cosmic Dawn

Title: Extremely metal-poor stars in the cosmic dawn in the bulge of the Milky Way

Every way you look in the night sky, you see twinkles of ancient light streaming in from the forgotten past. Our observable Universe is teeming with mind-bogglingly large number of stars, on the order of ~1022.  It is incredible to think that roughly 13 billion years ago, there was none. When the largest dark matter overdensities collapsed about one-one hundredth (200 million years) of the Universe’s age, they eventually grew to become the inner regions (or “bulges“) of galaxies by attracting matter around them. Within these murky nebulous regions, the very first stars burst gloriously into existence.

What did the first stars look like? We have never seen one before, but the early Universe left a spattering of clues for us. We think the first stars should be metal-free, because the primordial Universe contained only the simple elements hydrogen and helium. Call us astronomers failed chemists — metals in the astronomy world means any elements heavier than helium, such as lithium, iron, and carbon. Metals are produced in stellar cores through fusion reactions, which are then disposed into the galaxies through supernovae. New stars that form later will then contain some of these recycled metals. As a galaxy ages, its environment becomes more and more chemically enriched from supernovae events. Therefore, the more metal a star contains, the later it forms and the younger it is. The amount of metal in a star is known as its “metallicity”, the logarithmic ratio of the number of metal atoms to that of hydrogen minus the Sun’s metallicity (defined to be 1). It is commonly written as [Z/H] where Z  refers to a certain species of metal; most of the time, Z is iron (symbol: Fe). Young stars rich in metals have positive [Fe/H] while old metal-poor stars typically have negative [Fe/H].

The Milky Way bulge is thought to be swarming with immediate descendents of the first stars. However, it is very difficult to detect them due to dust and crowding from other stars. Using the SkyMapper telescope in Australia, the authors successfully detected 500 metal-poor bulge stars, making this survey the first of its kind.

Among the metal-poor bulge stars, the authors re-observed 23 most metal-poor ones to determine their chemical composition. These 23 stars have [Fe/H] <= -2.3, roughly similar to most halo stars. Despite similar metallicities, these bulge stars formed much much earlier than their halo counterpart. Skeptics might be suspicious of the bulge membership of these stars, since halo stars can sometimes pass by the bulge as interlopers. The authors measured the orbits and velocities of their stars and established that half of them have tight bound orbits around the bulge (including their most metal-poor star) and so confirming that at least half of their 23 stars are real members of the bulge.

…with a distaste for Carbon

The authors compared the chemical composition of their stars with halo stars at the same metallicities to look for possible differences. For most elements, the metal-poor bulge stars are very similar to their halo counterpart. Carbon, however, begs to differ. Many metal-poor stars have abnormally high abundance of carbon compared to iron ([C/Fe] > 1) and the number of stars that are carbon-enchanced increases with decreasing metallicities. Don’t ask why yet — astronomers are still scratching their hands (and working hard for possible explanations). These stars are appropriately named “Carbon-Enhanced-Metal-Poor stars” or CEMP stars. The metal-poor stars in the Milky Way halo are also carbon-enhanced; the metal-poor bulge stars aren’t. This is a double surprise because theory also predicts that we should find more carbon-enhanced stars towards the bulge. Figure 1 shows the carbon abundance vs. metallicity of these bulge stars.

Fig. 1 – Abundance ratio of carbon to iron, [C/Fe], as function of metallicity [Fe/H] of the 23 metal-poor bulge stars in this paper (red dots). Metal-poor halo stars (black dots) and metal-rich bulge stars (blue triangles) are plotted for comparison. The dotted lines refer to Solar values. [Figure 3a from the paper]

Among the 23 stars, the authors uncovered a star with an unprecedented metallicity, one that is at least ten times more iron-poor than other metal-poor bulge stars. This star renews the record as the most metal-poor and oldest bulge star we know today. The authors also did not detect any carbon in the star’s spectrum, achieving only an upper limit (the red arrow in Figure 1). By comparing the chemical composition of the star with synthetic yields from different types of supernovae, as shown in Figure 2, the authors suggested that it could have arise from a hypernova, a supernova that is ten times more powerful. 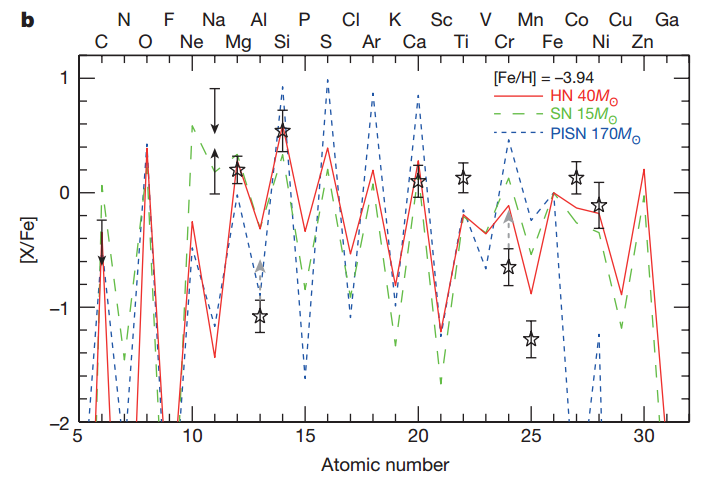 Fig. 2 – The chemical abundance [X/Fe] of the most metal-poor bulge star in this paper for elements X as listed at the top. Measured abundances are marked by the open stars. The various lines are synthetic supernovae yields for a 40 Msun hypernova (HN), a 15 Msun core-collapse supernova (SN), and a supermassive pair-instability supernova (PISN). Compared with other mechanisms, the chemical yield from a 40 Msun hypernova is the most consistent with the observed points. [Figure 3b from the paper]

There is still a lot of room for discovery as the authors only covered one-third of the Milky Way bulge. With a larger and deeper survey, we should be able to find more metal-poor stars in the Milky Way bulge to help propel our currently very limited understanding of these stars and the first stars.