The gravitational clutches of our Milky Way galaxy is all-encompassing and far-reaching, binding 35 mini galaxies in eternal orbital dances around itself. These mini galaxies are better known as dwarf galaxies because they only contain about 1/100 of the number of stars in the MW, pertaining to their low stellar mass, faintness, and small sizes. The total masses in dwarf galaxies are much higher than revealed by the starlight we see, suggesting that they are dark-matter dominated and making them popular sites for searches of dark matter interactions. Of the current 35 MW dwarfs, eight ultra-faint dwarfs (UFDs) — more than ten times less luminous than dwarf galaxies — were discovered last year by the Dark Energy Survey (DES). One of these, Reticulum II or Ret II for short, stands out chemically-peculiar among all of MW dwarfs.

Like other UFDs, Ret II mainly consists of hydrogen and helium and extremely devoid of elements heavier than that, i.e. they are very metal-poor. Any trace of metals is the result of enrichment from star formation events such as supernovae. Because the early Universe is thought to be chemically pristine as well, dwarf galaxies, especially UFDs, are regarded as the closest surviving relatives of the first galaxies. This makes it interesting to study the chemical enrichment history of UFDs to better understand galaxy formation. When Ret II was discovered last year, a group of astronomers obtained high-resolution spectra of its nine brightest stars and discovered that, compared to other UFDs in the MW, seven of these stars are significantly enhanced in a group of elements known as neutron-captured elements (here‘s the paper). Other than this odd feature, these stars all exhibit similar metallicities as normal UFD stars.

R-process: What, Where, and How?

Neutron-captured elements are “neutron-captured” because they are formed when heavy atoms such as iron collide with one or more free neutrons to form heavier elements. When the capture process is faster than the decay time of the mash-up of the original element and the captured neutron, it is known as the rapid or r-process. As you might have guessed, there is also the counter version of the r-process, known as the slow or s-process, but here we are concerned with the r-process.

Why do we care about this obfuscately-named process? Because how and where it occurs still remain a mystery. Well, to be fair, we do have some ideas and the two most popular ways are via core-collapse supernovae and/or neutron-star mergers, since both harbors the required number density of ingredients at the right temperature. However, due to energetics, signatures of r-process elements in dwarf galaxies claim more of a neutron-star merger rather than a core-collapse supernovae origin. So people naturally invoke enrichment via a neutron-star merger to explain Ret II’s overabundant r-process elements. Figure 1 shows the abundance of two r-process elements, Barium and Europium, of Ret II’s nine brightest stars (red circles) compared to other UFD stars (colored markers) and MW halo stars (gray points). The number ratios of Barium and Europium are comparable to most known r-process enhanced halo stars in the MW but much higher than other UFD stars. In addition, Ret II has similar star formation history and metallicity as other UFDs, so its enhanced r-process should arise from a single rare event rather than a gradual enrichment process common to UFDs. A neutron-star merger is often a rare event. However, the authors of today’s paper showed that it is not possible to enrich Ret II via a neutron-star merger and proposed a different enrichment path involving dark matter.

Fig 1 – Abundance of neutron-captured elements Barium and Europium as a function of metallicity [Fe/H] in log-scale in Ret II’s nine brightest stars (red open and filled circles) compared to the MW halo stars (gray points) and other UFD stars (colored markers). Among Ret II’s nine stars, only the two most metal-poor stars (red open circles) are not r-process enhanced while the rest shows ~100x more Ba and Eu compared to other UFD stars. [Figure 2 of the linked paper in paragraph 2]

Through an order-of-magnitude calculation, the authors showed that neutron-star mergers are extremely unlikely in UFDs due to their very low star formation; taking into account Ret II’s 100x lower star formation history relative to other UFDs, neutron-star merger becomes even less likely. So what they proposed to have caused r-process enrichment in Ret II is this: neutron-rich fluid ejected from lone neutron-star implosion. When dark matter accumulates in the center of neutron stars, they can become so massive that they implode and turn into black holes. As neutron-rich fluid approaches the neutron-star-becoming-a-black-hole object, it becomes tidally squeezed (or spaghettified). When tidal squeeze from the black hole exceeds the self-gravity of the neutron fluid, this energy difference propels the fluid out of the black hole, much like how toothpaste comes oozing out when we tightly squeeze our toothpaste tube — this ejection process is also more affectionately known as the “tube of toothpaste” effect. 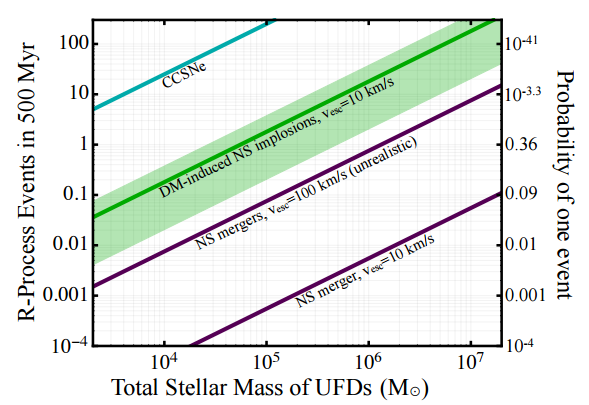 Fig 2 – Expected number of r-process enriching events in UFDs in 500 Myr (approximately their star formation timescale) as a function of their stellar masses. Ret II is thought to be enriched by one r-process event, which matches the expected number of events from dark matter-induced neutron-star implosions. Neutron-star mergers and core-collapse supernovae produce either too few or too many events. The velocities attached to the neutron-star mergers are connected to the dynamics of the merging system. [Figure 2 of today’s paper]

One check we can do to determine if r-process in UFDs is connected to dark matter or not is to look at r-process enrichments in globular clusters. Globular clusters are stellar dominated, unlike UFDs which are dark-matter dominated. However they share similar properties as UFDs, such as simple star formation history and low uniform metallicity, which makes them a good control sample. Despite appearing spot-on in their numbers, the authors conceded that mechanisms such as Kozai oscillations and enrichment from rapidly-spinning highly-magnetized neutron stars (or magnetars) could be viable means to enrich Ret II, although they did not explore these any further. This paper presents an interesting and feasible way to connect dark matter with chemical activities in UFDs, although we will need observers to look for more UFDs and hydro simulators to code up detailed simulations to test the authors’ hypothesis.