The Multiple Identities of Omega Centauri

Title: The mosaic multiple stellar populations in ω Centauri: the Horizontal Branch and the Main Sequence

The Milky Way, our lovely home galaxy, is not a lone rider in the Universe. Besides its many companions in the Local Group, it is also surrounded by star clusters, which are clumps of stars smaller than galaxies. Star clusters can be distinguished as open clusters and globular clusters. The former are often young and contain fewer than a few hundred members, while the latter are usually old and composed by thousands of stars. It was believed that star clusters formed all their stars roughly at the same time and from the same gas cloud. They would then be represented by a “single stellar population”, with a single age and a single initial composition. However, as our observational techniques improved, it became clear that the story is not so simple: many clusters turned out to show multiple stellar populations. Among those, the most prominent is the globular cluster Omega Centauri.

What makes Omega Centauri so special?

First of all, it is huge. It is at least twice as massive as 47 Tucanae, the second largest globular cluster. It contains approximately 10 million stars and has a total mass of around 4 million solar masses. It is so big that some astronomers suggest it is not actually a cluster, but the nucleus of a disrupted dwarf galaxy. Secondly, its color magnitude diagram (CMD), which is the observational analog of the famous Hertzsprung–Russell diagram, shows multiple turnoff points, as you can see in Fig. 1. 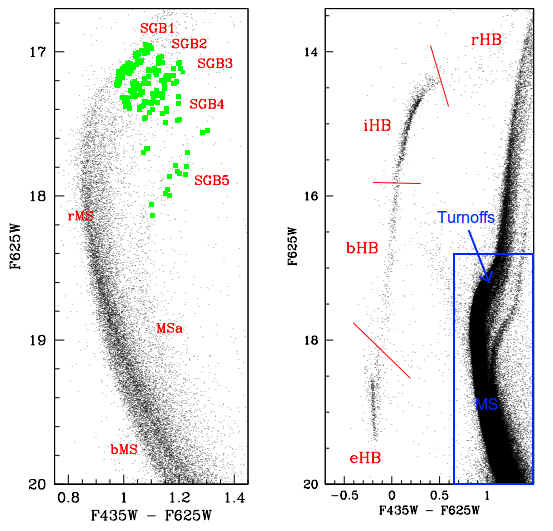 Figure 1: Two regions of Omega Centauri’s CMD, showing different main sequence (MS), sub-giant branch (SGB), and horizontal branch (HB) populations. The y-axis is the magnitude in Hubble’s F625W filter, and the x-axis is the color using F435W and F625W filters. The authors identify four HB populations: extreme (eHB), blue (bHB), intermediate (iHB), and red (rHB). The five SGB populations are numbered, and the three MS populations are labeled bMS, MSa, and rMS. The left panel enlarges the region in the blue rectangle. You can see in both panels that the main sequence ends in multiple turnoff points, hinting at the existence of multiple populations. (Labels in blue added by the astrobiter.)

What did we miss?

One thing that usually gets overlooked when one talks about stellar ages is the metal abundance (remember, metal in astronomy means everything that is not hydrogen or helium), or metallicity for short. But it is actually quite important. The metal content changes the opacity of a star’s atmosphere, essentially changing its luminosity, or, in other words, the rate at which the star releases its energy. And that of course affects its lifetime, changing the position of the turnoff as a consequence. So, even though multiple turnoffs can mean multiple populations with different ages, it can also mean multiple populations with the same age but different metallicities. To investigate this possibility, the authors of this paper separated Omega Centauri into different populations based on their metallicities and helium content. For that, they relied on results in the literature which used spectroscopic observations to estimate these quantities for stars in different regions of the cluster’s CMD.

Using the properties of each population, the authors simulated the CMD of each single population. Essentially, they assume the stars in it form according to a given mass-distribution (the initial mass function) and use evolutionary models, which depend on both mass and metallicity, to see where each star would lie in the CMD at different ages. Then they sum up the results of all populations, obtaining one simulated CMD for the cluster. This is called population synthesis, and it is often used to study different populations in galaxies. 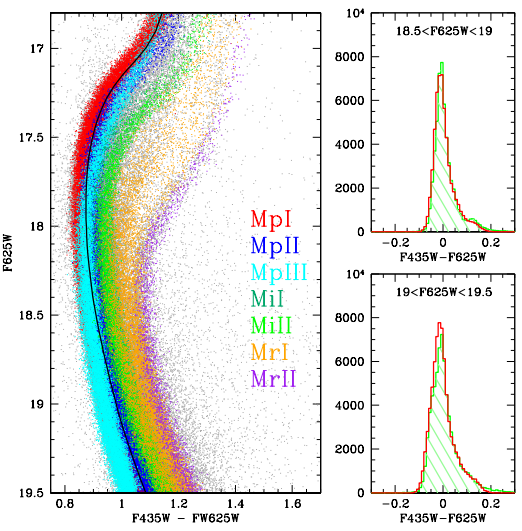 Figure 2: The left panel shows the best simulated CMD for Omega Centauri, using multiple populations with different metallicities and same age. The populations are color-coded and labelled MpI-III, MiI-II, and MrI-II. The solid line is a fiducial line, used to rectify the position of each population. The histograms on the right compare the simulation (red) to observed data (shaded green) on the indicated magnitude bins.

To choose the best combination of ages to describe Omega Centauri, the authors compared the simulated CMD to the observed one (Figure 2). It turns out that the observations can be very well described by a single age, with a small spread of 0.5 Gyr between the different populations. A similar result was obtained to another cluster, NGC 1651, as featured on this astrobite. This small spread is more consistent with Omega Centauri indeed being a globular cluster, not a galaxy remnant. The spread in metallicity would mean that the cloud which formed Omega Centauri as a cluster had some metallicity gradient, and that would be why it’s not exactly a single population. However, having one solution with single age does not mean that there are no solutions with a large age spread, consistent with a galaxy remnant. And in fact there are. So the authors stressed that they were only trying to answer the question “is it possible to have a small age spread?”. To that the answer is yes, but we still cannot rule out the other possibility. It turns out that different metallicities for each population in a cluster can explain the multiple turnoffs as well as different ages in a galaxy remnant. So the true identity of Omega Centauri remains a mystery.