Understanding a Monster: the structure of a massive galaxy

A little over fifty million light-years away lives a monster. It’s a galaxy called M87, and everything about it is oversized: it’s one of the largest galaxies we know of, the undisputed king of the Virgo Cluster (one of the nearest large clusters of galaxies). It contains perhaps a trillion stars, many of them held in more than ten thousand globular clusters, while hosting a supermassive black hole at its heart with an event horizon larger than our solar system (Long term readers may recognise M87 from previous astrobites). Yet to the untrained eye it looks a little featureless … even boring? That’s not true in reality of course; for if we can understand how M87 came to be then perhaps we’ll also understand the limits of the physics governing how galaxies (and clusters of galaxies) form.

All galaxies are constructed from dark matter and stars, whose interactions govern the formation of structure. The authors of today’s paper are most concerned with investigating this structure, from its outlying regions (which interact with the cluster it lives in) to the central core (where the black hole it hosts dominates over everything else). 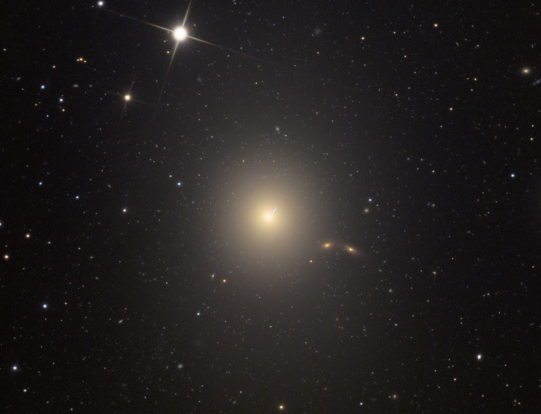 Understanding the structure of a galaxy entails figuring out how much mass there is in stars and how much in dark matter at different distances from the centre of the galaxy. This can be done by exploring the gravitational forces at work. A ‘dynamical tracer’ is anything with a measureable velocity that moves in a gravitational potential well. The name comes from the use of their dynamics (how they move) to trace the galaxy’s gravity. With tracers at multiple radii the shape of the galaxy’s potential well can be inferred.

Using this kind of technique the authors are able to find the total mass of the galaxy (stars plus dark matter) by looking at M87’s satellite galaxies: these are smaller galaxies bound to it by gravity. That’s a good start, but it doesn’t tell us anything about the detailed structure of the galaxy. To do this they use two additional tracers: the stars themselves and the many globular clusters hosted by M87.

The galaxy is too far away to resolve individual stars, but that isn’t a serious problem. Taking spectra from different parts of the galaxy and measuring their relative redshifts tells you whether those bits are moving towards you or away from you, giving you the galaxy’s rotation. The velocity dispersion (the spread of velocities amongst the stars contributing to the light) can also be measured from spectra since the spread of velocities smears the spectra out. This tells you whether on small scales the stars are mostly moving together (ordered rotation) or in all sorts of directions. In the latter case the system is ‘pressure supported’, meaning the reason it doesn’t collapse under its own gravity is not because it’s rotating but rather because there are just as many stars flying outwards as inwards.

The globular clusters provide a more traditional set of tracers because they can be individually picked out even from fifty million light-years away. With the additional information provided by the satellite galaxies about the total mass these techniques are nearly sufficient to separate the contribution of stars and dark matter. Yet it is still a difficult problem! The structure remains uncertain due to lack of knowledge of the shape of the dark matter distribution, the fraction of stars that are dim dwarfs rather than bright giants, and whether the movement of stars on small scales is isotropic or not. The last is a particularly intractable ‘anisotropy problem’; even if you know that the movement of stars on small scales is not orderly (they are not all moving in the same direction), there remains some uncertainty about their motion. If you can’t actually see the individual stars you don’t know whether ‘disordered’ means ‘equal amounts moving in every direction’ (up, down, left, right, forwards, backwards…) or ‘equal amounts moving in two directions’ (forwards, backwards). You can get the same signal from both, but each leads to a different answer for the inferred gravitational potential.

To handle these and other issues the authors turn to Bayesian analysis. Growing ever more popular among modern astronomers, this approach to statistics incorporates pre-existing knowledge into the analysis in order to robustly quantify how certain one can be about one’s conclusions. Without going into the full details, the analysis tells us that the best-fitting model for the dark matter and stellar mass profiles is the one shown in Figure 2. Also shown are some results from other authors, which clearly agree well. 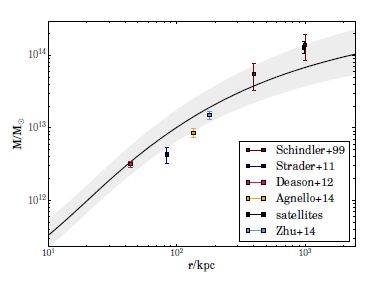 The authors are able to draw a number of important conclusions from their work, tackling not one but rather two open questions in astrophysics.

Firstly, they find that the mass profile is not strongly peaked in the middle. Simulations of the universe which only contain dark matter predict strongly peaked (‘cuspy’) mass profiles, but observations have disagreed over whether this actually happens. The resolution of this problem isn’t yet clear; it may be that including stars and gas is enough to change the shape of the mass distribution, or perhaps we need to tweak our theories about dark matter.

The authors also find that the stellar mass is roughly what would be predicted from how bright the galaxy is – albeit only once the anisotropy problem described above is accounted for. This is by no means obvious, with some previous work indicating that in very massive galaxies like M87 the distribution of stellar masses leans more towards dwarf stars than it does in the Milky-Way. Including more dim dwarf stars adds to the stellar mass without changing the brightness of the galaxy much, so this is an important result.

The authors are careful to caution against inferring too much from a single galaxy, but the paper unquestionably offers a fascinating insight into one of the most interesting galaxies of all.