The Kepler satellite has ushered in an era of exoplanet research, with currently 1642 confirmed and ~3800 candidate planets (exoplanets.org). Do check out this awesome orrery of Kepler planets compiled by a professor at the University of Chicago. You’d probably be struck by the wide ranges of configuration, size, and number of the planets in these systems. Some revolve at breakneck speeds while others lazily plod along their orbits; some are baby planets while others are simply gargantuan in size. Within this colorful garden of exoplanet varieties, there emerges a common theme: a large fraction of these systems are multi-planet systems, not unlike our own Solar System. How stable are their orbits across a wide range of planet masses?

An orbit is considered stable if none of the bodies collide or are ejected after some arbitrarily large orbital periods. The dynamical stability has been studied extensively for low-mass planets, with planet-star mass ratio μ = Mplanet/Mstar < 10-3 (for example, the mass ratio of Jupiter with respect to our Sun is ~10-3). In low-mass multi-planet systems, stability is usually framed in the context of the Hill stability criterion, which gives the minimum orbital spacing to avoid collisions between any two planets. The critical radius is known as the Hill radius, measured in units of the mutual Hill radii of the two planets in this paper. The intra-spacing of planets is usually expressed in terms of the number of Hill Radius, or ΔHill. Direct orbital integrations with Np >= 5 low-mass systems show that the more widely-spaced planets are, the more stable the orbits become.  Unlike low-mass systems, the orbital stability of massive multi-planet systems (or super-Jupiters, with μ >= 10-3) remains an open question. Does the low-mass stability trend extend to high-masses in the same manner? The authors seek to answer this question.

The authors ran a series of numerical integrations with various combinations of intra-planet spacing δ (a function of semi-major axes and μ; equation 3 in the paper), multiplicity Np, and planet-star mass ratio μ. They focused only on systems with Np=3 and Np=5 at μ = (10-5, 10-3, 10-2.5, 10-2); systems with more planets at the intra-planet spacings considered in this paper would imply formation in unphysically large and massive protoplanetary disks. Figure 1 shows instability time versus orbital spacing δ, as compared to lower-mass stability model shown as dashed lines. While high-mass planets also become increasingly stable at large planet-planet separations like their low-mass counterparts, the high-mass ratio and lower Np systems deviate somewhat from the low-mass relation. Given this, the authors explored if there is a different way to express planet-planet spacing that would result in an instability vs. spacing relation that is applicable across all mass ratios. The answer is yes, and for that one first needs to understand the source of instability within these systems: resonance overlapping. 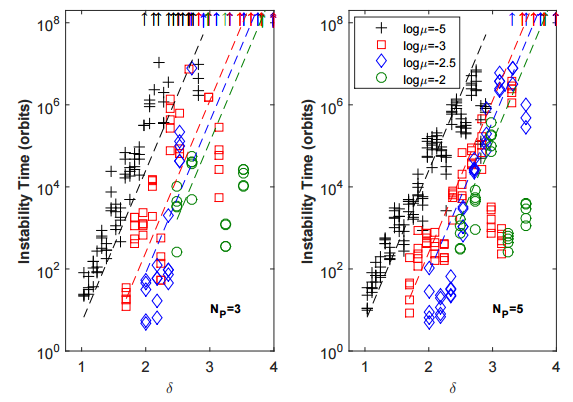 Fig 1 – Instability time in terms of number of orbits as a function of orbital spacing δ for Np=3 (left) and Np=5 (right) planet systems. The different markers refer to the different planet-star mass ratios μ while the dashed lines are relations from low-mass stability models. [Figure 2 of the paper]

Resonance occurs when two or more objects are in sync in their frequencies, driving the object that is being acted upon to higher amplitudes. For orbits, a type of resonance known as mean-motion resonance can happen when the orbital periods of two bodies are integer ratios of each other, such as the 2:3 resonance between Pluto and Neptune, which also happens to be a first-order resonance (integers in the ratio differing by one). Rather than being situated at an exact location, mean-motion resonances typically span a certain width as a function of eccentricity. As such, some resonances may overlap, leading to chaos as planets traveling through these overlap regions feel simultaneous perturbations from the different resonances. When the orbital spacing is expressed as the fractional width of the zone where first order resonances overlap, or δaro, where aro is the semi-major axis where first order resonances overlap, the relations for different mass ratios in Figure 1 collapse to a single broad relation. This is shown in Figure 2. Now, neither the slope nor the intercept of the relation depends on mass. In this new form, both the high and low mass planets become less stable when the orbit spacing approaches the mean-motion resonance overlap zone, i.e. when δaro = 1. The scatter in this new relation is due in part to varying initial orbital phases of the systems. 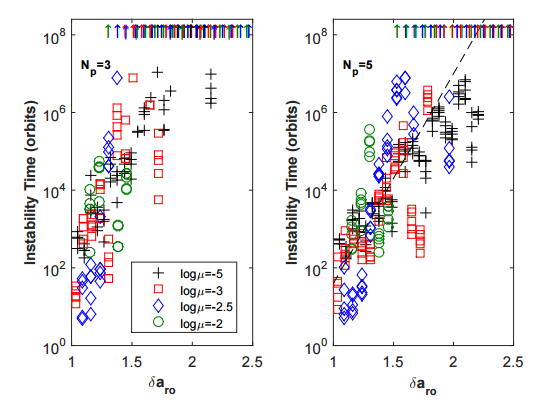 Fig 2 – Same as Fig 1 but now as a function of a new orbital spacing metric δaro, which is the fractional width of the zone where first order mean motion resonances overlap. [Figure 3 of the paper]

In a nutshell, the authors showed that massive planets do not obey the same instability relation as low-mass planets due to the increasing importance of resonance overlapping at high planet-star mass ratios. To better study the stability of these high-mass systems, the authors introduced a new orbital spacing metric expressed as a fraction of the zone of overlapping mean motion resonances. The authors applied their high mass stability result to debris disk systems of the Scorpius-Centaurus OB association. They found that nearly half of the disk systems could not host more than three super-Jupiters due solely to orbital instability, thereby placing limits on the number of detectable massive planets.