Hypervariables in the nucleus of galaxies

Don’t be fooled by the serenity of the night sky, by the sense of constancy it imparts whenever you look up the heavens. Our Universe is not at all dull and static. It is vibrant and full of buzz, inhabited by objects that change in brightness. Some do so ever so suddenly and terrifically (e.g. supernovae, blazars, gamma ray bursts, and the mysterious fast radio bursts) while others vary their brightness in a mild and periodic manner (e.g. cepheid variables). There are others who choose to go the bursty routes (e.g. cataclysmic variables) and of course, the oddballs and mavericks (e.g. the WTF star). Given the diversity of variable objects, no wonder their taxonomy is a labyrinth of cryptic names and characterization, paralleling that of supernovae types — do we really need to add one more class to the list? According to the authors, we might have to.

The authors searched for tidal disruption events (TDE) — dormant black holes activated when a passing star is torn apart by the black hole — in the nucleus of galaxies using PanStarrs-1 data. They looked for transients that have brightened by at least 1.5 magnitudes (i.e. four times brighter) since their SDSS observations taken roughly ten years ago. They found 76 objects with such magnitude variation and followed them up with more imaging and spectroscopy. Figure 1 shows the photometry of the transients, plotted as g-r vs. u-g colors. The dashed lines divided the transients into red, blue, and ultra-blue objects based on their colors. More than half of their nuclear transients are blue objects, whose colors are consistent with the colors of quasars denoted by the shaded ellipse. 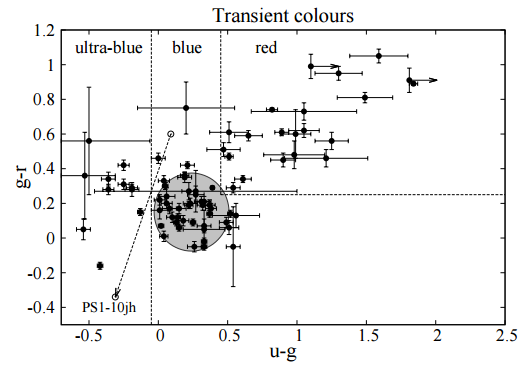 Fig 1 – Colors of the transients in this study. The gray ellipse shows the colors of quasars from SDSS. The transients are divided into ultra-blue (u-g < -0.05), blue (between ultra-blue and red), and red (u-g > 0.45, g-r > 0.25), as denoted by the dashed lines. Majority of the blue transients have colors similar to quasars. [Figure 1 in the paper]

Monitoring of the nuclear transients revealed that red objects decayed fast (fading fast in brightness) while blue objects decayed slowly or are still rising. While a picture is worth a thousand words, a spectrum is often worth a thousand pictures. Spectroscopic information help shed light on the identities of these objects: fast-red objects tend to be supernovae while slow-blue objects are AGNs (active galactic nucleus). Figure 2 shows some example light curves of these fast-red and slow-blue objects. While typical AGNs vary by a few tenths of a magnitude, the authors’ AGNs are ten times more variable. They also decline slowly (taking several years) and smoothly in brightness, atypical of normal AGNs. In their attempt to look for  tidal disruption events, the authors instead stumbled across a group of slow and blue hypervariable AGNs. A search for such hypervariable AGNs in SDSS turned up a handful of analogs; these objects are not extremely rare but they are also not too common.

Why weren’t these AGNs discovered in SDSS? It may be that they are too faint to be recognized as AGNs by SDSS a decade ago, but have since brightened significantly via some unknown mechanisms. The authors looked into four possible scenarios behind this extreme brightening. First, they investigated if their objects are simply TDEs, and concluded that the implied masses of the black holes and stars consumed would need to be ten times larger than previous TDE events. The authors then considered extinction variation caused by obscuring clouds similar to the dusty materials clouding broad line regions (BLR) in quasars. If this was the case, the colors of the AGNs should change over time and their light curves should display erratic variations, none of which were seen. The third scenario is short eruptive outbursts from the AGN accretion disks. Though possible, the authors couldn’t draw more conclusive statements due to our lack of understanding in the physics behind quasar variability and lack of detailed models.

Lastly, could microlensing be the culprit? The authors did some order of magnitude estimates and found the microlensing timescale to match the observed events, while also producing the shapes of the light curves. Although microlensing looks to be the most favorable explanation, more work is needed to definitively exclude the other models. The authors would need to look for foreground lensing objects, conduct long term monitoring, and construct a larger sample of these hypervariable AGNs. Meanwhile, let us continue to speculate the nature of these objects and be dazzled by the eclectically variable Universe.