What’s your first go-to source for an unfamiliar topic on the internet? If you said Wikipedia, you’re not alone. For many people, Wikipedia is the primary source of information about astronomy and science. However, many Wikipedia articles about science topics are incomplete or missing, and women are underrepresented among scientists with biographies.

To address this, the AAS Astronomy Education Board teamed up with the Wiki Education Foundation to host an edit-a-thon as part of the Wikipedia Year of Science. More than forty attendees spent the better part of three hours working through tutorials, creating new articles, and editing existing ones. The session was generously sponsored by the Simons Foundation.

The Year of Science initiative seeks to bring Wikipedia editing skills to the classroom and help new editors find sustainable ways to contribute to Wikipedia in the long term. Anybody can create a free account and start editing!

As a first-time Wikipedia contributor, I took the time to go through nearly all the tutorial exercises and familiarize myself with the process of editing a page. I decided to flesh out one section in an existing page about asteroseismology. Others created biography pages from scratch or selected various astronomical topics to write about. To me, the editing process felt like a cross between writing a blog post and a journal article, in a hack day type environment. Working through the tutorial and some examples renewed my empathy for learners who are tackling a new skill set for the first time. A full summary of our contributions is available. Altogether, we contributed nearly 13,000 words to 44 articles.

The Limits of Scientific Cosmology: The Way Forward (by Gourav Khullar)

After the town-hall with an open mic that raised exceptional questions in the morning, some of the pioneers of the field of scientific cosmology were here with their concluding remarks about the future of the field. John Carlstrom laid down the pipeline for future surveys that not only provide us with interesting constraints on current physics, but give us the opportunity to test new physics. He discussed the CMB, galaxy cluster growth, the Hubble constant and Baryonic Acoustic oscillations as parameters that would define our model of the universe cohesively in the future. The importance of facilities like LSST, SKA, DESI, CMB-S4 were discussed, and Carlstrom emphasized that over the next two decades these fantastic machines will decide the fate of scientific cosmology. Leonard Susskind followed this up with a theoretical framework of how the ideas of inflation and vacuum energy could lead to our understanding of whether String Theory could be the correct theory of the universe.

He touched upon multiverses with his analogy of ‘a submarine floating in a sea with just the right amount of buoyancy balancing gravity’ – a multiverse can have universes with different parameterized cosmological constants! Moreover, in Susskind’s opinion, the only true limit that inhibits our understanding of the features of our universe beyond the cosmic event horizon was the event horizon of an event or phenomena. Jim Peebles concluding this mesmerizing series of talks with his opinions on how physics ought to be direct and assertive with its theories, and should take pride in its explanatory power (or should it?).

Peebles: “expect surprises” and “think outside the box” — yes! #aas228

His comparison of local vs. high-redshift cosmology in terms of scales of problems was outstanding, and he encouraged the audience and the community to keep an open mind. After all, in Sean Carroll’s words, we do live in a “preposterous universe”, and the time is almost right to explain it all.

This “The Limits of Scientific Cosmology” series at #aas228 has been absolutely fantastic. @AAS_Office please put videos on youtube!

The final press conference of the meeting covered three topics from the categories of black holes and gamma-ray bursts.

Fred Rasio (CIERA/Northwestern University) opened the conference with a discussion of how the systems that LIGO detected might have formed. There are two primary models for how these black-hole binaries are created. In the first, they start out as binary systems of two massive stars. If the binary survives the process of both stars collapsing into black holes, then a binary black hole system results.

Rasio focused on the second theory, in which that black holes are formed in dense stellar clusters. These black holes then sink (via dynamical friction) to the centers of the clusters like dust particles settling on the floor of a room, where they form binaries in a “black hole mosh pit” — eventually getting kicked out of the cluster by dynamical interactions. You can read more about their research in the press release here. 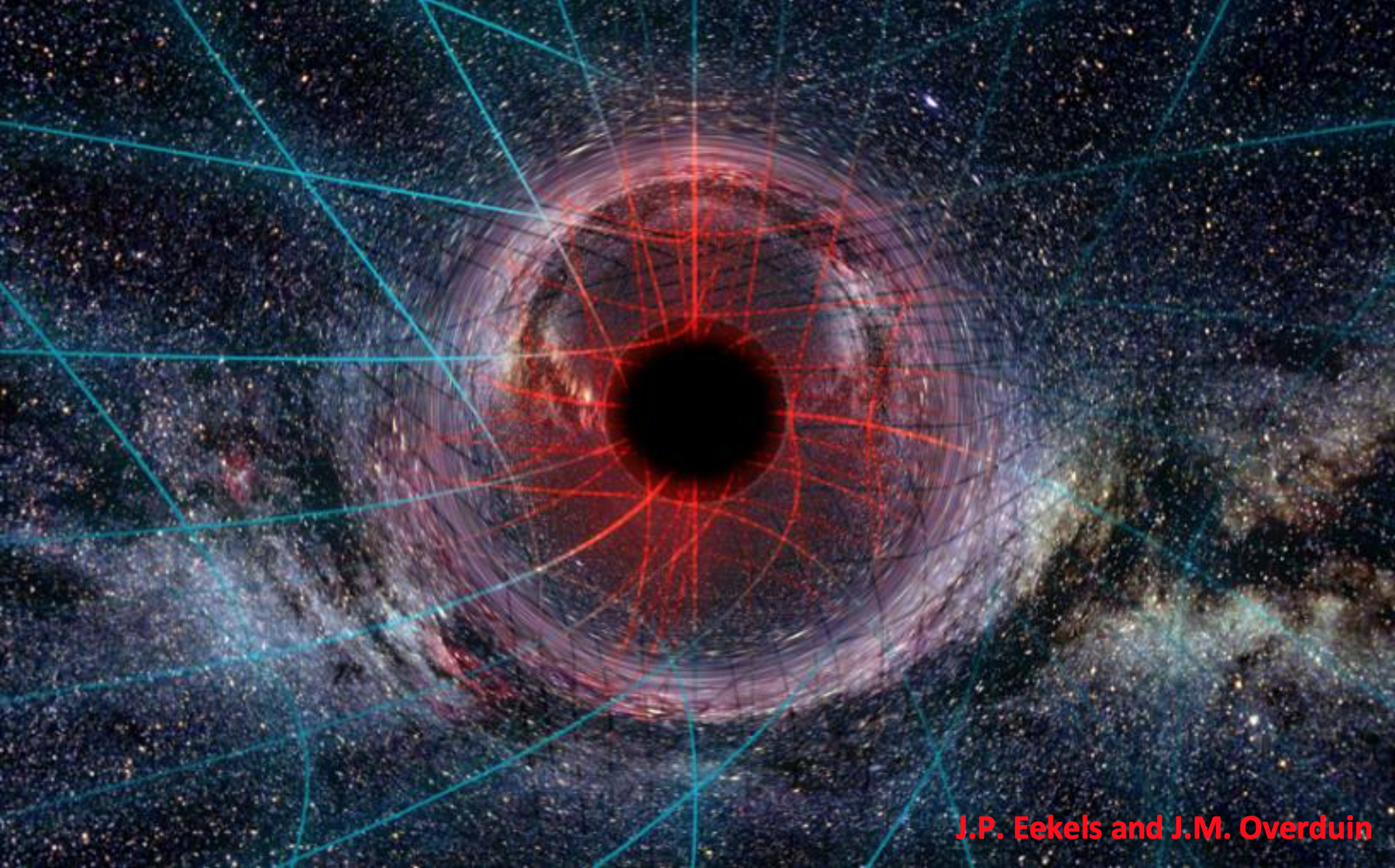 The effects of a spinning black hole on the spacetime around it. [J.P. Eekels & J.M. Overduin]

Next up was Richard Henry (Johns Hopkins University), who spoke about the internal structure of spinning black holes (known as Kerr black holes). Because no light can escape from black hole interiors, we can’t learn what’s in them via observation. Instead, we rely on mathematical descriptions of what their interiors look like. Henry and collaborators have developed a new coordinate-invariant depiction of the structure of black holes that reframes how we think about visualize their interiors. More information can be found in their paper here.

The final press conference presentation was given by Maria Dainotti (Stanford University) on the subject of using gamma-ray bursts (GRBs) as standard candles. Standard candles are astrophysical sources that have known luminosities. We can use the light we observe from standard candles to estimate their distance, making them useful tools for testing cosmological models.

Type Ia supernovae (which always have roughly the same source brightness) are a typical example of a standard candle, and led to the discovery of dark energy in the 1990s. But if GRBs could be used in a similar way, they would be a much more powerful tool: they’re visible out to significantly further distances because they’re so bright. Dainotti and collaborators are analyzing a subset of GRBs from Swift observations that they term “gold GRBs”. By examining the correlations between parameters of these gold GRBs, Dainotti attempts to understand whether they can be used as standard candles.

Plenary Session – From the First Stars and Galaxies to the Epoch of Reionization: 20 Years of Computational Progress (by Gourav Khullar)

Mike Norman’s (University of California – San Diego) plenary talk concluded the AAS Plenary sessions with a treatise on the current generation of simulations that aim to characterize the first stars and galaxies that formed in the Universe.

Mike has been working in the field for a long time, and his collaborators’ work on the Enzo simulations is very well known. This talk was centered around some of the latest Enzo results, with a special emphasis on tracking down the Epoch of Reionization with a new series of runs called the Renaissance simulations. These runs focused on the most primeval galaxies ever formed in a cosmological box. Mike’s team uses Blue Waters, USA’s fastest supercomputer, situated in NCSA at Urbana-Champaign, Illinois (which also manages the large datasets coming out of the Dark Energy Survey!). The talk described the initial dark matter and gas dynamics along with a dark energy-supported metric evolution using simulations of a cosmic box that was the initial universe. The linear fluctuations of this ‘initial universe’ formed the first stars (called Population III stars in the astrophysics community) from hydrogen and helium generated in the Big Bang. Mike and his team established a catalogue of these first stars, and parameterized these into a function that modeled how these stars became the first galaxies, and eventually into the larger galaxies from the merger of smaller galaxy halos.

The statistics of these first galaxies (from the above mentioned Renaissance simulations) show that the first galaxies formed around a redshift of z = 20, roughly around the same time as the first stars, and way before the actual epoch of reionization (at z ~ 7, the concept is described here). The simulation results extended this evolution to the epoch of reionization and put interesting constraints on observations of this epoch, when we can actually see the ionized gas from this epoch in our observations. Investigations are ongoing, and Mike Norman’s team is positive that the Enzo simulations are here to stay for a long time, challenging and collaborating with observations along the way.