A planet greeting from the danger zone

“A new exoplanet has been detected.” While this message would have triggered tremendous excitement among astronomers a few years ago, it speaks for the huge success of exoplanetary detections that by today the message has become daily news. In this respect, the result of today’s article is nothing special: Yet another detection of an exoplanet. Nevertheless, this detection is worthy of being featured on astrobites because the detected exoplanet K2-39b seems to be exceptional. What makes it special is the fact that this planet orbits an old star on at the smallest distance ever observed so far.

The first indication of this exoplanet was detected as a transit event with the Kepler telescope (Figure 1). The authors confirmed that the signal corresponds to an exoplanet by conducting additional radial velocity observations using the High Accuracy Radial velocity Planet Searcher (HARPS) spectrograph in La Silla, Chile, the FIbre-fed Echelle Spectrograph (FIES) at the Nordic Optical Telescope (NOT) on La Palma, Spain, and the Prime Focus Spectrograph (PFS) at the Subaru telescope on Hawaii, USA. Altogether the authors interpret the observations as evidence for an exoplanet of about 8 times as massive as the Earth and about 50 times larger in radius compared to Earth. These properties are not uncommon for exoplanets. The peculiarity of this planet stems from a combination of two other properties:

Looking at the zoo of exoplanets, you find that many exoplanets orbit their host star on small orbits. However, all of these exoplanets with short orbital period are detected around main-sequence stars. In contrast, the host star of K2-39b seems to be a subgiant star. You need to know that a star of less than eight solar masses typically evolves from a protostar to a pre main-sequence star to a main-sequence star before puffing up as a red giant and eventually ending its live as a white dwarf. The host star, which is about four times as massive as the sun, is labeled as a subgiant. That means the star is at the transition stage from the main-sequence to the red giant branch, an hence it is at a later stage of evolution than the host stars of all other exoplanets on small orbits. (Notice that it is the stage of stellar evolution rather than the absolute age of the star that is important. The more massive a star, the quicker it evolves, which means that a lower mass star can be older in absolute terms, though it is still located on the main-sequence.)

The later stage of evolution implies that the star has a larger radius. Therefore the planet orbits the star at a remarkably small distance of only four times the stellar radius. A common interpretation of the lacking exoplanets around late-stage stars is that planets cannot survive at small orbits because they are disrupted by the host star. The question now is: What can explain this detection?

There is no definite answer to this question yet, but let’s briefly look at probable explanations. One possibility is that the authors were just very lucky in observing a planet that will be destroyed very soon. However, the authors point out that disruption of such a planet around a sub-giant is expected to occur in about 10 kyr. Considering stellar timescales are on the order of a billion years, it is very improbable to detect a planet in the danger zone, unless the planet is not in danger of being disrupted. Rather than being caused by tidal disruptions, the small number of short-period planets could result from massive planets forming less frequently on small orbits around heavier stars. An explanation for the latter could be that due to the faster evolution around massive stars, there is less time to form planets in the corresponding protoplanetary disks. 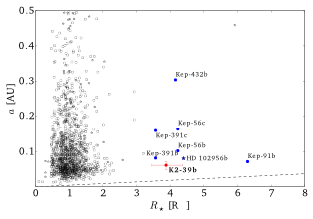 Figure 1: Exoplanets detected according to exoplanets.org by February, 20, 2016. The black circles represent transiting planets, the stellar symbols represent non-transiting planets. K2-39b is illustrated in red and other short-period exoplanets around evolved stars are marked with blue circles. (This is Figure the left panel of Figure 10 in the article.)

However, the explanation for their detection could also be of different origin. Maybe the star is in fact not at such a late stage of evolution as believed. Astronomers typically observe the luminosity and the effective temperature of a star and compare the values to the evolution track on a Hertzsprung-Russel (HR) diagram. This allows to determine the age. In general, it is fine and great to explain the evolution of a star as the evolution in the HR-diagram, but keep in mind that the evolution may in fact deviate to some extend from an idealized model. Yet another possibility for the detection could be that the planet was in fact much smaller in the past and became much larger during the post main sequence stage. Technically speaking, the planet may have inflated due to its own radiation – though the authors consider this possibility as being unlikely for a 50 Earth mass planet at such a small orbit. Either way, to find a definite answer, further observations are required.