How the Sun influences the positron fraction

Title: Time dependence of the electron and positron components of the cosmic radiation measured by the PAMELA experiment between July 2006 and December 2015.

One of the big “unsolved problems” in astrophysics relate to the exact nature of cosmic rays, highly energetic particles that come from outside our Solar System. What are their sources? We know supernova remnants contribute a pretty big fraction, but they probably aren’t the only source. How do these cosmic rays propagate to Earth?  Studying cosmic-ray electrons and positrons (the antiparticle of the electron) are pretty important if we want to solve these mysteries, as both of these particles are produced when a cosmic ray interacts with the interstellar medium. Over the years, many satellites have studied the positron fraction, e+/(e+ + e–) (check out some past Astrobites on the topic here and here). There’s just one problem: recent data at lower energies does not match data from the 1990s.  In this paper, scientists working with the PAMELA instrument offer an explanation, and it all has to do with our Sun.

To understand this, we have to talk about how cosmic rays move through the heliosphere, an area where the solar wind and magnetic field matters a great deal. Cosmic rays making their way to Earth are impacted by many processes in this area: they can be scattered by irregularities in the magnetic field, and can undergo convection and deceleration due to the solar wind. A solar cycle lasts for roughly 11 years, so the intensity of cosmic rays in the heliosphere is also on a roughly 11-year cycle. This process is known as “solar modulation”. 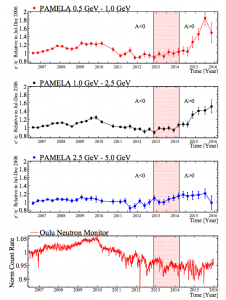 Figure 1: The top three panels show the positron fraction over time in different energy bins. A refers to the polarity of the heliospheric magnetic field, while the shaded region refers to the period of months where the polarity was flipping.  The bottom panel shows data from a neutron monitor, which clearly shows the variation in cosmic ray intensity during different parts of the solar cycle.

There is also a second effect that is just as important as this time dependence of cosmic ray intensity.  Due to the gradients in the heliospheric magnetic field (HMF), drift motions cause positively and negatively charged particles to move in different directions. This direction is reversed when the HMF reverses polarity, which happens at the end of each solar cycle. During times where the solar activity is at a minimum, drift effects are more important. The PAMELA team notes it is important to study the positron fraction during this time in order to see how drift effects contribute to cosmic ray propagation in the heliosphere (remember that positrons form from cosmic ray interactions). Additionally, studying the positron fraction for a long enough period of time (one where the HMF changes polarity) can help clear up differences in experimental results from different years.

This is exactly what the PAMELA team did. They studied the positron fraction in the energy range 500 MeV – 5 GeV for nearly a decade (July 2006 to December 2015). This included the two year time period where the polarity of the magnetic field was undergoing its reversal process. Results can be seen in Figure 1, on the right. Note the clear change in the relative positron fraction after the HMF polarity flips, especially in the two lower-energy bins. When A<0, the positively charged positrons drifted towards Earth through the equatorial region of the heliosphere, where they are influenced by a sheet of current.  Electrons, which drifted towards Earth from the polar regions of the heliosphere, were not influenced by this current. When the polarity switched, this changed, and the electrons became influenced by the current sheet.  This caused the positron fraction to differ between the time periods associated with each polarity.

The authors also note that if one breaks out the data from 2015 only, it is consistent with measurements from the 1990s (the last time the polarity of the HMF was positive).  We now understand a little bit more about how the Sun influences positrons and electrons, and can continue trying to unlock the mysteries of cosmic rays.