Hello astrobiters!  My name is Elizabeth Lovegrove, and starting today I’ll be one of your new daily paper writers.  I’m a graduate student at UC-Santa Cruz currently working on core-collapse supernovae, but I’ve done research in many other fields of astronomy in the past, and it’s one of those that I’m going to talk about today, namely: gamma ray astronomy.

Gamma ray astronomy is a tricky business all around.  When you think of a telescope, you think of an arrangement of lenses, mirrors, and detectors not unlike the chips in your digital camera.  However, once astronomers start getting out to the extreme ends of the electromagnetic spectrum – very low-energy photons, i.e. radio waves, and very high-energy photons, i.e. gamma rays – telescopes start to look very different.  We think of optical photons like waves or drops of water; but individual gamma ray photons pack such a punch that they’re more like bullets.  X-ray photons are well-known to go through skin without stopping; gamma ray photons will go through lead without stopping.  It’s near-impossible to bend them using matter, so equipment like lenses or mirrors can’t be used to focus them.  Instead we just try to catch as many as we can and figure out what direction they came from.

A gamma ray telescope looks like a giant cube, because that’s what it is.  Gamma ray telescopes are built from thin layers of some target material, usually a heavy, dense metal like tungsten that has a big fat nucleus, alternating with layers of detection material like silicon that can count electrons.  When a gamma ray photon hits this telescope, it undergoes a process called “showering.”  When passing close to one of the target nuclei, the photon can spontaneously transform into an electron-positron pair. 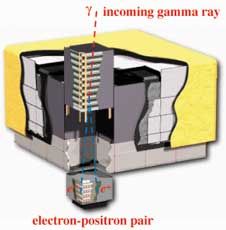 Then the telescope’s computer can go back and use the locations where the shower particles were detected to reconstruct the inbound trajectory of the original photon, and therefore tell us where it came from.

The important thing about a gamma ray telescope, therefore, is that it doesn’t just detect photons – it detects electrons and positrons too.  That’s why gamma ray telescopes are also used to detect cosmic rays, nuclei that have been accelerated to incredible speeds in natural particle accelerators like black holes or supernovae remnants.  And this paper discusses an important new finding by the Fermi Gamma-Ray Telescope, a new space-based gamma ray observatory that was launched in June of 2008.

Fermi’s LAT (Large Area Telescope) instrument is a big detector cube like I described above.  The Fermi team wanted to use LAT to measure the difference in abundance between cosmic ray electrons and cosmic ray positrons.  Because electrons and positrons at cosmic ray energies are generally produced by a known interaction of cosmic ray nuclei with neutral gas floating around between stars, the ratio between the two and how it varies with energy can be predicted.  However, recently a gamma ray instrument called PAMELA, a space-based particle tracker equipped with a magnetic field, confirmed earlier measurements that suggested that there might be a lot more positrons at higher energies than we expect.  This would imply that there are cosmic processes somewhere out there that are generating positrons via a totally different mechanism, not just creating them as a byproduct of cosmic ray interactions.

The Fermi team, naturally, wanted to measure this trend and see if the positron fraction continues to rise at higher energies.  Because Fermi is in space, it has access to a different energy regime than ground-based instruments – the majority of gamma rays are blocked by Earth’s atmosphere, which is good for us as living beings but lousy for us as astronomers.  However, the Fermi team faced a major problem: LAT has no way of distinguishing between electrons and positrons.  Since electrons and positrons are each other’s antiparticle, they are completely identical except for their electrical charge.  The usual way to tell particles and antiparticles apart is to put them in a magnetic field; particles will curve one way, whereas antiparticles will curve the other, and the detectors can measure the curvature of their tracks as they pass through the telescope.  However, unlike PAMELA, LAT wasn’t built with such a magnetic field, and since it’s a space-based instrument there’s no way to add one.  But that didn’t stop the scientists concerned.  Instead they used a clever method that takes advantage of the Earth itself. 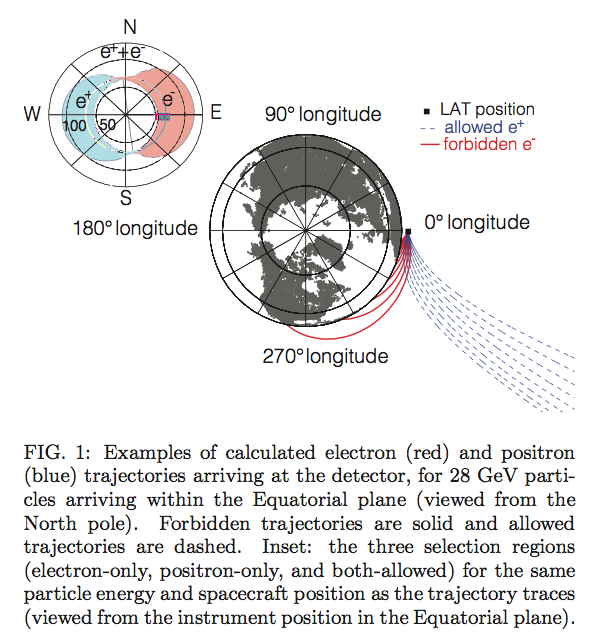 The Earth is big and thick enough to block all cosmic rays that hit it.  Since the telescope is in Earth orbit, it sees the Earth’s cosmic ray shadow as a horizon, and no particles can arrive from below it.  However, because the Earth has an intrinsic magnetic field, cosmic ray electrons and positrons that arrive from the same direction will start to deflect and curve away from each other as they near the planet.  This effectively splits the Earth’s shadow into two separate horizons, one for electrons and one for positrons, that are misaligned by a few degrees.  Therefore, if a particle comes from a direction above the positron “horizon,” but below the electron “horizon,” it must be a positron.  Similarly, 180 degrees away, particles can come from above the electron horizon but below the positron horizon.  There are certain directions that only electrons can come from and certain directions that only positrons can come from.  By choosing an energy range where the horizons are well-split and the telescope has very good direction resolution, and only counting events that appear to come from these regions in which only one type of particle is allowed, LAT can get a handle on the ratio of electrons to positrons. 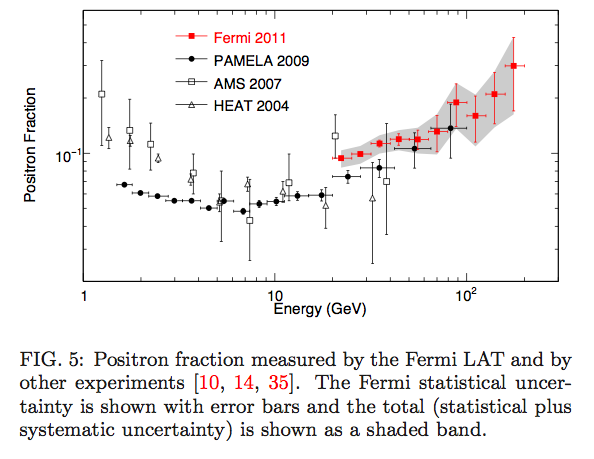 What the team found is both incredibly surprising and completely expected: the positron fraction continues to rise significantly at higher and higher energies.  This is expected, in that it matches well with the PAMELA data; but it’s very surprising, in that we still have no idea how or why this is happening.  The positron fraction is not only much higher than it should be at these energies, it’s rising, when the theory predicts it should be dropping.  There is a high-energy cosmic process happening somewhere in our galaxy (cosmic rays, despite the name, do not travel all that far) that preferentially creates and/or accelerates positrons over electrons, and we have no idea what it might be.  There are a few candidates, such as particular types of radioactive decays, but as with most things regarding cosmic rays, the vast majority of sources are unknown.  Some scientists think this might be a signal from dark matter, or from the so-called “hidden sector” of particles that some theories predict exist beyond the Standard Model.  Further experiments with Fermi, as well as with experiments like AMS-02 (another space-based detector experiment that can better distinguish different types of particles) are going to be needed to explain this mystery.

Cosmic rays on the sky – where do they come from?