A supermassive black hole is a kind of cosmic parasite that preys on galaxies. As the host galaxy grows larger, so too does the black hole, consuming gas that would otherwise be turned into stars. Worse, it guzzles gas so quickly that the gas surging down its gravity well gets superheated; the hot gas radiates strongly, heating up surrounding gas and driving it away from the black hole. This prevents it from being turned into stars, causing the galaxy to starve. This effect actually sets a limit on how fast a black hole can grow. To cap it off, it doesn’t always finish its meal, launching jets of material clear of the galaxy which expel yet more gas (there’s an obvious simile here, which I’m not going to employ for reasons of good taste).

Naturally, all this has a profound effect on the host galaxy and its stellar population, ultimately shutting down star formation. The bigger the galaxy, the bigger the black hole – and the more aggressive it gets. A negative feedback loop is created which causes those galaxies that grow quickest to also fail quickest, a kind of cosmic ‘boom and bust‘. This leads to a tight correlation between the mass of a galaxy’s supermassive black hole and its total mass (more precisely with its velocity dispersion, which is just a stand-in for galaxy mass).

In today’s paper, the authors search for clues as to how the presence of a supermassive black hole affected the formation of the stars that did make it before the gas supply was cut off.

We know that just as there is a connection between galaxy mass and black hole mass, so too is there a connection between galaxy mass and the chemical makeup of stars. The most massive galaxies are ‘alpha-enhanced’ – a term that, like most technical language, packs in a lot of detail. Alpha elements are common elements created by sticking together a bunch of alpha particles (Helium nuclei). Their atoms therefore have atomic masses divisible by four: Oxygen, Neon, Magnesium, Silicon, Sulphur, Argon, Calcium, and Titanium, in case you haven’t got a periodic table to hand.

(Carbon doesn’t count. It’s more like the seed to which you attach alpha particles in order to make the legitimate alpha elements. Making Carbon is hard, but once you’ve got some making alpha elements is easy. Sorry Carbon.)

There’s another class of elements called ‘iron peak’ elements. Heavier elements tend to be rarer but there’s an exception for elements with atomic numbers similar to iron. When a galaxy is alpha-enhanced, it means that the alpha elements are more abundant relative to the iron peak elements than they are, for example, in the Sun. When this happens it’s actually telling us something interesting about the history of that galaxy. All these elements are formed in stars and released back into the wild via supernova explosions, which come in two types. Core-collapse supernovae are what you’re probably most familiar with: in these a massive star runs out of fuel, can no longer support itself against its own gravity and so collapses … before rebounding in a huge explosion. The massive stars that end in these explosions don’t last long in cosmic terms, sometimes only a few million years. By contrast, other supernovae occur when a white dwarf star (the kind of thing our Sun will eventually turn into) grows above a critical mass, probably due to wrenching material away from another star or merging with another white dwarf. These supernovae almost exclusively make iron peak elements but can’t possibly occur until you actually have some white dwarfs. That means there is a delay of several billion years while you wait for stars like the Sun to reach the end of their lives.

This time delay is critical. If you grow a galaxy steadily, over billions of years, these late supernova start to go off. This seeds the galaxy with iron peak elements while it’s still making stars. If you grow your galaxy quickly, they still go off, but it’s too late: star formation is finished and those heavy elements sail off into the void. In either case the core-collapse supernovae go off quickly, so you make lots of alpha elements. In summary, alpha-enhancement means you formed your stars very quickly. It’s therefore significant that the most massive galaxies have massive black holes (which we think cut star formation off early on) and are also alpha-enhanced: the two effects are directly related.

In order to isolate the effect of the black hole, the authors look at the outliers – galaxies whose black holes are a bit more/less massive than expected given the size of the galaxy. This is shown in Figure 1. Their sample spans a wide range of masses and other galaxy properties, the idea being that the particular effect of the black hole can be isolated in this way. 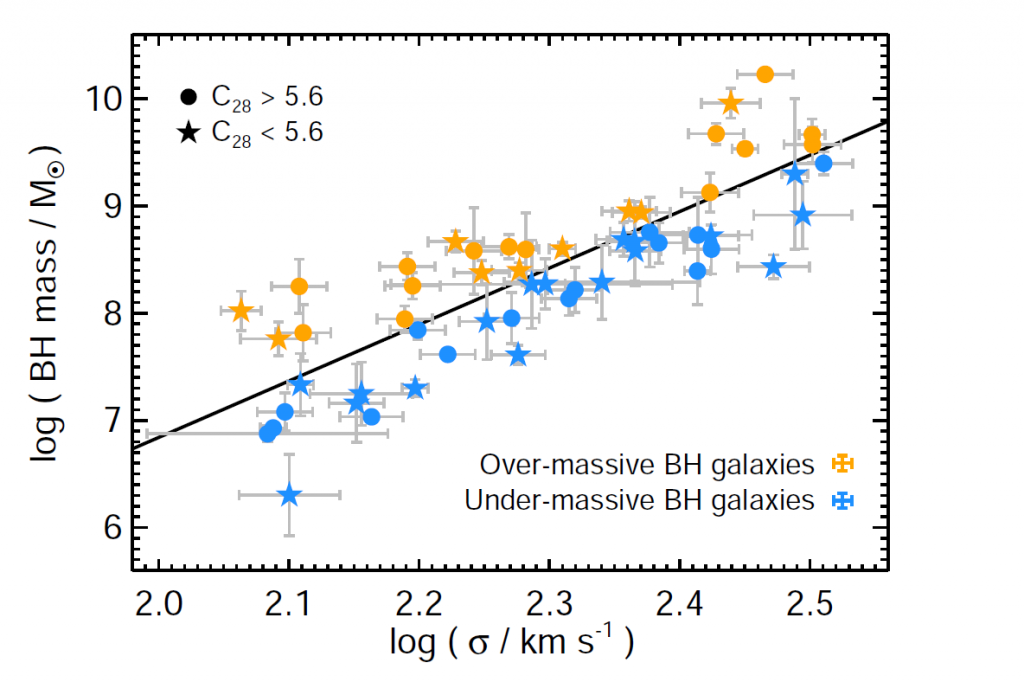 The authors’ sample of galaxies. The usual relationship between black hole mass and galaxy mass (velocity dispersion, on the x-axis, is just an indirect measurement of this) is plotted as a thick black line. Galaxies with slightly overweight central black holes are in orange, whilst those with comparatively light black holes are in blue (galaxies represented by circles are more compact than those represented by stars, but that’s not very important here). Figure 1 from the paper.

The authors find a clear correlation between underweight black holes and younger stellar populations, bearing out the idea that less massive central black holes are not so good at cutting off star formation. In the ‘blue’ galaxies in Fig. 1 black hole growth has lagged behind galaxy growth for some reason, which has meant those galaxies were able to form stars for longer. 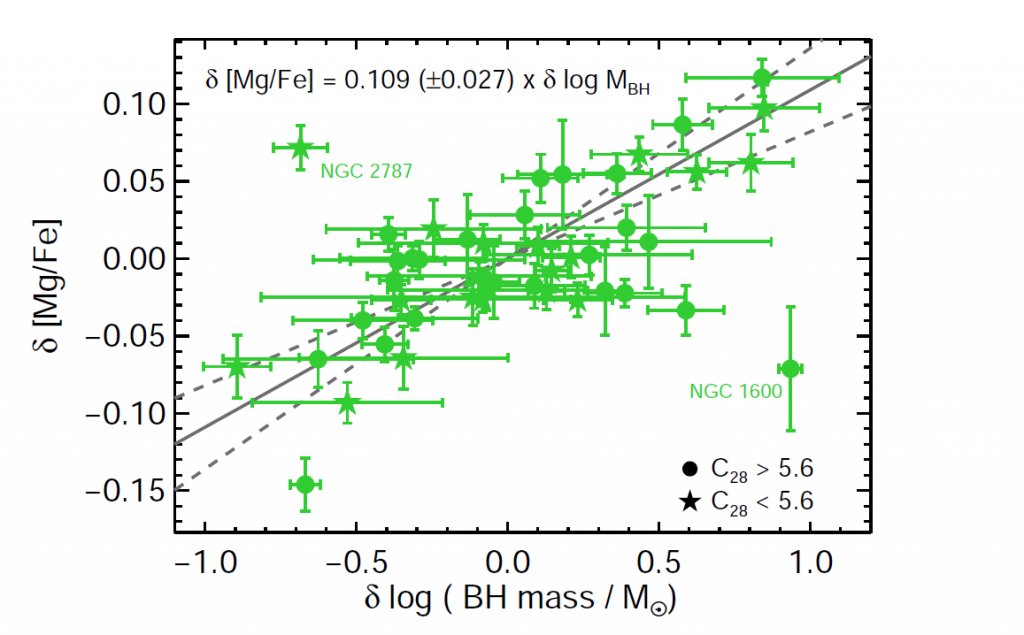 Both central black hole mass and the production of alpha elements (see text) such as Magnesium, Mg, are related to galaxy mass. Here we see there is a more fundamental, direct connection between the two: those galaxies with slightly more massive central black holes than expected are also slightly more abundant in Mg than expected (and vice versa). The axes show the excess black hole mass and excess Mg enhancement respectively. Figure 3 from the paper.

I said earlier that both central black hole mass and enhanced production of alpha elements are linked to total galaxy mass. What the authors are able to show is that there is a more fundamental direct link between the two (see Figure 2); this confirms that these correlations are no coincidence but really do arise from the theory I sketched out. The authors have shown us the direct effects of black hole feedback on the stellar populations of their host galaxies.

It’s a tough life for a small galaxy