Tying the knot with galaxy clustering

Nudged and poked by their neighbors through gravity, galaxies appear to be randomly scattered in space. Are they also, like our Milky Way, random droplets of milk from the Greek goddess Hera who refused to breastfeed baby Heracles? Modern astronomy has gone a long way to tell us that well first, the Greek mythology is likely not true, and second, there is another sly invisible player in the field, called dark matter, who single-handedly orchestrated how galaxies are distributed. We now know that galaxies form in the centers of overdense regions known as dark matter halos. Numerical simulations have various prescriptions to populate a dark matter halo with galaxies, but it is not clear if this accurately reflects reality, as we haven’t quite pinned down the complete galaxy formation and evolution recipe. Furthermore, the effect of dark matter halos on their galaxies remains in the dark. Astronomers have devised various ways to probe galaxy evolution and the dark matter-galaxy connection, one of which is galaxy clustering.

If you look hard enough up the night sky (as astronomers have done with their large telescopes and surveys), you will notice that actually galaxies are not that randomly positioned. Galaxies tend to cluster over some spatial scales dictated by the underlying dark matter potential, forming galaxy clusters (and superclusters, i.e. clusters of clusters). Astronomers have found that the brightest galaxies tend to be more clustered, as well as early-type/elliptical red galaxies (i.e. galaxies that no longer form stars and consist mostly of red giants and supergiants) at a given luminosity. Within blue and star-forming galaxies themselves, clustering is also found to increase as the star-forming galaxy becomes less star-forming, or redder. Galaxies with higher stellar mass also tend to cluster more, leading to the notion that perhaps we can track halo mass using stellar mass as a proxy. A common theme seems to emerge, and that is that galaxy clustering somehow depends on the star formation properties and stellar masses of galaxies.

In this paper, the authors study how galaxy clustering depends on both stellar mass and specific star formation rate sSFR (SFR divided by stellar mass) using a sample of over 100,000 galaxies between redshift of 0.2 and 1.2 from the PRIMUS and DEEP2 galaxy redshift surveys. The authors estimate the stellar masses and sSFR by applying stellar population synthesis models on multi-wavelength imaging of their galaxies spanning from the UV to the NIR. In order to probe clustering dependence on stellar mass and sSFR, the overall galaxy sample is divided into different groups, each referred to as a “run” in the paper, where each run is again divided in two redshift intervals, as shown and explained in figure 1.

To describe clustering beyond the qualitative sense, astronomers measure the excess probability of finding a pair of galaxies separated by a certain distance relative to a random unclustered population, known as the two-point correlation function (2PCF). From the 2PCF, one can then calculate the clustering bias, which is the ratio of the 2PCF of galaxies and dark matter halos. The authors calculate the 2PCF and biases of the galaxies in all four runs. In addition to recovering previous results where at a similar stellar mass, quiescent galaxies are more clustered than star-forming galaxies, clustering is also found to increase with increasing stellar mass and decreasing sSFR, as shown in figure 2. However, which one among the two is the dominant driver? Figure 3 sheds some light on this question. At a fixed stellar mass ratio (regions between the vertical dotted lines), the bias measurements vary significantly due to the varying sSFR, while the variations are not as huge at a fixed sSFR (regions between the horizontal dotted lines) despite the varying stellar mass ratios. Therefore, while higher stellar mass galaxies are indeed more clustered, this is not true at a given sSFR, suggesting that sSFR tracks clustering more strongly. 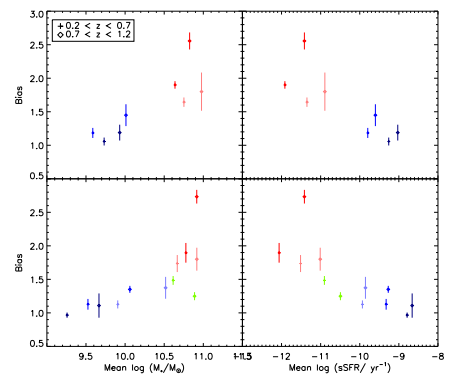 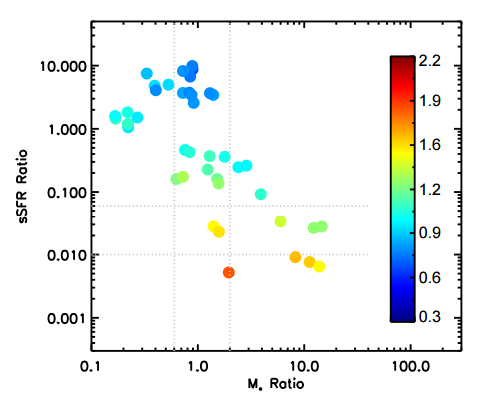 The road to unraveling the galaxy and dark matter connection looms far ahead still, as we need to understand better the dependence of clustering on various galaxy properties and the correlation of one property with another, which requires an accurate picture of galaxy evolution. This paper shows that clustering is in a (lopsided) love triangle between sSFR and stellar mass, depending more strongly on sSFR than stellar mass, thereby placing constraints on theoretical models of galaxy evolution.