Welcome to Day 2 of the joint 48th meeting of the Division for Planetary Sciences (DPS) and 11th European Planetary Science Congress (EPSC) in Pasadena, California! Two astrobiters are attending this conference, and we will report highlights from each day here. If you’d like to see more timely updates during the day, we encourage you to search the #DPSEPSC hashtag! 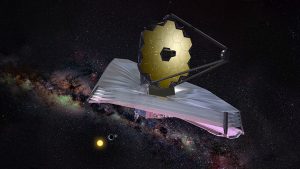 An artist’s illustration of the James Webb Space Telescope, a joint effort between NASA, the European Space Agency, and the Canadian Space Agency. A town hall today focused on how JWST can be used to observe the solar system. [NASA/JWST]

The James Webb Space Telescope, the upcoming infrared space telescope with an unprecedented 6.5-m mirror, is highly anticipated for the new view it will give us of the universe. But not all of JWST’s observations will be of distant stars and galaxies — the telescope is fully capable of making detections much closer to home.

Though JWST won’t be able to observe in the inner solar system, it will be able to examine planets, satellites, rings, asteroids, Kuiper belt objects, and comets located at the distance of Mars and outward. Here are just a few of the solar-system observations the planetary community has proposed that JWST will be well-suited to make. 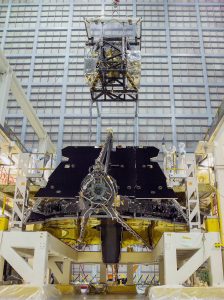 A nerve-wracking moment wherein JWST science instruments are lifted by crane above the mirror, and both are suspended face-down over the clean-room floor as the observatory is assembled. [NASA/Chris Gunn]

In today’s town hall, JWST Deputy Project Scientist for Planetary Science Stefanie Milam (NASA/GSFC) provided an overview of JWST, discussed how it could be used for planetary science, and gave us an update on the telescope’s status.

JWST’s progress is grouped into yearly themes: 2013’s was instrument integration, 2014’s was manufacturing of the spacecraft, 2015’s was assembly of the mirror, and 2016’s has been assembly of the observatory. At this point the mirrors and instruments are installed, and the assembly of JWST is nearing completion! 2017 will be a year of testing all the components of the telescope at the Johnson Space Center, in preparation for a 2018 launch.

Next up in the town hall, STScI Solar System Science Lead John Stansberry provided us with details of JWST’s observing modes and capabilities, and discussed what they mean for astronomers interested in proposing observing time on the telescope, particularly for planetary observations. Will Grundy (Lowell Observatory) then discussed the use of JWST for high-resolution imaging. Ultimately JWST will have roughly comparable angular resolution to Hubble, but in infrared wavelengths instead of optical. The depth and detail that this will provide should make for both spectacular images and exciting new science! 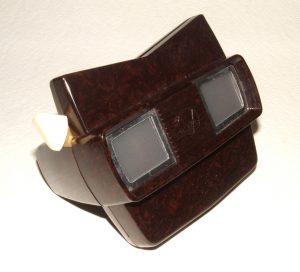 Finally, Joel Green (STScI) pitched an idea to use both JWST and Hubble for combined observations of the same targets. The two telescopes, which overlap in observing wavelength between 0.7–1.6 µm, are separated by a 1.5 million km baseline. This means that, when used together, they could produce stereoscopic images similar to the “magic eye” pictures many of us have spent hours staring at cross-eyed!

Why is this better than taking two images 6 months apart with the same telescope, making use of annual parallax to create a baseline? The advantage to using both JWST and Hubble together is simultaneity: if Hubble and JWST make their observations at the same time, we can create stereoscopic images of transient events. Potential cases where this is useful include comet/asteroid activity, cometary collisions, and cloud/storm features on giant planets.

Today’s press conference all centered around New Horizons’s mission results. Before the speakers began, New Horizons’s Principal Investigator, Alan Stern, said a few words. To give you an idea of what it has been like for the team, Dr. Stern said that during it all they “felt like doctors triaging patients.” The full press release can be found here.

One of the major goals of the New Horizons mission was to answer the question of how reflective Pluto really is and how exactly it scatters light. Dr. Bonnie Buratti was excited to show a map of the albedo (reflectivity) of Pluto. The map shows a region of very high (nearly perfect) reflectivity right in the middle of Sputnik Planitia, a large geological feature on Pluto. Dr. Buratti and her team were interested in knowing what, if any, other objects in the Solar System exhibit this same behavior. They found that the only other system with a similar large range in reflectivity was Iapetus, one of Saturn’s moons. They also looked at objects in the Kuiper belt and found one object, Eris, with regions with nearly perfect reflectivity. Dr. Buratti and her team are excited because they think this might mean Eris is geologically active, like Pluto.

Moving from the surface of Pluto to the atmosphere, Dr. Alan Stern continued to talk about the possibility of clouds on Pluto. Clouds are common across nearly all the planets in our Solar System: Venus, Earth, Mars, Jupiter, etc. The New Horizons team had previously announced that Pluto’s atmosphere was enveloped in haze layers. This detection posed a number of mysteries. The hazes appeared very high in the sky and the team is still unsure how they have formed. These hazes are only about 25% optically thick, however — which means that to date, clouds, which are much more optically thick, have not been detected. Today, Dr. Stern announced the detection of 7 possible small clouds lying very low near the surface of Pluto. All together, these 7 clouds take up less than 1% the surface area of Pluto, meaning that generally, Pluto is cloud-free. In the future, it will be interesting to understand what these potential clouds are made of, and if they aren’t clouds, what we are in fact seeing.

Straying away from Pluto all together, Dr. Ross Beyer, discussed the discovery of landslides on Pluto’s largest moon, Charon. This is peculiar because the New Horizons data shows that Pluto is void of any landslides. And as Dr. Stern discussed in his plenary talk yesterday, Charon is geologically inactive, as compared to Pluto. So why does Charon have these features, but not Pluto? In fact, these are the first landslides we’ve seen this far away from the Sun. We don’t know what material the landslides are made of or why they are forming without a dedicated orbiter. It will be very interesting for the team to see if they can detect these landslides anywhere else in the Kuiper Belt. 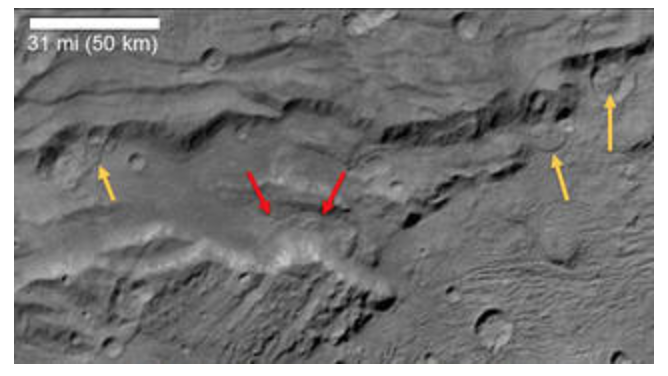 The last press release was given by Dr. Amanda Zangari, a post-doctoral researcher at Southwest Research Institute, who was filling in for Dr. Susan Benecchi. The New Horizons mission has completed its initial mission requirements and has already started preparing for its extended mission. During its extended mission, the main flyby target is 2014 MU69. This object was discovered by the Hubble Space Telescope and is located in what is called the “cold classical Kuiper Belt”. The cold classical Kuiper Belt is a very old primordial region where none of the objects are interacting with Neptune and all of the objects have very low inclinations. This leads scientists to think that 2014 MU69 is one of the ancient building blocks of the planets in our Solar System. One method of verifying this (before actually going there) is to measure the color of the object. Data from Hubble reveals that this object may in fact be part of the primordial region in the Kuiper Belt. Therefore, New Horizons will be heading there and on January 1, 2019 we will know for sure!