Welcome to Day 4 of the joint 48th meeting of the Division for Planetary Sciences (DPS) and 11th European Planetary Science Congress (EPSC) in Pasadena, California! Two astrobiters are attending this conference, and we will report highlights from each day here. If you’d like to see more timely updates during the day, we encourage you to search the #DPSEPSC hashtag! 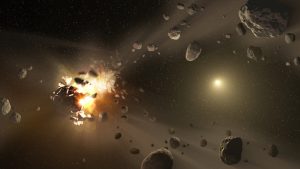 Artist’s illustration of how an asteroid family is created. Chaotic motion affects the orbits of such families of asteroids that form from catastrophic collisions. [NASA/JPL-Caltech]

Farinella Prize Lecture
Flavors of Chaos in the Asteroid Belt

This year’s Farinella Prize was awarded to Kleomenis Tsiganis (Aristotle University of Thessaloniki, Greece), for “timely and deep examples of applications of celestial mechanics to the natural bodies of the solar system”. Tsiganis is one of the developers of the Nice model, a model that describes the migration of Jupiter, Saturn, Uranus and Neptune during the early phases of the solar system’s evolution to their currently observed positions.

Tsiganis’s prize lecture described how we can combine our knowledge of chaotic dynamics with observations to understand several interesting features of the asteroid belt, such as mean-motion resonances of asteroids, or the behavior of asteroid families (produced when a collision disrupts a parent body into fragments).

This year’s Harold C. Urey Prize for outstanding achievement in planetary research by a young scientist was awarded to Leigh Fletcher (University of Leicester), in recognition of his ground-breaking research in understanding physical and chemical processes in the atmospheres of the outer planets. 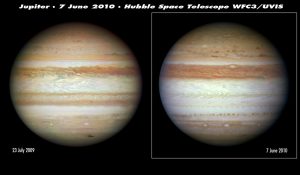 Jupiter’s prominent southern belt mysteriously vanished in 2010, before later reappearing. Ground-based observations revealed that a plume from deeper in the atmosphere may have been instrumental in reviving the belt. [ESA/Hubble]

Fletcher’s lecture provided an overview of the different cycles we’ve been able to study in the atmospheres of giant planets. These include:

An example: the clouding out of one of Jupiter’s most prominent belts. In 2010 we watched Jupiter’s South Equatorial Belt turn white as it was clouded out; a few months later the clouds dissipated and it returned to normal. High-resolution ground-based observations revealed a plume punching up from lower layers to deliver material high into Jupiter’s tropopause before the belt returned. This activity likely helped to clear up the clouds and revive the belt. 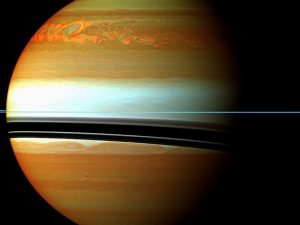 Stunning Cassini observations showing a false-color mosaic of a giant storm that raged on Saturn in 2010/2011. [NASA/JPL-Caltech/Space Science Institute]

Another example: Saturnian storms. Roughly once every Saturnian year, a large storm erupts on the planet. In 2010-2011, Cassini took some spectacular images of an enormous storm that briefly formed the largest non-polar vortex in the solar system! Observations from Cassini were used to understand how energy was transported through the atmosphere in this storm.

Fletcher concluded by discussing what’s next for giant-planet atmosphere studies. He expressed his fervent hope that a dedicated mission to our outer ice-giant planets — which haven’t been visited since Voyager 2’s flyby in the late 1980s — would be completed within the next half century. He argued that studying the atmospheres of Uranus and Neptune is important because they represent a missing link between giant planet atmospheres and smaller terrestrial atmospheres. Plus these planets have plenty of satellites, so a mission to the ice giants would be able to find many targets to make everybody happy!

Until then, we can look forward to continued discoveries with ground-based telescopes, upcoming observations with JWST, and future programs, like a return to Jupiter with JUICE and NASA’s Europa mission.

The Ancient Habitability of Gale Crater, Mars, after Four Years of Exploration by Curiosity

In the final plenary of the meeting, Ashwin Vasavada (Project Scientist for Curiosity, JPL) and Sanjeev Gupta (Imperial College London) gave a tag-team overview of what we’ve learned about the past habitability of Mars from observations by the Curiosity rover. 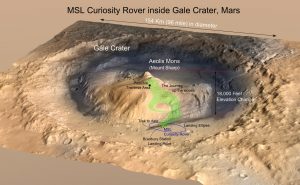 Context for Curiosity’s journey. The path it’s already traversed is shown in yellow. Green is where it’s headed. [NASA/JPL/T.Reyes]

Vasavada opened the talk by mentioning that Curiosity has recently drilled its 15th hole in the surface of Mars! When the rover drills samples from rocks, the resulting powder is analyzed by its CheMin instrument, allowing us to determine the exact mineral composition of the sample. This has revealed a lot of information about the terrain that Curiosity has been traveling through.

Vasavada took us on a tour of the first part of the rover’s journey within Gale crater as it has made its way to Mount Sharp. The crater is 150km wide, and the layers of rock around Mount Sharp likely contain a record spanning several hundred million years during a period of dramatic climate evolution in Mars’s early history. Almost immediately after landing, Curiosity was able to probe that history when it drove across an ancient streambed littered with rounded pebbles, providing unmistakable evidence that Mars once had flowing water on its surface.

Not long after that point, the rover arrived at Yellowknife Bay, where it took its first mineralogical samples and gathered data indicating that the region was likely an ancient lakebed. Curiosity’s observations suggest that ancient Mars was capable of supporting life: it appears to have had liquid water with a neutral pH and low salinity, key elements and nutrients necessary for life, and energy for metabolism.

Curiosity’s images of what was likely once an ancient lake bed on Mars. [NASA/JPL-Caltech/MSSS]

Gupta took over describing Curiosity’s ongoing journey to the base of Mount Sharp. The observations that Curiosity has made along the way have provided additional signs of past lakes and groundwater systems — not just at one point in Mars’s history, but in fact active hydrological cycles spanning millions to tens of millions of years! This suggests that habitable conditions may have existed on Mars for quite some time in the past.

Curiosity still has plenty of mission time and a long journey ahead of it, so it seems likely that we can count on many more revelations from this intrepid little rover.