Status: Accepted for Publication in A&A 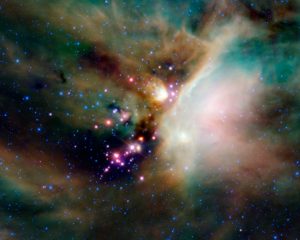 Figure 1: Young stellar objects located in the Rho Ophiuchi cloud complex. This image was created by NASA and is available from Wikimedia Commons.

Today’s paper is a study of a family of baby stars. For young stars, we can talk about their development mostly in terms of how much dust there is around the star. The early period of a star’s life — while it is still collapsing, before it joins the main sequence and begins hydrogen fusion — still has many questions around it. In particular, while we know that these young stars form with envelopes and discs of dust, we do not have good models for how long these features hang around or what properties of the star affect their lifetimes. The difficulty in measuring a star’s precise age makes putting timescales onto the evolutionary process difficult.

This is where today’s star system comes in. HBC 515 contains 5 young stars. All are the same age, but they are at different stages of development — which is to say, some are further through the process of losing their dust than others. This means that by comparing the stars themselves and the amount of dust they have around them, we can investigate what it is about a star that can speed up or slow down their development. Today’s paper, by Principe et al., presents new data on this system from two ends of the spectrum: X-ray data from Chandra and sub-millimetre data from the Sub-Millimetre Array. The team use this data to estimate how much dust there is around each star and suggest reasons for the differences they see.

The Stars: The Nested Binary HBC 515Aa and Ab 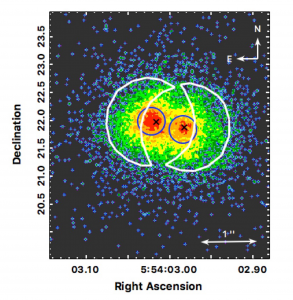 Figure 2: The T Tauri binary HBC 515Aa and Ab were quite blended in the X-ray data. The flux of each star was extrapolated from the crescent shapes, to avoid the areas contaminated by the other star. This is Fig. 2 from today’s paper.

The two most developed young stars in the system, which is to say the two that have lost the most of their circumstellar dust, are HBC 515Aa and HBC 515Ab. These are much closer to each other than any other star in the system and form a nested binary — they orbit each other while simultaneously being part of the larger star system. They are “T Tauri” stars, a type of star characterised by having variable brightness and showing emission lines from their atmosphere. T Tauri stars are still in the process of contracting. The gravitational energy released as they shrink is what powers them, as they are not yet hot enough at their cores to trigger hydrogen fusion. Our two are also strong emitters of X-rays. T Tauri stars are generally surrounded by a disc of matter; the emission lines we see in their spectra are evidence that the disc material is falling onto their surface.

In our two stars, 515Aa and Ab, the emission lines are relatively weak, implying that they don’t have much disc left. Since they are the same age as the rest of the system, there must be something special about these stars that have caused them to lose their discs faster than the rest of the system. There are two things that stand out as ways the stars could have lost some of their dust. Firstly, the stars’ X-ray emissions could have evaporated some of the dust. Secondly, being so close to each other, the gravity of each star could have helped to disrupt the disc of the other.

The next star in the system, HBC 515B, is at the opposite end of the scale — it is the most dusty star in the system. The star shows up particularly strongly in the sub-millimetre data, which is evidence for dust being heated by the star’s light and re-emitting the energy. By modelling this process, we can estimate how much dust is present. The mass of all the dust around 515B would come to 44 times the mass of Jupiter. For comparison, the mass of our Solar system (excluding the sun itself) is less than 1.5 times the mass of Jupiter — so that’s a lot of dust!

The next star, HBC 515C, is towards the less dusty end. A previous study found that this star had a smaller dust disc, which the sub-millimetre measurements support; there’s around 10 Jupiter masses of dust here, so a quarter of 515B’s amount, but it still has a lot to lose. The X-ray measurements show that 515C, like 515Aa and Ab, is a strong emitter of X-ray radiation. As with those stars, this X-ray emission could have evaporated some its dust, explaining how it ended up so much less dusty than its sibling 515B. On the other hand, it still has more circumstellar dust than 515Aa and Ab — evidence that the binary interaction of those two stars has been important to them losing dust as well.

Finally we come to poor HBC 515D, the furthest-out and faintest of these five stars. Probably this star is somewhere between 515B and 515C in terms of development, but today’s team weren’t able to say too much about it. In their sub-millimetre data the star isn’t visible, so they weren’t able to estimate how much dust it has, leaving the unlucky star left-out and unwanted.

Overall, the variety of stars in HBC 515 allows the team to study young stars and identify the processes — X-ray emission, gravity from nearby stars — that lead to their dust loss; an exciting prospect for this field!