Astronomy is observing the night sky. However, when you want to find out about the origin of the solar system, you may be surprised how much you can constrain the history of the solar system only by looking down on Earth. Let’s take the abundance of an element called Neodymium (Nd). Earlier measurements measured an excess in Nd-142 (an isotope of Neodymium with a mass of 142 atomic mass units) on Earth compared to the abundances measured in meteorites, while the abundances in other isotopes are similar on Earth and in meteorites that fell to Earth. A popular explanation was that the Nd-142 abundance in the Earth’s mantle increased due to a geological mechanism called planetary differentiation. As the name differentiation implies, it describes the process of separating components. Denser material sinks to the planet’s center, while less dense stuff rises to the mantle. In this manner, different compositions may occur on a planet, possibly leading to a relative excess in Nd-142 in Earth’ mantle, whereas small bodies such as meteorites cannot be affected by differentiation. If this was the explanation for the excess, one would also expect the existence of a complimentary reservoir that is depleted in Nd-142. So far, such a reservoir has never been found, and researchers refer to it as a ‘hidden reservoir’.

However, the authors of this paper claim that such a reservoir will never be found for a simple reason: It does not exist. They measured ratios of several different isotopes of Nd by using a mass spectrometer and with higher certainty than ever before. What they find is that the apparent excess in Nd-142 was induced by measuring uncertainties in previous measurements, and is in fact non-existent. Instead, the authors find that the ratios in Nd isotopes on Earth and in meteorites are very similar, when accounting for possible differences related to the formation of elements in stellar nucleosynthesis. Most heavy elements are produced by capturing neutrons, either in a slow process or in a rapid process. Therefore, they are labeled s- and r-process. Furthermore, a small fraction of elements were produced by capturing a proton, thus referred to as p-process. As the authors show, the isotopic ratios all fall on a line that is consistent with a s-deficit line, which means that the differences measured in the meteorites and on Earth are in fact only inherited from where they were produced a long time before the solar system started to form. When you look more carefully into the plots, you notice that the white square is far off the line. The authors explain this difference by looking at the content of this particular meteoritic sample in more detail. They point out that this meteorite (Allende) contains so-called Calcium-Aluminum-rich inclusions (CAIs) additional to the components present in the other meteorites. CAIs are interesting in themselves because they are the oldest material we know of in the solar system and they are believed having formed differently than the remaining meteoritic components. As you can see, the measured ratios in CAIs are far off the line (white and grey triangle). Taking the contribution of the CAIs into account, the authors can calculate what the abundance would be without the CAIs. By doing so, they find that the result (grey square) is also consistent with the s-process line, and thus Allende’s CAI-free components reveal a similar composition as Earth and the other meteorites used in this study. 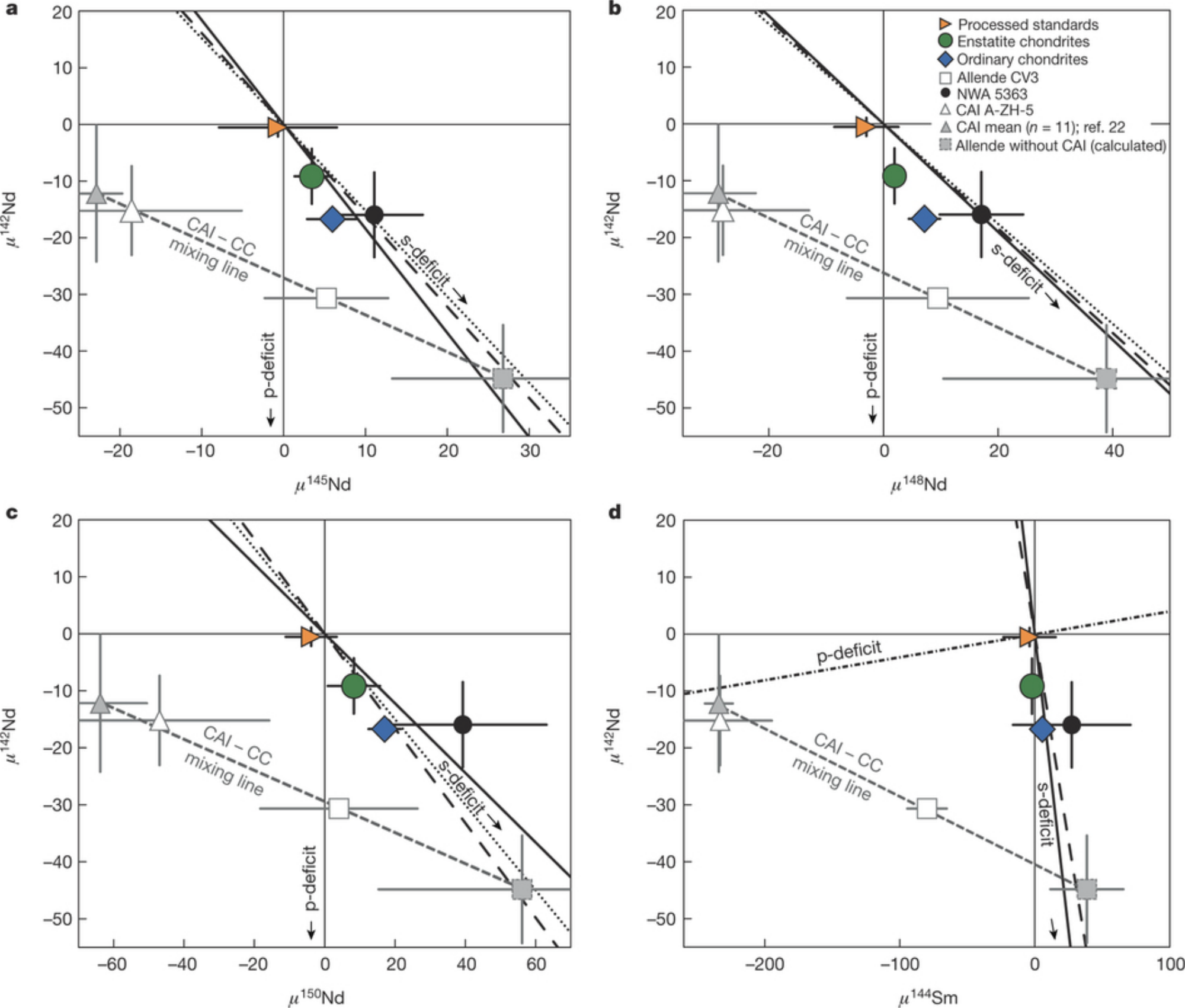 notation, which emphasizes the deviation from a reference value by multiplying it by 1 million. The definition can be found at the bottom of this astrobite.

The results have consequences for models of solar system formation. The fact that we do not need the event of global silicate differentiation, which must have occurred during the first 30 Myr after the formation of the Earth looses constraints. Especially, some people people believed that a heavy impact called the late heavy bombardment happened during this period and caused the loss of the hypothetical hidden Nd-142-depleted reservoir. Although the current result does not rule out the existence of a heavy bombardment, it looses the constraints on when it happened – if it happened. Finally, it remains exciting to find out about the origin of the measured s-deficit. Considering that the meteoritic components were formed in the early protoplanetary disk, the different ratios may either reflect differences in space or in time. Possibly, the ratios were different at various locations in the early solar system, or alternatively the various ratios reflect differences in time induced either by processes within the solar system or by contaminations from the surrounding interstellar medium.