Spiral galaxies spin in captivating, celestial displays—a subtle showcase of the conservation of angular momentum.  The speeds of the gas and stars within tell yet another story.  Most stars in a spiral live in a central “bulge,” which dictates that the stars and gas within the surrounding disk orbit the bulge ever more slowly the further they are from the center of the galaxy.  But what we’ve observed is that no matter their distance, the stars and gas appear to orbit at the same—if not increasing—velocity away from bulge.  This implies that spiral galaxies must be tiny gems embedded in a vast ball of invisible, or “dark,” matter.   The presence of overwhelming amounts of dark matter in the universe was later confirmed by merging galaxy clusters, and the idea that giant unseen spheres of matter, what we now call “dark matter halos,” encapsulate all galaxies became an everyday fact.

Dark matter in its most simplistic rendition, cold dark matter (CDM), is a subatomic particle that only obeys the force of gravity (unlike the more familiar baryonic matter we’re made out of, which obeys four fundamental forces).  CDM has had remarkable success in explaining observations across cosmic time and across cosmic scales, but has met problems at the scales of galaxies and smaller, what astronomers call the “small scale” problems of CDM.  Galaxies often have constant density “cores” rather than steeply rising, or “cuspy” densities in their central parts.  The Milky Way has too few satellite galaxies, and they aren’t as massive as CDM predicted they’d be.

But can SIDM explain the velocities of stars and gas in spiral galaxies—the first clue as to the existence of dark matter?  Rotation curves, the velocity profile of a spiral galaxy, are typically flat or increasing with SIDM as with CDM (see top panel of Fig. 1).  However, galaxies with halos of the same mass can have rotation curves that look very different.  Some are incredibly flat—pointing to SIDM-like constant density cores—while others rise more steeply, as in CDM.  The authors of today’s paper set out to determine how this diversity can be produced with SIDM. 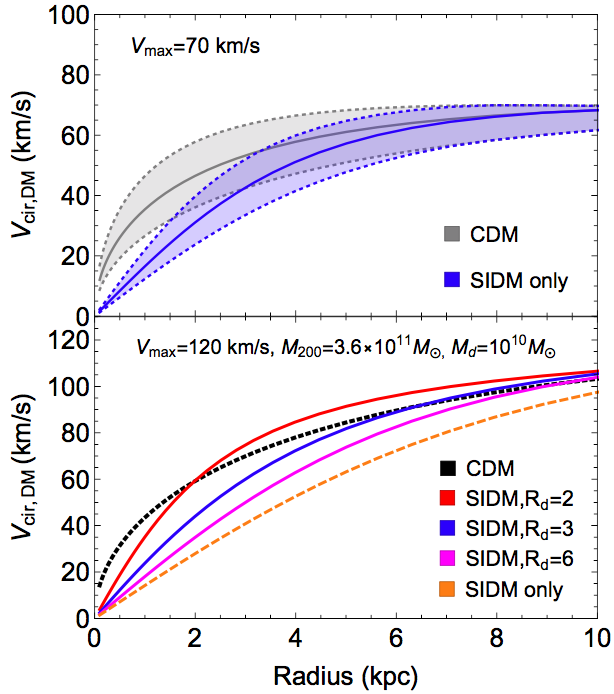 The authors look into two natural ways to produce diversity.  Halos form by merging with and accreting other halos, and differences between halos’ formation histories manifest as differences in how centrally concentrated the halos end up being.  More concentrated halos cause the rotation curves of galaxies to become steeper.  The authors find that including the observed variation in concentration can account for some, but not all, of the range in rotation curves.

Which brings us back to a matter of a more familiar sort:  baryons.  Baryons, the stars and gas that make up a large part of the disk and bulge of a galaxy, dominate in the central parts of some galaxies more than others.  This further increases the central concentration of the total matter (dark + baryonic), which allows rotation curves to be even steeper, increasing the range of curves permissible by SIDM to ranges that have been observed (see bottom panel of Fig. 1).

Figure 2. Fits to the observed rotation profiles of two galaxies with SIDM and baryons.  The observed profile is shown in black, while the fit is shown in red.  The contributions from gas and stars in pink, and the SIDM halo in blue (solid).  While both galaxies asymptote to the same velocity at large radii, NGC 6503 (left) sharply rises, becoming flat at ~5 kpc, while UGC 128 (right) increases only slowly, becoming flat at ~20 kpc.  The dashed blue line denotes the contribution CDM would have had, and the blue asterisks denote the contribution SIDM would have had without baryons.

This is an important piece of work that demonstrates that SIDM may be able to reproduce many of the small scale observations of the universe.  Further work awaits to determine if more detailed modeling that includes, for instance, not just the mass of the baryons but also their physics—heating and feedback from supernovae and winds, among others—can change their ability to explain the curves.