The identity of dark matter, the mysterious photon-adverse substance that makes up about 85% of the matter in the universe, remains one of the biggest open questions in astrophysics.  The vast body of astrophysical knowledge we have today was built upon the backs of photons that traveled from faraway galaxies, exploding stars, the bright beginnings of the universe, emitted by the normal or “baryonic” matter that you and I and all the things of our everyday lives are made out of.  Dark matter, by definition, does not emit light—we only know that it exists from the gravitational influence it exerts on the things we can see—which makes it difficult to study.  In the absence of detailed knowledge about dark matter, the de facto assumption on which astronomers operate is that it is cold (non-relativistic during the early universe), also called CDM for short.  But it’s possible, in fact, that a rich, fascinating, yet hidden world of dark matter exists.  After all, the familiar “baryonic sector” is composed of a diverse array of particles from quarks, leptons, to bosons, and obeys the four different fundamental forces, the gravitational, weak, electromagnetic, and strong forces.  Could dark matter also be made up of a variety of particles?  Are there many “dark forces” that act only on dark matter particles?

Shedding Light on the Dark Sector

Probing this “hidden sector” physics is difficult, but given that dark matter makes up most of the matter in the universe and thus strongly influenced the formation and arrangement of galaxies—the “structure” of the universe—certain assumptions about the dark matter particle(s) can leave fingerprints all throughout the observable universe.  The authors of today’s paper are in the midst of a project in which they attempt to trace how different hypothesized dark matter particle properties affect the visible universe, a model they call an “effective theory of structure formation” (ETHOS). In a separate paper, they detail the mathematics connecting particle properties and observables, and in today’s paper, showcase how this works for a particular subclass of dark matter particles that combines key aspects of popular dark matter candidates.  In this class of particles, dark matter particles are massive and can interact with two other types of particles: one that’s massless (akin to photons, and thus dubbed “dark radiation,” or DR for short), and one that’s very massive and has the special property of being a “force carrier” (much like how photons “mediate” the electromagnetic force and gluons mediate the strong force).

This set of properties leads to two interesting and important observable consequences.  Early in the history of the universe and before the first galaxies, when matter was roughly uniformly distributed, gravity initiated the growth of patches of matter that were hotter and denser (eventually becoming the dark matter halos in which galaxies form). Light or massless particles such as photons or dark radiation, less affected by gravity, diffused out from the hot, growing clumps, and thus could heat the underdense patches and counter the work of gravity. This tug-of-war between the relativistic particles and gravity results in a minimum halo mass—halos below this threshold are smoothed out by the relativistic particles.  The second observable consequence stems from the assumption that the dark matter particle interacts with a massive force-mediating particle. A massive mediator implies that particles moving more slowly relative to other dark matter particles are more likely to interact with other dark matter particles.  These “self-interactions” effect changes in the innermost regions of the halos themselves, producing constant density cores instead of the CDM-predicted “cuspy” centers in which their density sharply increases. 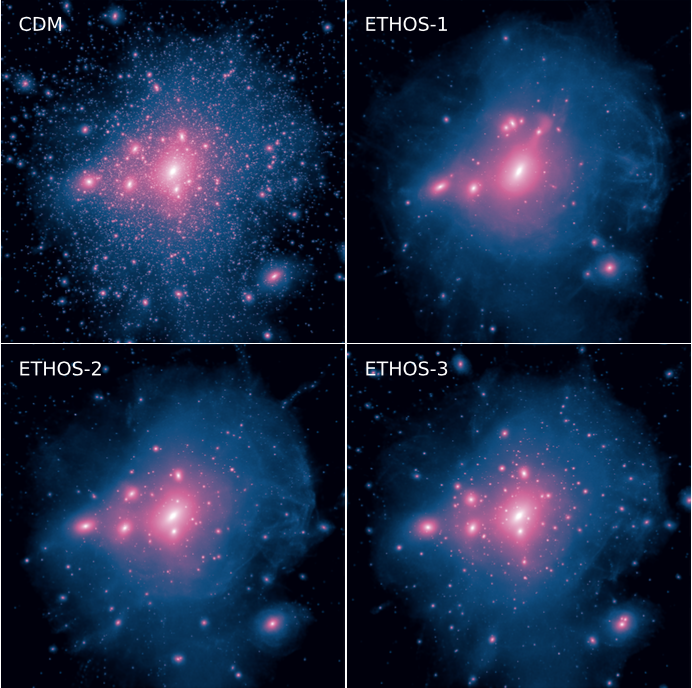 Figure 2. The reduction of satellite halos around a Milky Way-like halo.  Shown are density maps (pink = high density) of a high-resolution simulation of a Milky Way-mass halo for the four different dark matter ETHOS models the authors considered.  The ETHOS models assume that dark matter interacts with a massless “dark radiation” particle, smoothing out the smallest density fluctuations in the early universe and causing fewer low mass halos from forming.  The lower-numbered ETHOS models assume that more of the smallest fluctuations have been smoothed out, which results in fewer dwarf galaxies in the present day universe.  These ETHOS models can solve one long-standing issue with CDM, the missing satellites problem.  Figure taken from today’s paper.

From Theory to Observations: Simulations on the (cosmological) small scale

The authors chose to investigate these effects in the sort of halo we best know and love—one with a mass similar to the halo the Milky Way resides in, a realm which cosmologists consider to be “small” scales and in which CDM has trouble explaining what we’ve observed. They find that they can readily produce MW-like halos with drastically fewer satellites than those without, solving the missing satellites problem (see Figure 1; see this astrobite for more on missing satellites).  They can also readily produce halos with the right mass (skirting the too big to fail problem) with constant density cores instead of “cuspy” centers in which the density sharply increases, solving the cusp-core problem, another long standing issue with CDM. However, they find that in order for all three small scale CDM problems to be solved, however, their models must be tuned, which narrows down the number of viable dark matter candidates.

We’re still a long ways from pinpointing what dark matter’s made out of, but the authors of today’s paper have made a significant step forward in helping us wade through the vast sea of dark matter particle candidates.  Stay tuned as we continue to probe the physics of dark matter!