Title: Relativistic boost as the cause of periodicity in a massive black-hole binary candidate

In the center of almost every galaxy lives a Supermassive Black Hole (SMBH), i.e. a BH with mass a million to a billion times the mass of our Sun. Throughout the history of the universe, galaxies collide with each other and form new, bigger galaxies. Naturally, the newly formed galaxy will contain two SMBHs in its center, orbiting around each other, i.e. a Supermassive Black Hole Binary (SMBHB) is formed.

Such systems should be fairly common in galactic nuclei as a result of frequent galaxy mergers. However, we rarely observe them and there is a good reason for this. SMBHBs may spend a large fraction of their lifetime (about ten million years) in very close proximity, with orbital separation less than 1 pc (parsec is a typical distance unit in astronomy, equivalent to 3.26 lightyears). Currently, our telescopes do not have the resolution to detect the individual BHs.

Despite this limitation, we can infer the existence of a SMBHB by identifying the effects of a binary in its environment. One such (indirect) method is to detect periodic changes in the brightness/variability of quasars. This method relies on two assumptions: (1) quasars are thought to be triggered by galaxy mergers, so they may harbor SMBHBs and (2) when we simulate SMBHBs surrounded by gas (which sits in a “circumbinary” disk), as the BHs orbit around each other, they perturb the disk periodically. This leads to periodic infall of gas onto the BHs, which can be translated to periodic changes in the brightness of the binary (e.g., see D’ Orazio et al. 2013).

PG1302-102 was the first discovery of a quasar with periodic variability (over 100 such discoveries followed during the past year). It has a period of 5.2 yr and a mass of ~10^9 solar masses. If the observed periodicity is the orbital period of the binary, with simple Newtonian physics, we can calculate that the BHs are separated by 0.01 pc.

The authors of this paper came up with an interesting explanation for the periodicity of this quasar. They suggested that this binary doesn’t have to be fed periodically. In fact, periodic accretion of gas would likely lead to a “bursty” periodic light curve, whereas the one observed in PG1302-102 is smooth and sinusoidal.

The authors calculated (again with simple Newtonian physics) that the BHs should orbit with velocities ~5% the speed of light. When objects move with relativistic speeds, special relativity can cause interesting effects. For instance, the brightness of the most luminous source (typically the less massive BH in a binary) will appear brighter when it is moving towards us, and dimmer when it’s moving away from us, even if the brightness is constant at the rest-frame of the BHs (relativistic Doppler boost). If the optical emission arises from gas bound to each BHs, and the quasar hosts a unequal mass binary (e.g., if the lighter BH has mass ~5% that of the more massive one), then the Doppler effect should dominate the observed brightness. The authors suggested that Doppler boost can explain the optical periodicity and were able to successfully fit the observed data with the Doppler model. Figure 1 shows the light curve of PG1302-102, with grey points corresponding to the optical observations, while the black solid curve shows the best-fit Doppler model.

The Doppler effect will also be imprinted in the variability of the source in other wavelengths, e.g., in the ultraviolet (UV). Just as in optical frequencies, the UV emission also arises from gas bound to the BHs. According to the model, the UV light curve should track the optical, but with amplitude two to three times larger than that of the optical light curve. The relative amplitudes are defined by the ratio of the spectral slopes in the different bands. The authors assumed that the optical and UV continuum of the spectra can be approximated by a simple power-law and measured the UV slope from spectra taken by the Hubble Space Telescope (HST) and the optical slope from a historic spectrum taken in the 1990s, which was presented in the discovery paper. Several photometric observations are available from HST and the Galaxy Evolution Explorer (GALEX) and they were able to confirm that the UV light curve matches the prediction from the Doppler boost model. The near-UV and far-UV observations are shown in Figure 1 with red and blue points, respectively, along with the best-fit Doppler curves, with amplitudes 2.17 and 2.57 times the optical amplitude. The authors noted that since the UV light curve is somewhat sparse, additional follow-up observations are necessary to robustly test the Doppler model. 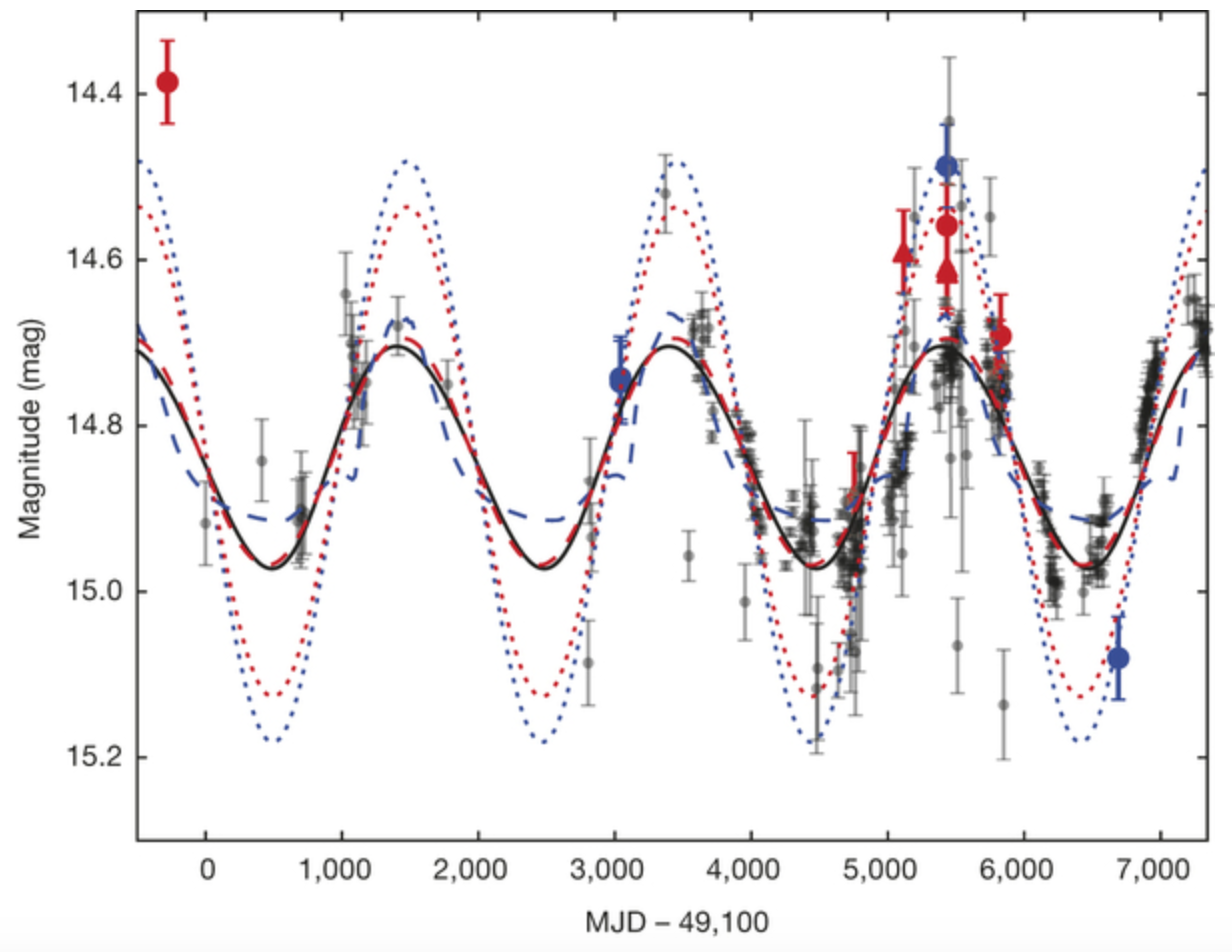 Figure 1: Optical and UV light curve of PG1302-102. The optical observations are shown with grey, the near-UV with red and the far-UV with blue points. The solid black curve, the dotted red curve, and dotted blue curve show the best fit Doppler curves in optical, near-UV and far-UV respectively. Figure 2 in the paper.

Compact (sub-parsec) SMBHBs, which are expected to be strong sources of gravitational radiation, should form frequently following galactic mergers. Despite their expected ubiquity, observational evidence for such sources remains sparse. Recently, a periodic quasar was identified and interpreted as a SMBHB candidate. This paper found evidence for relativistic Doppler boost from the analysis of the optical and UV light curves of the quasar. This effect is caused by the orbital motion of the BHs in a SMBHB and is generally not expected if the quasar hosts a single SMBH. Therefore, it provides strong evidence for the binary nature of the quasar.

I am a graduate student at Columbia University. I am interested in supermassive black hole binaries, gravitational waves and time domain astrophysics. In my free time, I enjoy exploring New York, biking and building tiny architectural models.

Catching Galaxies in the Act: A Confirmed Dual AGN