Status: Accepted to MNRAS Letters [open access on the arXiv]

Since the first direct detection of  gravitational waves in 2015, there’s been a large focus on the gravitational waves produced by binary systems due to their loudness and characteristic signature. Most of this attention has focused on binary systems composed of compact objects like black holes, neutron stars and white dwarfs as these are naturally the loudest events, the only binaries we know to exist in the frequency bands of ground-based interferometers…and compact objects are really cool. However, the coming space-based interferometer LISA will open up an entirely new frequency band for gravitational wave detection, and with it new progenitor systems to probe. Previous Astrobites have focused on some of these systems, such as supermassive black hole binaries, neutron star-white dwarf binaries, and even galactic binaries like AM Canum Venaticorum-type systems. However all these systems are still composed of compact and stellar, or larger, sized objects. Today’s paper takes a close look at a very different kind of binary system, an ultra-short period exoplanet, and shows that some of them should produce detectable gravitational wave signatures.

Thousands of exoplanets have been discovered to date, the vast majority within the past twenty years. In comparison with more massive and compact systems composed of black holes and neutron stars, the intrinsic gravitational wave luminosity of exoplanet systems is quite weak, but for select systems that are close to Earth their proximity can make up for the relatively weak signal and can be loud enough to be detected above the gravitational wave background. In order for such exoplanet systems to be detectable in the frequency range of space-based interferometers they must have extremely short periods of order an hour or less, and to be loud enough the planet has to be quite large.

The authors of today’s paper identified three known exoplanet systems whose characteristics fit these criteria: V396 Hya b, J1433b and GP Com b. All three exoplanet systems are within 230 parsecs, have periods of approximately one hour, and the planets have masses ranging from 18-57 times the mass of Jupiter. The authors demonstrate that the gravitational radiation produced by these three systems is detectable by both direct and indirect means. Following the example of the classic measurement of the decreasing orbital period of the Hulse-Taylor binary,  one can track the energy being carried away from the system by gravitational waves, as shown in Figure 1 below. The authors claim that indirect measurements of the gravitational radiation can be performed with currently existing instrumentation and techniques similar to those used for pulsars and white-dwarf binaries.

However, with the launch of LISA (currently scheduled for the early 2030s) these exoplanet systems may be directly detectable via their gravitational radiation. Figure 2 below shows that the three best candidate exoplanet systems will all produce a strain in the LISA interferometer that lies above the projected LISA sensitivity curve, and are thus detectable in principle. 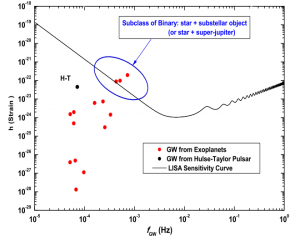 Figure 2: Strain vs. frequency showing projected LISA sensitivity curve. The three exoplanet systems above the curve may be detectable by LISA. (Figure 2 in the paper)

These results make it clear that ultra-short period exoplanets should be treated seriously as gravitational wave emitters that will be directly detectable with the next generation of instrumentation. The authors suggest that the main ways to detect exoplanets at present: transits, radial velocity measurements, and microlensing, which all have significant limitations, could be supplemented by the discovery of new ultra-short period exoplanets via direct detection of their gravitational radiation.