So in today’s paper, we’re looking at a planet discovery. The planet in question is called OGLE-2012-BLG-0950Lb. That’s a bit of a mouthful, so for the purposes of this article I’m going to nickname it Oggy.

Oggy is an unusual planet. It’s intrinsically fairly normal: a planet roughly the size of Neptune, orbiting an M-dwarf star. But Oggy is 3 kiloparsecs, or 9,800 light years, away, making it one of the most distant planets ever discovered. That’s because it was discovered via the microlensing technique.

Microlensing is a bit of a forgotten relative of observational exoplanet science – we hear about transit and radial velocity planets all the time, and direct imaging is intuitively simple and makes pretty pictures, and so gets lots of press time too. The microlensing technique, meanwhile, has been quietly churning out planet detections since 2004. And yet, if you asked your average exoplanet scientist how microlensing works, they’d probably panic and mutter something about general relativity before running away as soon as possible.

Microlensing works like this: your system consists of a lens star, which magnifies light from a source star. The source star is moving relative to the lens, and the closer it gets to the lens, the more the light rays are bent, and the more the lens magnifies the source. One could plot contours of equal magnification – they would be circles, traced around the lens star, as I’ve tried to demonstrate in Figure 1. The closer to the lens, the more a source would be magnified. The background source will move across the diagram following the red arrow, and as the flux increases and then decreases a flux peak is observed. 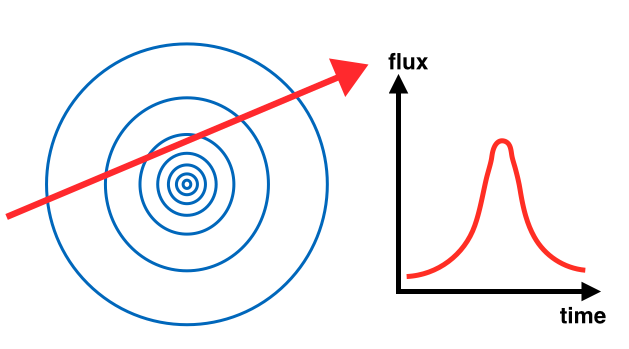 Figure 1: On the left, the blue contours show regions of equal magnification – increasing towards the centre where the star is positioned. On the right is the sort of flux curve you’d observe as the source passes behind the lens, following the red arrow.

Now, if the lens star also has a planet, this can warp the light rays even more. In fact, the interference between the two gravitational sources can even create places where the magnification of the source is infinite. Alternatively, depending on the system geometry, it can reduce the magnification of the lens for a very short time. As the source moves across the sky, there’s an added peak or trough, on top of the peak from the lens magnifying the source. Figure 2 shows a schematic of this setup. 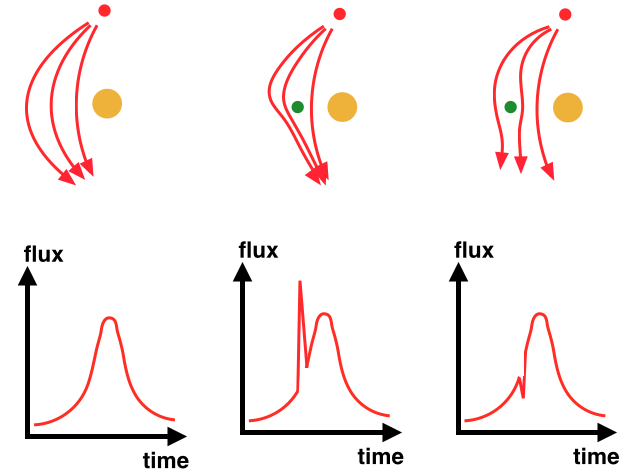 Figure 2: Three lens diagrams for the three possible scenarios. Left: a source is magnified by a lens star. Centre and right: the lens star now hosts a planet, which also warps the light: either enhancing or reducing the lens effect for a short period of time, and creating an additional bump or dip on top of the lensing curve.

Applying this to Oggy:

During the summer of 2012, two different microlensing surveys – one called OGLE and one called MOA – both independently identified a flux ramp-up around the same star. A source was just beginning its journey behind a lens. They monitored the event, and I’ve shown their data in Figure 3. This matches the situation in figure two: there’s a wide peak as the source passes behind the star, and a teensy dip at day 6149, where the planet briefly dims the source – a zoom-in of this dip is shown in the bottom panel. 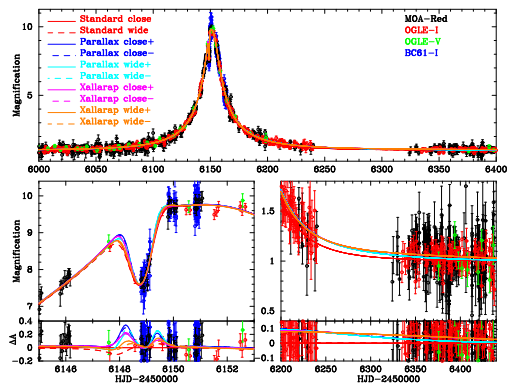 All of these data can be fitted to gain an understanding of the lens and planet system, and work out what’s actually been seen by the team. However, there are a lot of free parameters in the system, and only a few free parameters for your curve, so the fit is degenerate. In other words, the curve isn’t enough to constrain all the parameters, and there are multiple different good fits. There are various ways to solve this problem: for example, the length of time that the source is magnified for might tell you about the source diameter (since it will be magnified for slightly longer if it is slightly bigger). However, in the case of Oggy, the source size is consistent with zero – so the errors are too big for the magnification duration to give us any information.

However, the total passage of the star is a fairly long event, with the star being magnified for a total of ~120 days. This means that the orbital motion of the Earth during the microlensing event is actually detectable! The models that include the so-called ‘microlens parallax’ are shown in Figure 3, and fit better than those that ignore the Earth’s motion. For completeness, the authors also use a third model, one they call the xallarap model, where the orbital motion of the lens is considered (kinda like a backwards parallax – gettit?). However, this is found to be a less good fit than the parallax model.

By determining the microlens parallax, and with some additional Keck telescope observations that confirm the flux of the lens star, the authors calculate a mass for the planet and for the star. It’s 35 times the mass of the Earth, orbiting an M-dwarf host star, with a projected distance of three times the Earth-Sun distance. Oggy is the first planet for which a mass has been determined with just the parallax and the lens flux.

So, why should you care?

Microlensing is exciting as it’s the only method that can find these extremely far away planets. This allows us to figure out whether our part of the galaxy is representative: does the galactic bulge have as many planets as we do out here in a spiral arm? Are the planets in the galactic bulge generally bigger or smaller than ours? For now, microlensing is the only technique that can answer this question.

Since several microlensing surveys are now being carried out with simultaneous ground and space observations (using the Spitzer and Kepler telescopes), there will be more and more planets identified where the microlens parallax can be very precisely determined – so the method used here will be valuable in calculating masses for these future discoveries. Oggy is a great benchmark, proving that these missions will give valuable scientific output.