Title: Towards a Galactic Distribution of Planets. I: Methodology & Planet Sensitivities of the 2015 High-Cadence Spitzer Microlens Sample

I don’t know if you’ve heard, but astronomers have found quite a few exoplanets in the last couple of decades. However, most of these are clustered in our tiny corner of the galaxy. For the 2043 planets with stellar distance listed on exoplanets.org today (yes, I know this article will be out of date in a week…) the average distance of the host star is 624pc. The center of the galaxy, meanwhile, is ~8000pc away. That’s further than even the furthest known exoplanet, OGLE-05-390L b, which is 6500pc from us.

And we’d really like to have a better understanding of the exoplanets in the galactic bulge, because their presence – or lack thereof – helps us to understand planet formation. Planet formation is believed to be affected by several external factors such as the host star’s metallicity, the stellar mass, the stellar multiplicity, and the stellar environment. That final category is what we’re going to consider today: does the presence of a large number of nearby stars interrupt the formation of planets? The galactic bulge, as the part of the galaxy with the highest number density of stars, is an ideal place to test this – if only we could detect enough planets out there…

Any readers particularly clued-up on exoplanet surveys might have recognised the phrase ‘OGLE’ in the name of planet ‘OGLE-05-390L b’. OGLE is the “Optical Gravitational Lensing Experiment“, a microlensing project run by Warsaw university. Although the mission was initially designed for dark matter surveys, it has also made several serendipitous exoplanet discoveries. This astrobite describes microlensing for exoplanet detection in more detail, but for today all we really need to know is that sometimes nearby stars and distant stars happen to be really well aligned on the sky for a short time. In these cases, the nearby star’s gravity bends the light from the far away star, causing it to be brighter for a short time: this is the process we call microlensing. If the nearby star also has a planet, which is also well aligned with the distant star, then the gravitational influence of the planet plus star system causes the brightness of the microlensing event to vary in a particular way. The planet/star mass ratio can be inferred from the precise shape of that brightness plot. This is, of course, the same physics that produces the stunning, strong-lensing Einstein Rings – but with a slightly weaker requirement for close alignment.

Unlike the radial velocity, transit or direct imaging methods for exoplanet hunting, the microlensing technique is able to detect exoplanets at huge distances. Meanwhile, a field with physically more stars is a great place for microlensing experiments, since a large number of stars need to be monitored for a long time so as to catch some of these chance alignments of foreground and background stars. As such, OGLE has been staring at the center of the galaxy for over a decade. 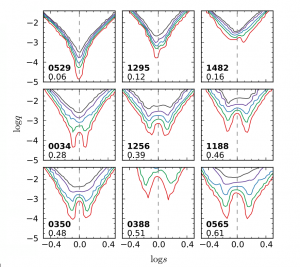 Figure 1: Sensitivities to planets for a subset of the survey. Red, Green, Blue, Purple and Black curves show the depth to which 15, 30, 45, 60 and 75% of planets could be detected. q and s represent the mass ratio and projected separation of the planets. The bottom left corner lists the OGLE catalog number (bold) and the impact parameter, which represents the closest on-sky separation of the two stars during the entire event. Adapted from Figure 13 in the paper.

Today’s authors carry out a pilot study laying out the methodology for a microlensing survey of how the galactic bulge affects planet formation. After data validation, removal of instrumental systematics, and a check that the distance to each star is well defined, the authors use a sample of 41 microlensing events – all of which have been observed by OGLE, Spitzer and a third telescope, namely KMTNet. Each of these microlensing events consists of a distant and a nearby star – and in this case no planets are detected around the nearby stars.

The authors model each of the lensing events with a variety of planets orbiting the nearby star, so as to figure out how sensitive the survey is to exoplanets, as a function of mass and separation. Some of these sensitivity curves are shown in Figure 2 above. They then carry out a statistical analysis: for this they use a simple parametrised model of the galaxy as a bulge and a disk, a couple of different assumptions about the stellar mass function, the footprint of survey on the sky, some beastly Bayes calculations and information about their survey’s sensitivity to planets.

On the assumption that planetary frequency is the same in the galactic bulge, the authors find that roughly a third of all planetary detections in a survey like this one should come from bulge events. Since they have no planet detections in this sample, they aren’t yet able to calculate what fraction of detections actually come from the galactic bulge – this is left as future work. If the number turns out to be significantly different from the value of one third calculated here, it will reveal crucial information about planet formation in crowded regions of the galaxy. This work is currently ongoing. And, if they get lucky, maybe OGLE-05-390L b’s record as most-distant-planet will soon be broken!