How do M-dwarf Stars Measure Up?

What’s faint, red, and all over? M-dwarfs, of course! These cool, low-mass stars litter our galaxy, and an M-dwarf star’s lifetime is longer than the Universe is old. But despite their strength in numbers and their longevity, M-dwarfs are difficult to track down and we know relatively little about them. They are just too dim.

Today’s paper is helping to change that for two M-dwarfs at a time. The figure below shows the discovery light curve of the eclipsing binary HATS551-027: two very low-mass stars orbiting each other every 4.1 days. This is only the third system like this we have found that lets us study both stars in great detail. 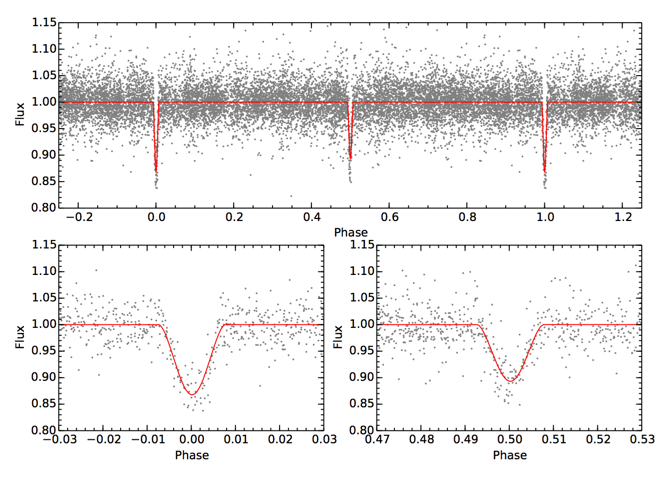 Discovery light curve of a new pair of very low-mass M-dwarfs in an eclipsing binary. These observations of HATS551-027 is from the HATSouth survey. The authors of today’s paper use this light curve together with lots of follow-up observations to characterize the pair of stars as robustly as possible.

Very low-mass M-dwarfs (less than a third as massive as our Sun) are a missing link in our theory of stellar interiors. Current theories suggest that stars this small have fully convective interiors. In other words, the only way energy is transported inside the star is through convection, not radiation. In contrast, radiation takes over in the cores of more massive stars, including the Sun. Modeling a fully convective star is tricky! We don’t have a complete understanding of how it affects global properties like radius or temperature. It’s important to get right, if for no other reason because lots of exoplanets orbit M-dwarfs, and you can never hope to learn the secrets of a distant planet if you don’t understand its host star.

Shortly after HATS551-027 was discovered, the authors of today’s paper began an ambitious suite of follow-up observations. They obtained images with two additional telescopes and spectra from three. As any observer can tell you, combining data from five different configurations of telescope + instrument into a coherent picture takes a lot of work and double-checking for consistency. But the great thing about eclipsing binaries is you can use observations like these to model star brightness and motion and measure important properties like mass and radius.

In the end, the authors find that both stars are cooler and somewhat larger than theoretical models predict. They report the cool temperatures are consistent with other very low-mass M-dwarfs measured previously. A comparison of HATS551-027’s masses, radii, and temperatures compared to the only similar eclipsing binaries known and four theoretical models is shown below. 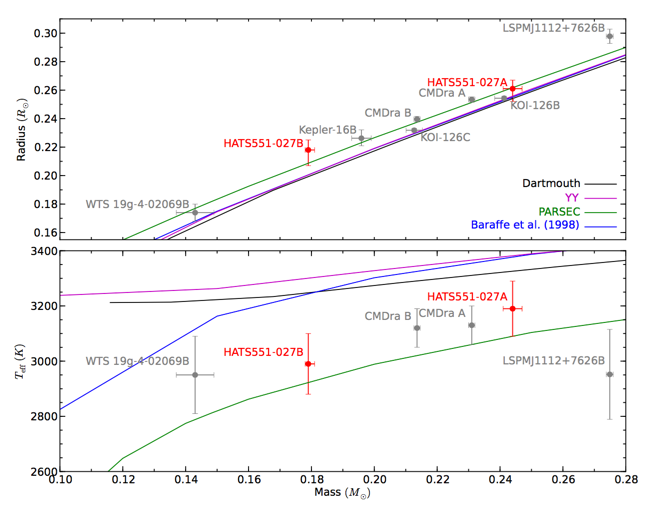 How do M-dwarfs measure up in radius (top) and temperature (bottom)? The stars of today’s paper, HATS551-027A&B, are plotted in red, and four other very low-mass stars in eclipsing binaries are plotted in gray. Theoretical models are plotted as different color lines for comparison.

One other interesting feature of this binary is emission in the Hydrogen-alpha line in both stars’ spectra. Most stellar spectra show purely absorption lines, but many M-dwarfs do have Hydrogen emission. Previous studies have shown this to be an indicator of stellar activity. This makes sense here because the out-of-eclipse brightness varies significantly, which points to star spots. Some have even suggested that Hydrogen emission may correlate with M-dwarf radii being larger and/or cooler than models predict. However, it is hard to say for sure with just a handful of well-studied M-dwarfs. The hunt for more eclipsing binaries with very low-mass stars continues.