Yeah, I know I might be sounding a bit repetitive… but this particular dust is really pretty. Take a look at Figure 1 to see what I mean. 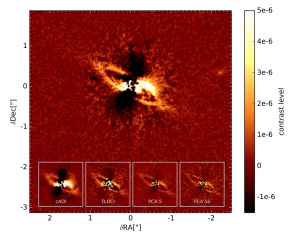 Figure 1: The processed image of multiple dusty debris rings around the star HIP 73145. Three rings can be seen around the star. The four inset images show different reduction algorithms, where the same structure is extracted. Figure 1 in the paper.

Today’s star of interest is HIP73145. It’s a young (~15 million years, compared to our Sun’s 4.5 billion years), very bright A-type star. The dust around this star has been studied several times before. It was inferred from an infrared excess in 2006, and then subsequently directly imaged in the infrared in 2015. The debris has also been identified at radio frequencies by ALMA in 2016. The detection in today’s paper is carried out with the VLT, at near-infrared wavelengths. This detection is special because it is the first time substructure has been observed in this disk, and one of the first ever detections of multiple, separate rings in a debris disk. Another recent paper had tentative evidence for a two-belt ring in a debris disk, but the image here is much more definitive.

It is worth taking a second to define debris disks – since there are actually two different types of disks that have been hitting the headlines recently! A protoplanetary disk is a very young circumstellar disk, consisting mostly of gas. A debris disk, meanwhile, is an older, evolved version of the circumstellar disk. In this case most of the gas has left the system, and it is dominated by dust. There have been several recent observations of rings in protoplanetary disks, most famously around HL Tauri by ALMA. HL Tauri is believed to be less than 1 million years old. Today’s target, HIP 73145, is roughly 15 million years, and has evolved to the debris disk phase of it’s lifetime.

If we take another quick look at Figure 1, hopefully you can make out the three distinct rings of dust. If you remain unconvinced, take a look at Figure 2, where the authors present a de-projected version of the disk, with each ring highlighted, and an intensity plot with radial distance. B1 and B2, the outermost two components, pop right out of the data. B3 is a little fainter but still visible, especially on the left right side of the image. The outer two rings are shown to be well-aligned concentric rings, with radii 66 AU and 96 AU. In solar system scales, that’s roughly twice and three times the orbit of Neptune, respectively. The third component is harder to constrain, as it is very close to the resolution limit of the instrument, and appears asymmetric. The authors are unable to confirm whether this asymmetry is a genuine feature of the system, or a spurious effect due to non-ideal observing conditions.

Figure 2, left: A de-projected image of the disk, where the axes have been stretched relative to the disk inclination, so that the disk appears ‘face-on’. In this image the separate disk components are highlighted. Right: a plot of intensity against distance from the star, where the same disk structures can be seen. Figure 3 in the paper.

None the less, there is evidence for at least two separate rings. The formation of separate rings in both protoplanetary disks (like HL Tauri) and debris disks (like today’s target) is a hot topic. Gaps are often inferred to be formed by the presence of planets, whose gravitational influence clears away small rings of dust, causing these structured images. However, the authors of our paper today note that there are many other possible causes of rings like these. They could be formed by magnetic fields causing turbulence in the disk, or formed by enhanced growth of grains near ice lines, where gases in the disk condense and freeze out, or even be induced by sintering processes, the process where grains stick together and form a larger lump of material. If grains in some parts of the disk are more ‘sticky’ than others for whatever reason (e.g. their temperature), these sections of the disk will grow faster. The direct observation, rather than merely inference, of several distinct rings allow these various mechanisms to be tested. With ring observations as well-defined as this, it may be possible to rule out at least some of the ring formation mechanisms, for this target at least. Such tests aren’t carried out in this particular paper, but I’ll certainly be looking out for future results on the subject!

Any particularly eagle-eyed readers among you might have noticed a faint blob in Figure 1 at -2.2 δRA and 0.3 δDec, and be wondering why I’m not giving this candidate more attention. There is indeed a candidate companion at this location but the authors rule it out as highly likely to be a background star, since photometry studies suggest it is far more likely to be a far away star than a nearby planet. So, no planets – yet. But whether or not the rings are caused by a faint planet that is still to be discovered, this target is yet another hint we still have a lot to learn from high contrast imaging of debris disks!