A lot of research in physics involves looking for something specific. Researchers at CERN were looking for the Higgs-Boson, members of the LIGO team have been looking for signs of gravitational waves and astronomers involved in exoplanetary observations have been and will be successfully looking for – guess what – exoplanets. However, sometimes it happens that researchers are looking without knowing what they’re looking for. The observation of the protoplanetary disk around HL Tau (also known as HL Tauri) is a great example of such a case. 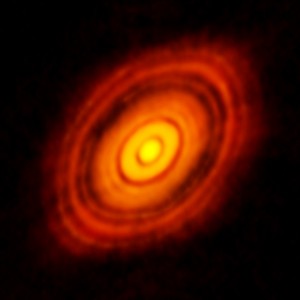 Figure 1: Image of HL Tau from 2014 press release showing ring structures in the protoplanetary disk around the star.

It is now one and a half years since the observation of gaps and rings in the disk of HL Tau astonished the world. The image was taken with the Atacama Large (sub-)Millimeter Array (ALMA) telescope in Chile. Astronomers certainly expected to see a protoplanetary disk around the host star, but nobody expected to see ring structures in the disk (Figure 1). Astronomers were and still are amazed by the image because the gaps and ring may be a sign of ongoing planet formation. Hence, astronomers are excited to see whether disks around other stars show gaps and rings too. Fortunately, thanks to the latest ALMA observations presented in todays paper, we can now answer this question with ‘Yes, but…’. 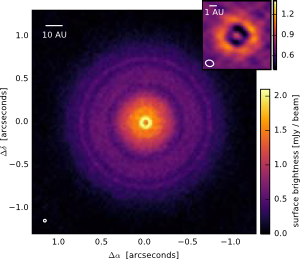 Figure 2: Image of the disk around TW Hya at 870 micrometer wavelength. The small figure in the upper right shows a zoom in to the inner inner part of the disk. The white circles represent the beam size. [Figure 1 in the article.]


The authors observed the disk of TW Hya (also known as TW Hydrae) at sub-mm wavelength (870 micrometer), which allows the emission from the dust to be seen. Light emission from the dust occurs when a photon collides with a dust grain. The dust grain absorbs the photon, but later emits a new photon of longer wavelength. The disk around TW Hya is the closest protoplanetary disk to the solar system that we have observed, which allows us to view it in record-breaking spatial resolution (as small as 1 AU, the distance between the Earth and the Sun). Similar to HL Tau, the disk shows clear signs of rings in the infrared, revealing that dust is trapped in concentric annuli inside the disk (Figure 2; for a video of the observation see here). What is particularly interesting about the rings in this disk is the fact that we can see a ring at very small radius, only 1 AU from the host star. Despite the fact that both disks show clear evidence for rings, the structures themselves are very different from each other. But such distinctions are only on first sight surprising. We believe that TW Hya is about ten times older than HL Tau, so the differences in their disks are to be expected (TW Hya is around 10 million years old, compared to less than 1 million years for HL Tau).

The observed rings in TW Hya are much weaker than they are for HL Tau, we can only see them clearly due to TW Hya’s proximity. To emphasize this, the authors point out that if TW Hya was located as far away as HL Tau (~140 parsecs instead of ~54 parsecs), the observations would only show weak signs of rings at a radius of 22 AU. Additionally, the authors show a plot of the observed brightness temperature as a function of radius (Figure 3). The red dashed line shows the expected temperature at the mid-plane of the disk. If no dust was present, we would measure this temperature profile. However, dust in the disk absorbs these photons and re-emits photons of lower temperature. You can see a change in the slope at 20 AU, which indicates that there is less dust beyond 20 AU. The authors suggest that inside of 20 AU – except for the ring at 1 AU – on average a photon is absorbed by the dust grains in the disk (in physical jargon: the inner disk is optically thick). 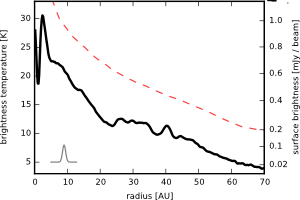 Figure 3: Average radial surface brightness around the star (black line). The red dashed curve shows the mid-plane temperature, which the authors calculate from an underlying model. [Bottom panel of Figure 2 in the article.]

Finally, the authors discuss several previous models and ideas that may explain the cause of the observed ring-structures. However, the reason for the gaps still remains an open question, and explaining them will remain a hot topic among protoplanetary disk theorists.