Preparing for the temperature drop at night

There is an old sci-fi movie “The Chronicles of Riddick” setting on a bizarre planet. One scene I still remember depicted the dawn on the planet. As the sun was rising (Yes, somehow not tidally-locked…), the frozen surface from the night suddenly became so boiling hot that it burned anything into ash within seconds. Fortunately, on Earth, the day-night temperature difference is much milder, usually less than 30 °C, because the atmosphere mitigates the temperature and that the Earth rotates fast (like making evenly grilled chicken by spinning).

Hot Jupiters, on the other hand, are extreme worlds. They orbit very close to their host stars (< 0.1 AU) and are locked by the tidal force into synchronous rotation, always having the same side facing their stars. This makes for interesting atmospheric dynamics. In today’s astrobite, we take a look into these exotic worlds. The authors examined what essentially controls the day-night temperature differences and compare their theory to numerical simulations (so called general circulation models or GCM).

The hotter it is , the faster it cools 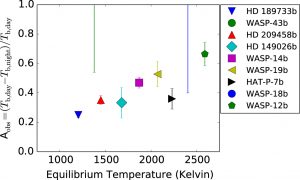 Scale analysis is a powerful tool for understanding which mechanisms play important roles. The authors use scale analysis to simplify the problem and construct the theory. For example, by looking at the continuity equation (Equation(16)), we can readily get  U/L ~ W/H. This tells us, the ratio of the horizontal wind speed (U) to the vertical wind speed (W) is about equal to that of the planet radius (L) to the pressure scale height (H). For a typical hot Jupiter, this ratio is ~ 100. In other words, the observable atmosphere is thin and the horizontal flow is much faster than the vertical motion.

Applying scale analysis to the set of primitive equations describing the atmosphere, the authors worked out analytical expressions for various quantities, like wind speed and day-night temperature difference. Before comparing with the GCM results, let’s briefly follow their analysis based on the governing law of the air movement – the conservation of momentum(Equation(14)). The gas motion has four contributing factors: gas flowing in or out (advection), planet’s rotation (Coriolis force), drag force (friction), and how the pressure changes spatially (pressure gradient). The pressure gradient is the driving force of the circulation, which has to be balanced by the others. Depending on whether drag, Coriolis force, or advection dominates, the atmosphere may be in different regimes and behave differently. When rotation is important compared to advection, the pressure gradient is balanced by rotation (weak-drag) or by drag force (strong-drag), but when rotation is negligible compared to advection (slow rotation or near the equator), the pressure gradient is balanced by advection (weak-drag) or by drag force (strong-drag). 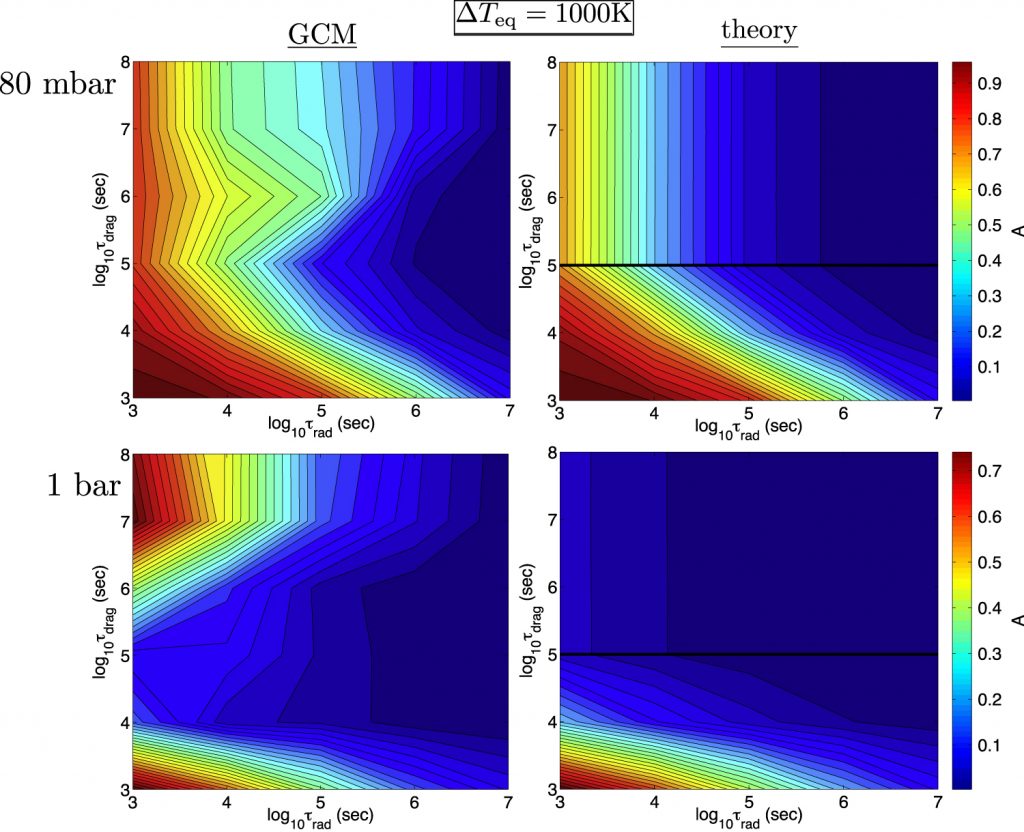 Figure 2. Overall day-night temperature difference (colors) as a function of radiative timescale and drag timescale, showing a comparison of the GCM results (left) and theory (right). The black line on the theory plots indicates the transition from drag dominant to rotation dominant. 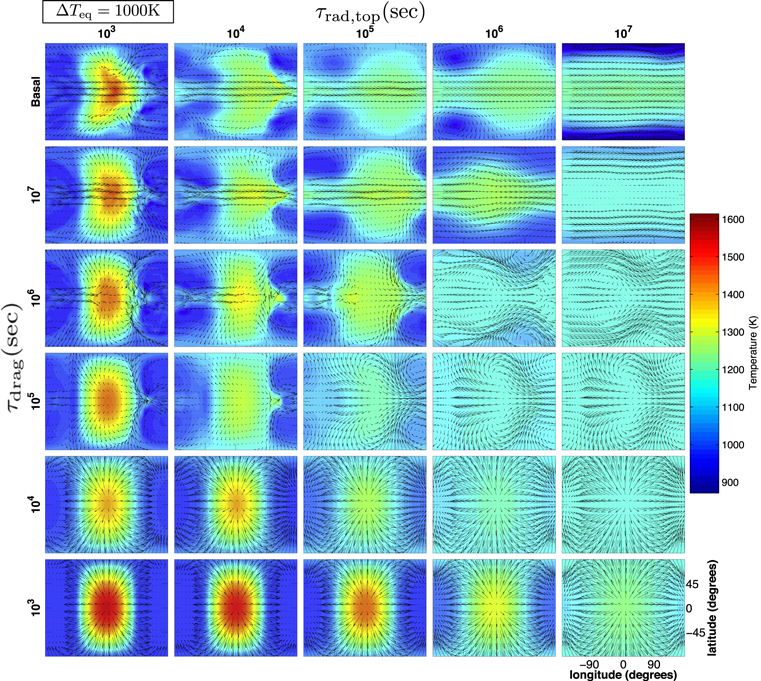 This simple scaling theory helps to understand the leading role of the dynamics and tells us a nice story about the physics behind it. It is always nice to see pen-and-paper solutions work and decipher the intricate results of computer simulations!