How long do quasars shine?

In the deep center of every massive galaxy, extremely massive but invisible black holes reign supreme. How these supermassive black holes (SMBHs) grew to boast of their 107-109 Msun masses still eludes us today. These massive beasts are awakened when surrounding matter spirals in and falls into them, creating active galactic nuclei (AGN) as luminous as our Milky Way. In this state, they spew out radiation from the radio to the X-rays. When the accretion of matter is particularly high, the AGN becomes very luminous and is called a quasar. (Here is a handy guide on AGN taxonomy.)

We believe that part of the reason SMBHs grow so massive is that they are fed by a voluminous amount of accreting material during the bright quasar phase. Even if some SMBHs appear dormant (i.e. no accretion of matter), it is believed that they must have gone through at least one quasar period in the past. Thus the quasar lifetime can shed light on the growth and evolution of SMBHs. Current estimates of the quasar lifetime are not very tight — they span a couple of orders of magnitudes from 106 to 108 years. These assume that black holes go through the quasar phase once, although it is possible that a black hole undergoes multiple quasar outbursts. Multiple episodic lifetimes would then sum up to the net quasar lifetime.

This paper examines the episodic lifetime of quasars using singly-ionized helium (He II) as the probe. At redshift z~3, most of the Helium in the Universe is singly-ionized. The last electron in He II can be knocked free by the powerful radiation from quasars. As a quasar ionizes its surrounding He II, one can imagine a sphere of ionized He II around the quasar that expands outward with the ionizing radiation. The longer the quasar shines, the larger this sphere becomes.


To find this, the authors carried out an intensive imaging and spectroscopic campaign in the vicinity of 22 background quasars at z~3 with 4m- and 8m-class telescopes including the Large Binocular Telescope (LBT), the Very Large Telescope (VLT), and the New Technology Telescope (NTT). They ended up with a final sample of 66 foreground quasars, the largest that has ever been used in such studies. There were multiple foreground quasars near any one background quasar. The authors first searched for the proximity effect in individual background quasars (an example is shown in Figure 1), but failed to detect any signal. But don’t lose heart, as stacking the spectra can reveal the hidden signal.

The authors stacked their spectra at the positions of foreground quasars whose ionizing radiation passes a certain cut — this gives them an average He II transmission profile, as shown in Figure 2. The stacked profile shows a clear transmission spike with 3σ significance. In order to ionize the He II gas, the quasar had to shine for at least the transverse light-crossing-time between the foreground and background quasar. The authors stacked quasar spectra for a range of transverse separations from the background quasar. The maximum separation where the proximity effect persists gives a lower limit on the quasar lifetime. The proximity effect is found to persist up to > 25 mega light years for their sample, translating to a minimum 25 Myr for the quasar lifetime. 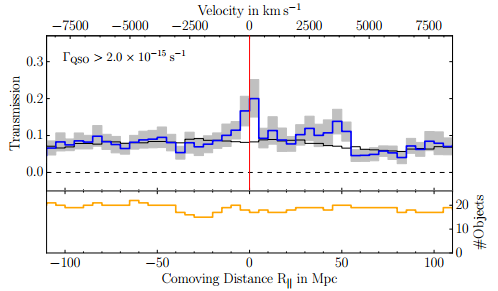 Fig. 2 – Stacked spectra of foreground quasars whose ionizing radiation passes a certain cut (indicated top left). The red line indicates the position of the foreground quasars, where an increase in He II transmission can be seen.  The thin black line is an estimate of the mean He II spectrum in the intergalactic medium, while the bottom panel shows the number of foreground quasars that are used in the stacking process. [Figure 7 in paper]

Since the authors ran out of foreground quasars at larger separations and implemented a cut on the quasar ionizing radiation, the intrinsic quasar lifetime could actually be longer than 25 Myr. To probe longer lifetimes, one would need a larger sample of foreground and background quasars. More sophisticated modeling would also provide richer interpretation of the data beyond a simple lifetime constraint. In any case, this study is the first to be able to detect the proximity effect in any ion (previous studies have detected the proximity effect in neutral Hydrogen). It also places stronger constraints on the episodic lifetime of quasars than any past studies of the same nature.