Gemstones askew in the heavens

In today’s article I want to take a closer look at gravitational lenses and open a window on some of the interesting science astronomers are using these objects for.

A gravitational lens results from a chance alignment of two galaxies, one near and one far. To understand how it works, we need to take a brief tour through Einstein’s General Theory of Relativity – but don’t panic! I’ll keep it light. In his landmark theory, now over a century old, Einstein outlined the mechanism by which gravity acts. Rather than being a fixed background against which events happen – a sort of cosmic stage – space itself can be warped and stretched by the presence of mass. The more massive the object, the stronger the distortion. The upshot is that anything following a straight path through space, such as a light ray, finds itself travelling a curved path instead when it passes near a mass – as if a force was acting directly upon it. It’s this apparent force that we call gravity. This effect was used in 1919 by Sir Arthur Eddington to confirm the predictions of General Relativity, to much excitement and confusion; during an eclipse, Eddington measured the angle through which the Sun’s gravity deflected the light of distant stars, showing that this matched the theory. In special circumstances, the same effect can focus the deflected light rays, just like a traditional lens (see figure 1). 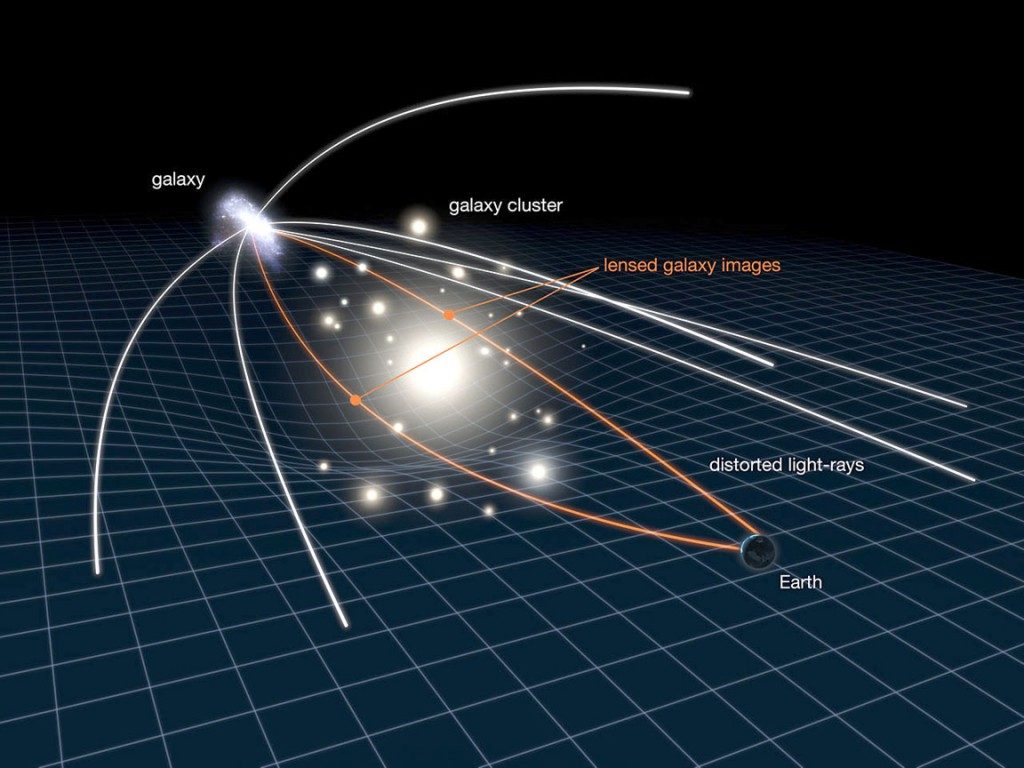 How gravitational lensing works. Large concentrations of mass (such as a galaxy or cluster of galaxies) can deflect light from a background object, focusing it on the observer’s position. Credit: NASA/ESA

In more recent times, the study of galaxy-sized gravitational lenses has been particularly fruitful – as we’ve documented before. The immense mass of a galaxy is sufficient to focus the light from a more distant partner (as in figure 2), magnifying the background galaxy and allowing us to study it in much more detail than would otherwise be possible. On the other hand, the precise pathways through which the lens deflects light can encode information about the foreground galaxy (the one doing the lensing), telling us about its structure. This is the approach pursued by the authors of today’s featured paper. 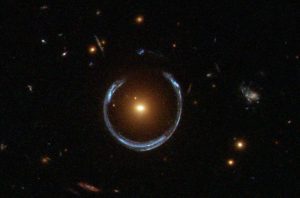 An obligatory Hubble image of an ‘Einstein Ring’. A blue galaxy is being dramatically lensed by the orange foreground galaxy – much nicer than images of distant galaxies from the featured paper!

This one’s a real gem

The system studied by the authors, ‘the Ruby’, is particularly unusual. Part of the GEMS sample (Gravitationally Enhanced subMillimetre Sources – another one for the collection of dubious astronomy acronyms), it is one of only a handful of lenses where the foreground galaxy is not local. For those who speak redshift, it’s at z=1.525, which means the Sun hadn’t even formed yet when the light from the background galaxy shot past it (and indeed wouldn’t for another few billion years). In most other lenses the foreground galaxy is close enough that it doesn’t have time to change appreciably while its light travels to us. That’s the key point here: this particular system offers an opportunity to understand the structure of a massive galaxy at a much earlier cosmological epoch.

Right, so why is that interesting? Well, one of the principal limitations to our understanding of galaxy formation is the brute fact that we can never really watch a galaxy evolve over time: we only ever see a snapshot of a particularly galaxy at a particular time in its life. We can try and connect galaxies in the local universe to those which are more distant, identifying common features and trends which offer clues to how galaxies evolve in the general sense. We can run simulations which approximate the important physics and test how galaxies evolve in those, too. But we’re always limited by the leap from distant galaxies to local ones. Anything we can use to try and connect the two is of interest.

Galaxies like the Ruby’s foreground lens are thought to be the precursors of the most massive local galaxies. They are characterised by rapid star formation in the early universe followed by a long, passive period where they form few stars. This rapid burst of activity leads to important differences in the stars hosted by those galaxies from those in our own Milky Way. In particular, as outlined here, local massive galaxies seem to have formed an excess of dwarf stars, which are dim and long-lived. These galaxies are more massive than we might guess simply from how bright they are, since they have extra stars which don’t contribute much to the total luminosity. But hang on … if a galaxy happens to be a gravitational lens, we can figure out how massive it is from the way it deflects light from the background galaxy!

The lensing arcs/rings actually comprise several images of the Ruby which have taken different paths through the lens. The authors try to match points within these images to common points of origin. This tells them the precise way in which the lens deflects the Ruby’s light, which provides the information necessary to build a model for the mass distribution of the lens. Put another way, they reconstruct both what the Ruby looked like before its light passed through the lens and what distribution of mass is required of the foreground galaxy in order to create the images actually seen. This is depicted in a bit more detail in figure 3.

Modelling the lens. The left panel shows the best-fit model (grey pixels) with red contours representing the data (observations taken with ALMA). The right panel shows the rotational profile of the background galaxy (the Ruby) as viewed through the lens. The important thing to take away is that blue points in different images of the source (the annotated numbers identify separate images) correspond to the same point of origin in the background galaxy, and the same for red points. This information is used to reconstruct the lens galaxy’s mass distribution. The orange and blue lines correspond to features of the model geometry, but are not crucial here. Figure 3 from the paper.

Following this method, the authors infer that the foreground galaxy is indeed more massive than might be expected from its brightness alone, indicative of an excess of dim dwarf stars. This is consistent with results from galaxies in the nearby universe, which have undergone billions of years of additional evolution, forging a crucial link between local galaxies and their antecedents. It’s clear that gravitational lensing observations have much to offer this field. Let’s hope the best is yet to come!

Putting a ring on it: a newly discovered Einstein ring