Let’s have another look at the cover image, which depicts the Hubble Frontier Fields of the galaxy cluster MACS J0416. 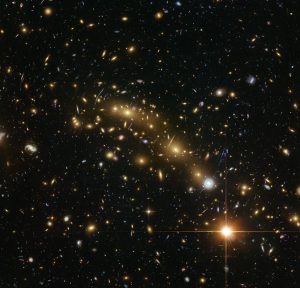 It always amazes me to see the manifestation of gravitational lensing in deep Hubble images – light from very-far-away galaxies being magnified and stretched into arcs by the strong gravity of the quite-far-away galaxy clusters. The gravity of the galaxy clusters acts as a “natural telescope” that focuses light to reveal background galaxies, which otherwise are too faint to be seen.

Astrophysicists have been puzzling over the mystery of reionization. How did reionization occur and what sources caused it? To try to answer these questions we need to know the origins and the properties of the early, far-away galaxies that were responsible. Recently, it was found that the huge number of faint galaxies may provide enough photons to reionize the Universe. The technique of gravitational lensing comes in very handy because it allows far-away and faint objects to be observed!

Directly observing galaxies during reionization (with redshift z > 6) is hard. They are extremely faint and the strong characteristic spectral lines lie outside the limits of our detectors (no worries, JWST will come to rescue!) One way astrophysicists get around this problem is to study objects with slightly lower redshifts at z ~ 3, which are the younger analogs of the sources reionized the Universe. Today’s paper follows this approach.

Typically gravitational lensing reveals far-away galaxies. Today’s story is extraordinary, the authors managed to unravel two star clusters at redshift z = 3.2 by the lensing technique, and derived important hints about the ionization history of the Universe. 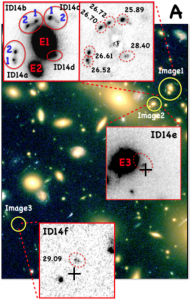 Figure 1. HST color image of the galaxy cluster MACS J0416 (middle section of the Featured Image.) The insets show the six images of the object ID14 (marked a to f). The annotated numbers are the magnitudes of each component. [Figure 1, panel A of original paper.]

OK, let’s get into the beautiful observations. Figure 1 shows the the middle section of the Featured image, again centered at the galaxy cluster J0416. The insets (Image1, 2, and 3) are the multiple images of the object ID14 generated by the gravity of the J0416. Image 1 is further magnified into four additional images ID14a,b,c,d by the elliptical galaxy pair E1 and E2 (ID14 is therefore called a doubly lensed system). Each ID14 image has two components, marked “1” and “2”.

Figure 2. Spectra of ID14 taken by the MUSE instrument of the Very Large Telescope. The colors of the spectra denote contributions from different images (black is sum of ID14a,b,c; red is ID14b,c; blue is ID14a-only.). The main features are the strong metal lines and the weak Lyman-alpha line. [Figure 2, panel E of original paper.]

Spectra of ID14 are shown in Figure 2, with different colors representing contributions from different images.  The magenta spectrum is taken from a Lyman-alpha emitting region ~2.1 kpc away from ID14 at the same redshift (magenta ellipse, Figure 3). Two main points to take away. First, there are multiple strong high ionization lines (from highly ionized atoms He+, C2+, C3+, O2+) characteristic for energetic ionized environments; second, there is a weak Lyman-alpha emitting region not too far from ID14. 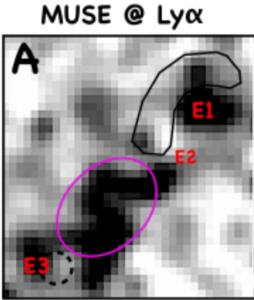 Figure 3. Image showing the Lyman-alpha emitting cloud (magenta ellipse) near ID14a,b,c (black arc). The separation is estimated to be ~2 kpc. [Figure 2, panel A of original paper.]

By analyzing the images in Figure 1, the authors find that the source ID14 comprises two compact systems with sizes of ~30 pc each, separated by ~300 pc. Also, the line ratios measured from the spectra (Figure 2) are consistent with a stellar population. Further modeling of additional spectra gives a mass estimate of 106 – 107 solar masses. These suggest that ID14 consists of two ancient, compact, young, and massive star clusters – commonly referred to as super star clusters.

It is intriguing to see star clusters so far away. What’s more? ID14 also hints at the structure of ionizing radiation in the early universe! With the observed Hβ spectral line (not shown, see Figure 3 of original paper), the Lyman-alpha line is predicted to be >150 times brighter than currently observed. Such deficiency can be explained by (1) dust absorption and (2) Lyman-alpha photons being scattered out of observer’s line of sight by irregular distributions of gas. The authors proposed a plausible picture where ionizing radiation escapes the star clusters and hits the neutral cloud nearby, where we see the Lyman-alpha emission in fluorescence (Figure 3). This finding suggests that direction-dependent visibility of ionizing radiation observed in galactic scale could also prevail on the scale of star clusters.

We astrophysicists are cosmic detectives. By combining our advanced telescopes with the natural gravitational lenses, we are able to grasp information which would otherwise be out of reach. Today’s story highlights that reionization is really an incredibly complex problem, one that connects tiny star clusters to the scale of the cosmos. More and better observations will further constrain the properties of the ionizing sources and help us uncover the process of reionization!