Hidden water in the deep atmosphere of Jupiter

The search for extrasolar planets has become one of the most popular topics in astronomy in the last two decades. While we are fascinated by the diversity of the extrasolar systems, the fact remains that there are still many mysteries that exist within our own Solar System. Our largest planet, Jupiter is an example of one of these mysteries, with an interior structure and the storm colors that are not yet fully understood. In today’s paper, we are taking a look at the bulk oxygen composition of Jupiter.

Oxygen is the most abundant element in the Solar System after hydrogen and helium. Unlike on Earth, where most of the oxygen is bound up in molecular oxygen (O2), water is the main oxygen-bearing gas on Jupiter, so astronomers consider water as a proxy for the oxygen abundance. More specifically, people try to determine the oxygen abundance in the deep atmosphere to sample the bulk oxygen content in the interior. This oxygen inventory is important because it contains information about the giant planet’s formation and the original material that our Solar System formed from, known as the protoplanetary disk.

Unfortunately, it is difficult to measure water directly because water vapor begins to condense and form clouds at higher levels (a few bar pressure). This makes it difficult for infrared light to penetrate. The good news is carbon monoxide (CO) has been observed in Jupiter’s atmosphere since the 1970’s, and chemistry can help us to indirectly infer the deep water abundance, except that the CO abundance should be too small to be detected! 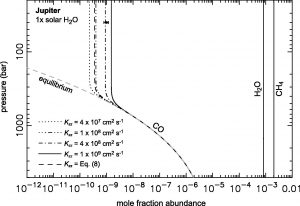 Figure 1a: Vertical profiles (with lower pressures correspond to higher altitudes) of CO, H2O, and CH4 in Jupiter’s deep atmosphere for a fixed solar abundance, and with various Kzz (different line styles for CO). (from Visscher et al. 2010) 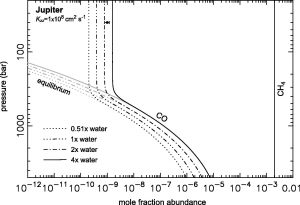 Figure 1b: Same as Figure 1a, but with a constant Kzz and various solar abundances (different line styles for CO). (from Visscher et al. 2010)

Dependence on mixing and composition

In chemical equilibrium, the fractions of all species can be simply determined from its temperature, pressure, and the elemental composition. At the cold temperatures in the troposphere of Jupiter, the equilibrium abundance of CO is negligible (<10-10), but in the deeper atmosphere, as the temperature becomes warmer, CO is more stable and its equilibrium abundance becomes much higher (see Figure 1a). The detected higher abundance of  CO in the troposphere is actually mixed from the deeper part, and the constant abundances of CO (straight lines) in Figure 1a tell us where they are well mixed. This mixing process is mainly due to convection and referred as a disequilibrium process, as the mixing kicks the CO out of chemical equilibrium.

In modelling, Kzz is commonly used as a parameter of eddy diffusion, representing the degree of  mixing due to convection. It essentially controls how deep the equilibrium CO is being dredged up and becomes well mixed above. Therefore, larger Kzz (stronger mixing) results in higher disequilibrium abundance of CO. On the other hand, increasing the elemental oxygen abundance can also increase the equilibrium and disequilibrium abundance of CO, as shown in Figure 1b. Apparently the mixing process creates degeneracy with the oxygen abundance. We have to pin down one to resolve the other. The authors apply mixing length theory to estimate Kzz. Once Kzz is obtained, we can constrain the deep (equilibrium) abundance of CO, and hence the oxygen inventory. This same practice can be performed for Saturn as well. 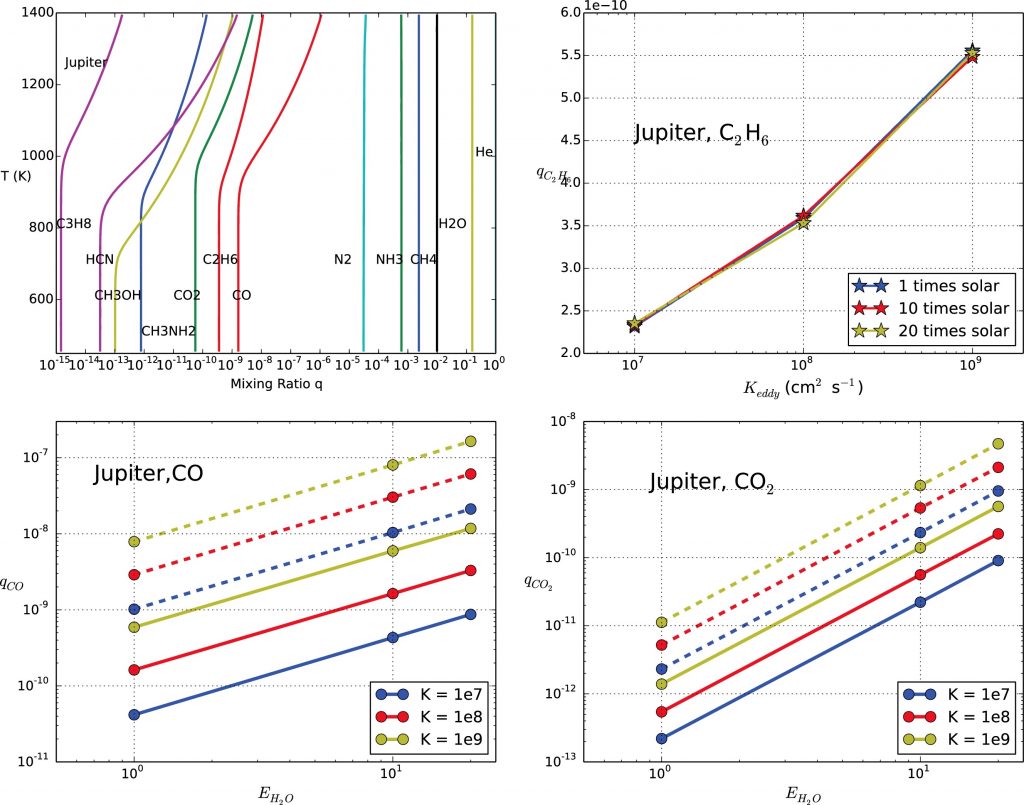 Figure 3: Lower left: predicted mixing ratio of CO as a function of the water enrichment EH2O (the elemental oxygen abundance relative to solar value) for different Kzz. The dashed and solid lines are computed from two different chemical networks. Upper right: Same but for C2H6 (from the featured paper)

A tracer for mixing could be handy

However, there are still obstacles along the way. One is the uncertainty in the chemical rates related to CO, which determine how fast it is produced/destroyed via chemical reactions. This in turn controls disequilibrium abundance. In Figure 3, the authors demonstrate the differences in the derived deep water abundances by utilizing two different chemical networks (for a specific Kzz, draw a horizontal line for the detected CO (~10-9) mixing ratio. The two resulting intersections are the water abundances from the two networks). For the two networks, the predicted water abundances differ by more than one order of magnitude! The authors are able to identify the source of this discrepancy to be one specific reaction. Determining which reaction reaction rate is correct will require additional laboratorial work.

In addition, C2H6 has no dependence on the oxygen abundance (upper right in Figure 3) and is only sensitive to Kzz. It can be used to directly constrain the degree of vertical mixing if detected, instead of estimating it from the convection theory. Similar to C2H6, the authors also found GeH4 to be only sensitive to Kzz, which makes it another potential tracer for convective mixing.

With the measurement by the Juno mission, the study of the dependence of convective mixing and the disequilibrium species should provide better constraints on the water (oxygen) inventory of Jupiter. This would tell us more about the conditions in which the planet was formed.