Title: An Observational Upper Limit on the Interstellar Number Density of Asteroids and Comets

Gas and dust permeate interstellar space, and the current picture of planetary system formation hints that larger objects should also occupy the space between the stars and even enter our solar system. The question is—how many?

In our current understanding of how planetary systems form, most of the material in the nascent protoplanetary disk is lost to interstellar space; the strong winds of young stars expel the raw material for planet formation to interstellar space, and gravitational interactions between planetesimals eject many would-be planets. In the solar system, our best bet is that the giant planets migrated from their birthplaces to their current positions, disturbed the orbits of planetesimals—asteroids, comets, and possibly even other young planets—and launched them from the solar system.

If giant planets in other planetary systems undergo similar migrations, interstellar space should be teeming with rogue planetesimals and debris. These wayward objects could encounter the solar system and become entangled in the gravitational web of the Sun. In theory, their unusual trajectories or compositions would give clues as to their extrasolar origins. However, there are no confirmed discoveries of interstellar objects masquerading as members of our solar system.

In this paper, the authors use the fact that we don’t observe interstellar objects (ISOs) to place an upper limit on the number density of these objects in the Milky Way. (Here, number density means the average number of ISOs per cubic astronomical unit.) Knowing the prevalence of ISOs is important because it can tell us more about the early stages of planet formation and our chances of finding interstellar interlopers in the solar system. 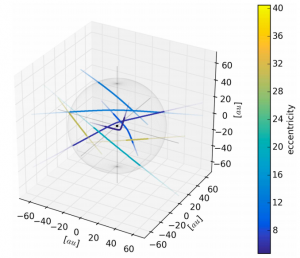 Figure 1. A sample of eight modeled ISO trajectories. The Sun (black dot) is located at the origin. Distances are given in astronomical units and the color of the trajectory indicates its eccentricity, with yellower lines being more eccentric. (From Figure 1 of this paper.)

To make an estimate of the ISO number density, the authors modeled a synthetic ISO population distributed throughout the solar system (Figure 1). They then determined the likelihood of these objects being detected and identified as ISOs given the observing capabilities of three solar system surveys: Pan-STARRS1, the Mt. Lemmon Survey, and the Catalina Sky Survey. In order for an object to be tagged as a possible ISO, it must be bright enough to be detectable and have an atypical enough trajectory to be tapped for follow-up observations. This method allowed the authors not only to place an upper limit on the number of ISOs, but also to hint as to what we might glean from the objects that we detect.

The authors found that the ISOs detected by the surveys in their simulations have different characteristics from the input population. This is largely due to the limitations of the surveys; objects fainter than the limiting magnitude or moving very quickly or very slowly will evade detection, which limits the sizes and orbits of objects that will be detected. The results also depend upon whether or not the objects display comet-like behavior—sublimating and brightening as they travel close to the Sun. For example, Figure 2 compares how far the simulated (left) and detectable (right) ISO populations are from the Sun.

Figure 2. Left: Distances from the Sun for the computer-generated ISOs (gray) and the modeled potentially observable objects (black). Right: Distance distribution for ISOs detected in the simulation of survey observations. The black and gray lines represent the observed distributions for ISOs with and without comet-like activity, respectively. Note the change in the horizontal scale between the panels. ISOs with comet-like behavior can be detected out to much greater distances than ISOs that are purely asteroid-like. (Adapted from Figures 3 and 5 from this paper.)

To date, no survey has definitively identified any object with the unusual trajectory and composition expected of an ISO. This could mean that our assumption that other planetary systems form similarly to our own—with gas and ice giants ejecting planetesimals as they migrate—is fundamentally flawed. Another possibility is that we don’t yet understand how a captured object would behave within the confines of the solar system. As a result, it’s possible that past surveys detected ISOs, but they were ignored based on our current search criteria. Future surveys, such as the one that will be conducted using the Large Synoptic Survey Telescope, will have greater detection capabilities for solar system bodies, increasing our chances of observing ISOs passing through or trapped within the solar system.