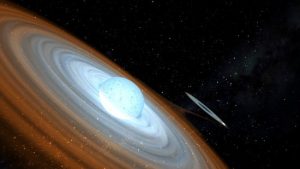 Figure 1: The double-discs of a Be/X-ray binary. In the foreground is the Be star, throwing off matter into an equatorial ‘decretion’ disc. Further away, some of that material is pulled towards the neutron star companion, forming an accretion disc. Credit: Gabriel Pérez – SMM (IAC).

Stars are like people — they act very different in company from the way they act alone. Interacting binaries are systems in which two stars orbit close together, so that their evolutions are intrinsically linked. They are the hosts of a plethora of astronomical phenomena: type Ia supernovae, millisecond pulsars,  cataclysmic variables, common envelopes, and contact binaries are all only possible in interacting binary systems.

Among these systems are X-ray binaries. These are accreting binaries — systems in which material is flowing from the less massive star (the ‘donor’) onto the more massive star (the ‘accretor’). In the case of X-ray binaries, the star on which the matter is falling is a neutron star or black hole. The infalling material spirals towards the accretor, forming an accretion disc. Friction in the disc heats it up until it is hot enough to produce the bright X-rays that name this type of system. Similar accretion discs are seen throughout astronomy — in cataclysmic variables, active galactic nuclei, and protoplanetary systems, to name a few varieties — but are pretty hard to model, so there’s a great deal of interest in exploring the different varieties they come in.

In the standard X-ray binary model, material is pulled from the atmosphere of the donor star by the accretor’s gravity. Today’s paper is about Be/X-ray binaries, a special case in which the donor star is a Be-type star and the transferred material is a stellar wind. A Be star is a star spinning so fast that it throws some of its own matter off into space. Put a Be star into orbit around a neutron star, and some of that expelled matter will fall towards the neutron star — and voilà, you have your accretion. The orbits of these systems are often elliptical, meaning that at some points in their orbit the stars are close together (resulting in a higher accretion rate and an extra spurt of X-ray emission) and at others they are further apart (causing a dip in the X-ray emission).

Slowing Down or Speeding Up? 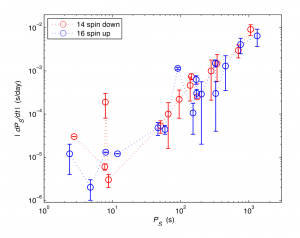 Figure 2: Both spinning-up and spinning-down neutron stars show the same dependence between the rate of change in their spins and how fast they are already spinning — the only difference is that some are speeding up by that amount, and some are slowing down by the same amount. This is Figure 2 from today’s paper.

The author’s of today’s paper compared results from a catalogue of Be/X-ray binaries in the Small Magellanic Cloud, all of which had their spin periods measured continuously between 1997 and 2014. Over that time, there were 53 binaries in which the spinning of the neutron star noticeably changed — either increasing or decreasing in period.

For those neutron stars whose spin is accelerating, there is a commonly accepted explanation. When the infalling material lands on the neutron star, it transfers any angular momentum it has to the star and spins it up. However, in the sample the authors were studying, they were surprised to find that nearly half of the neutron stars were ‘spinning down’ — their spin was decelerating. The surprise comes from the fact that we don’t know of any mechanism that can change the angular momentum of these stars as efficiently as the accretion process.

To investigate further, the authors compared the spin-up and spin-down rates as a function of the spin period of the neutron stars. You can see their results in Figure 2, in which is plotted the magnitude of the spin up/down against spin period. They found that both groups seem to follow the exact same pattern, but in opposite directions. A neutron star with a long spin period is likely to be either accelerating or decelerating sharply, whereas a neutron star with a short spin period is likely to have a much more gradual acceleration or deceleration. You could fit the same straight line through both populations in Figure 2.

The appearance of the same pattern in both groups of systems implies that the two populations must be linked, and that the processes driving their evolutions must be similar. This would mean that the accretion driving the spin-up in some systems must also drive the spin-down in others. The only way this could work is if those spinning-down systems have accretion discs spinning backwards — accretion discs that rotate in the opposite direction to the spin of the neutron star. The term for this is ‘retrograde’.

Such backwards-spinning accretion discs have been proposed before for a few individual systems, but never for Be/X-ray binaries. If it’s true, it could be very interesting for models of how these systems form and evolve, particularly if — as the authors suggest at the end of their paper — the accretion discs can switch between rotating with and against the neutron star. Today’s paper was only a short letter introducing the idea; it will be exciting to see where this goes next!