Title: Bayesian evidence for the prevalence of waterworlds

That might seem like an obvious statement, but it’s one of the observations that drives today’s paper.

It’s a provocative piece of work by Fergus Simpson, which attempts to understand – robustly and with Bayesian statistics – what we can infer about potential aliens based on the data point that is us. Given that we exist, and our planet is like this, can we infer anything about other planets that host intelligent life? This Bayes primer might be useful if you’re not familiar with the concept.

Simpson is responsible for the Big Alien Theory, where he predicts that aliens typically live on planets smaller than Earth and weigh around 300kg. For more on that, see the paper and his website explaining the idea.

This is a follow-up to that paper, with a focus on the water coverage of planets that host intelligent life.

Simpson first points out that the Earth is very finely water/land balanced: the surface has almost equal quantities of each exposed. Is there feedback that drives habitable zone planets towards being near this balance, or did we just get lucky? Although several possible methods for feedback are discussed in the paper, none seem powerful enough to make the majority of habitable zone planets have such a close balance of surface water and surface land.

Balanced planets seem like a good place for life: if there is very little water, most land become an arid desert, unable to support life. If a plant is entirely covered in water, there can be no land-based observers. The more non-desert land a planet has, the easier it is to evolve, and the more life there is. Simpson only addresses land-based observers – see the end of the article for details.

The paper looks specifically at the basin saturation. This is defined as the ratio between the volume of surface water and the volume of liquid required to cover half the surface of the planet. This gives us an understanding of how much of the planet is covered in ocean.

We can approximate the volume of surface water (water not tied up in the core of the planet) by multiplying four quantities:

We can then calculate the volume of liquid required to cover half the surface of the planet based on the surface area of the planet and the elevation profile across the surface. Combining these gives an expression for the basin saturation.

Simpson finds that our best understanding of these various quantities suggests that there should be quite a lot of variation in basin saturation between planets. He can use this fact to draw two conclusions.

The high level of variation in basin saturation suggests that most habitable zone planets are highly polarised: they are either arid deserts, or ocean-dominated waterworlds, as demonstrated in Figure 1.

Let’s make two assumptions. Firstly, the habitable land area is maximised if there’s a good water/land balance, which avoids the planet being dominated by either desert or ocean. Secondly, the greater the habitable area, the greater the number of observers. So most observers exist on planets with high habitable land area, and as such a fairly close balance of surface water and land. The distribution of ocean surface fraction, weighted by observers, is shown in the right of Figure 1. An observer is significantly more likely to observe their own planet being Earth-like, than to observe a random habitable zone planet being Earth-like, in terms of surface water. We’re not here on Earth just because Earth is habitable zone, we’re here because Earth has the right quantity of surface water for intelligent life to happen. As the paper states, “The Bayesian evidence for anthropic selection is substantial”. And planets with Earth-like surface water coverage are more likely to host life than random habitable zone planets.

Figure 1. Left: The distribution of planets by ocean surface fraction, as a function of μ, the median water mass fraction. The higher the curve, the more planets there are with that water mass fraction. Most guess for μ lead to either a majority of desert planets or a majority of waterworlds, and μ has to be carefully tuned for Earth to be ‘normal’. Right: The distribution of observers by ocean surface fraction (see text for an explanation) is much more favoured towards Earth. Figure 4 in the paper. 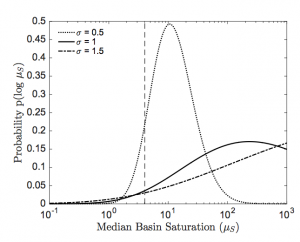 That was a mouthful! Basically, Figure 2 shows Simpson’s calculation of how likely planets are to be water covered. A higher probability means the associated median basin saturation value is more likely, a higher median basin saturation means more surface water on most planets. The three models (solid, dashed and dotted lines) represent three different guesses for the variability of basin saturation between planets. In all cases, Earth is unusually dry for a habitable zone planet, and we expect most habitable zone planets to be waterworlds.

Now, we expect that near-future missions (JWST, WFIRST, the E-ELT and the TMT to name a few) will reveal a lot more about the surfaces of habitable planets. These new data points will help to refine the ideas above, and allow us to update our understanding of the conditions needed to evolve intelligent life. Any biases, towards or away from Earth, will help us to understand why we evolved here on this particular piece of rock.

This next section comes from my brain, rather than from the paper. But I think it’s important that we present this in parallel with the paper. Bayes’ theory is a really interesting statistical tool, when used properly. But it’s worth discussing whether Simpson’s analysis is valid, and whether the underlying assumptions are correct. Points to note are:

My recommendation is to take this paper as an interesting statistical idea and a starting point for discussions, and not as the be-all and end-all for extra-terrestrial life.